G.Skill continues to release new DDR4 memory kits for Intel Skylake platform and of course we are happy about this fact. After a great Ripjaws V series we have a chance to test Trident Z whose design is simply exceptional. In this review we will present probably one of the most interesting memory kits for computer enthusiasts and gamers, the Trident Z 2x8GB DDR4-3200 CL16. Stay with us to find out how much you can expect from this memory and why it’s one of the best options on the market.

At the beginning one quote from G.Skill:

G.Skill Trident Z has been designed for 6th Gen Intel® Core™ processor and Z170 chipset. Height of the modules is 44mm / 1.73 inch. It’s more than standard height but still shouldn’t interfere with large air cooling solutions. I would still advise one to check if you have enough clearance. The Trident Z memory has one XMP profile and additional SPD profiles which you can see on the table below. XMP profile is working without issues on ASUS Maximus VIII Hero and MSI Z170I Gaming Pro AC motherboards.

Below you can read about other Trident Z features which were pointed out by G.Skill.

The New Level of Ultimate Performance

Designed for PC enthusiasts, overclockers, and extreme gamers, the Trident Z series DDR4 is built with specially screened ICs qualified under the legendary G.SKILL selection process, and rigorously tested for reliability, compatibility, and performance across a wide range of Z170 motherboards.

With wide range of available specs starting from DDR4-2800MHz all the way up to an extreme frequency of DDR4-4000MHz on first launch, Trident Z provides the fastest overclocking speed the world has ever seen.

Trident Z series maintains the aggressive fin design for highly efficient heat dissipation, while introducing an innovative dual-color heatspreader construction and a luxurious hair-line finish. Look no further for a memory that combines performance and beauty for building a stylish, modern PC!

Up to 64GB Ultra Capacity

No compromises! These extreme speed memory kits not only come in kits of 4GB and 8GB modules, a series of ultra high speed 16GB modules are available in Trident Z series too. Build your dream supercomputer with up to DDR4 64GB (16GBx4) of ultra-capacity at ultra-high frequencies!

Developed for the Ultimate Compatibility and Reliability

All Trident Z DDR4 memory kits are tested with G.SKILL’s rigorous validation process on major performance motherboard brands to ensure the best-in-class reliability and compatibility across the widest selection of motherboards. 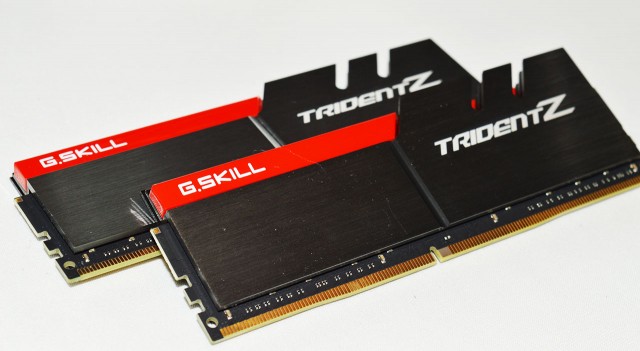 G.Skill Trident Z has been delivered in its retail packaging, which in this case, is a box. Inside that box is a clamshell offering more protection for the memory modules. Except memory itself, we can also find well known G.Skill sticker. The same sticker we can find in any other G.Skill memory kit.

The memory modules look great. Brushed aluminum heatsinks are black on one side and silver on the other, which gives them a pretty unique look. On the top there is a red plastic part which can be removed. I hope that G.Skill releases additional colors like blue, orange or maybe even yellow for ASRock OC Formula fans.

The 8-layer PCB has additional markings such as S.A or 8G 3200 what tell us that modules are original. Even if you can’t read label, then you know what to expect under the heatsinks.

The PCB is black which is quite common already. Red, blue or orange would be nice change.

Stability at rated speed has been tested using popular software, AIDA64. The built-in memory stability test is one of the best memory stress tests available. Additionally the software can test all other computer components but for our needs memory and cache tests were enough. G.Skill TridentZ 2x8GB DDR4-3200 memory kit had no problems to pass over five hours of tests at nearly full memory load.

Aside from AIDA64, the memory kit was also tested in many other tests and benchmarks. We had no problems with stability regardless what test we were performing on TridentZ memory kit. 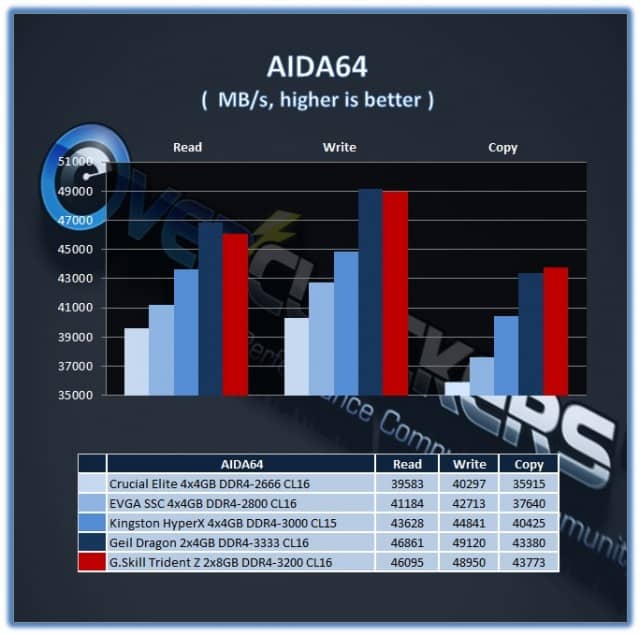 As usual, I’m starting with AIDA64 as it provides one of the best memory and cache benchmarks. AIDA64 is also performing tests in multi-threaded environment what is perfect to measure memory bandwidth on new platforms.

G.Skill Trident Z DDR4-3200 memory kit is performing well. We can see it’s not much slower than the DDR4-3333 memory kit which is also in our comparison. What is worth mentioning, if anyone missed it, the G.Skill memory kit is based on higher capacity modules. Motherboard manufacturers are generally testing higher capacity memory modules like 8GB or 16GB up to DDR4-3200 speed. This is also most popular limit for guaranteed stable frequency due to memory controller limitations. 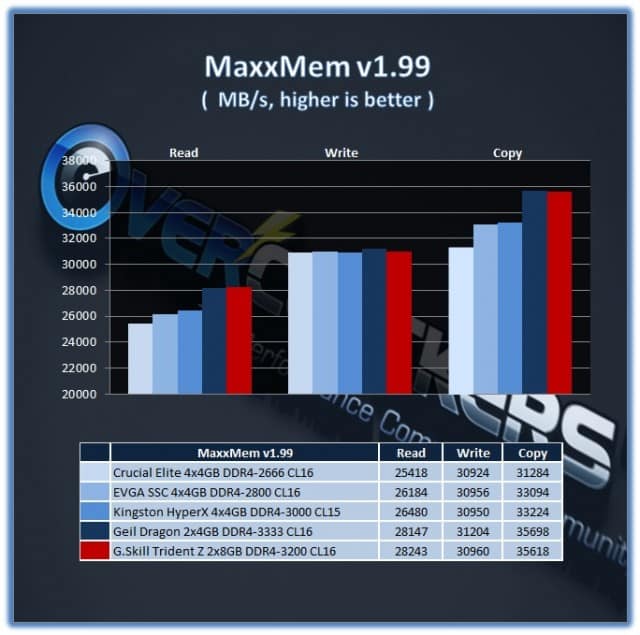 MaxxMem Preview is a bit dated but still good memory benchmark. It’s also testing memory in single threaded operations. As we see Intel Skylake is really fast comparing to previous generations. MaxxMem is showing us that even lower frequency memory is fast on this platform. However AIDA64 is showing us results closer to daily work because of load balance and multithreading capabilities in new applications.

Benchmark results are similar to what we see in AIDA64. G.Skill memory is about as fast as the Geil kit which is at a higher frequency. It tells us that XMP profile in Trident Z has been prepared well and tuned for higher performance. 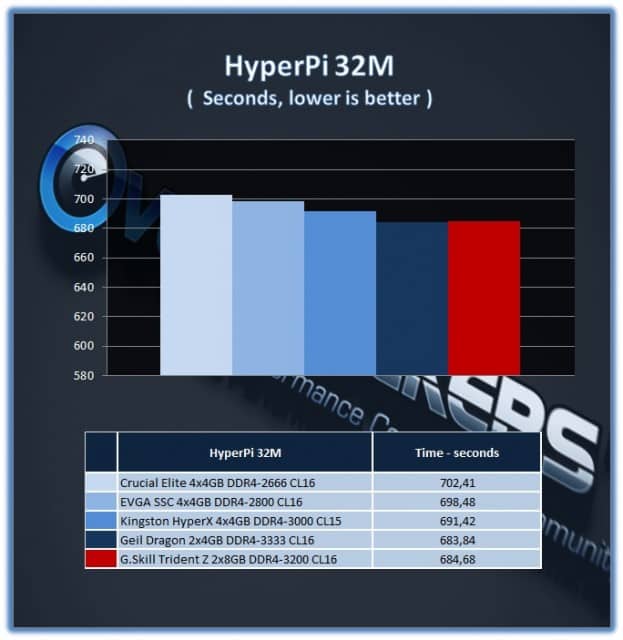 HyperPi 32M is showing similar results. This application is mainly used for competitive benchmarking and it clearly shows that higher capacity modules, like G.Skill Trident Z in our comparison, are good for overclockers. Lower capacity memory kits will be still more popular for competitive overclocking due to lower price but if you wish to buy one memory kit for everything then 2x8GB is a good option. 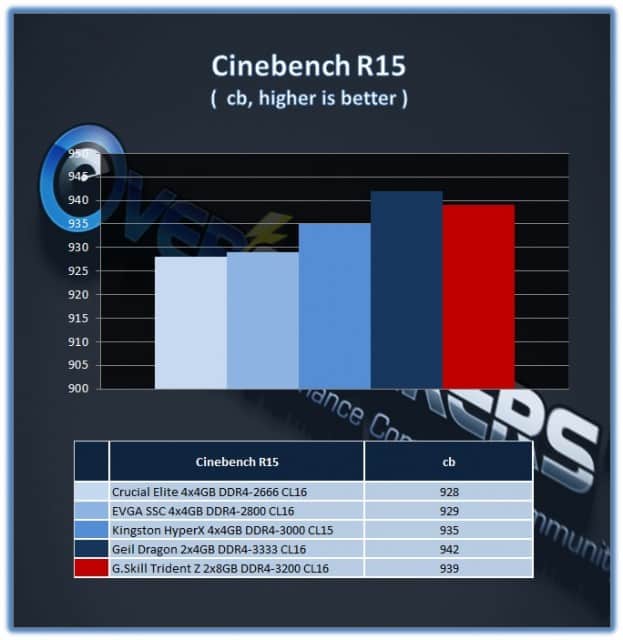 Now it is time for the second part of performance tests. I will start with Cinebench R15, the latest version of the popular rendering benchmark.

Memory is not affecting this benchmark as much as the aforementioned tests, but we can clearly see differences in memory frequency what matches our previous results in other benchmarks like AIDA64. Also here we can see that G.Skill memory is about as fast as higher frequency Geil. Simply a good result, particularly because higher capacity memory kits usually have more relaxed sub-timings. 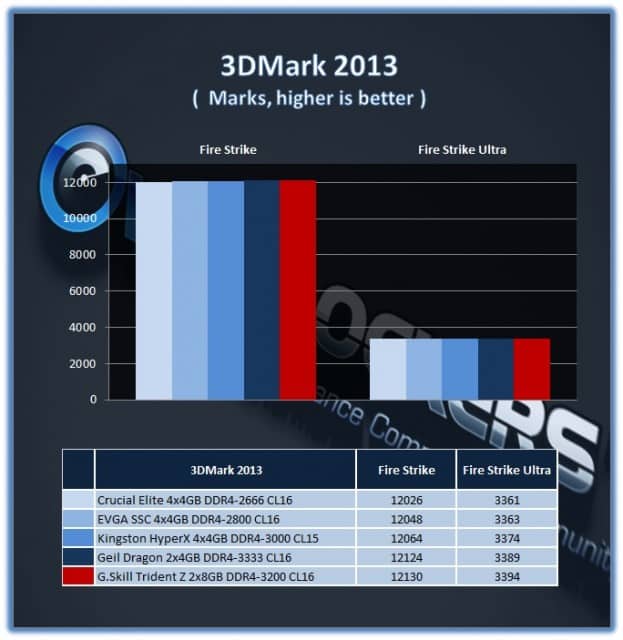 Next in queue are Futuremark benchmarks. First will be 3DMark, which has since has several newer versions released, but the version from 2013 is still a good indicator of performance. 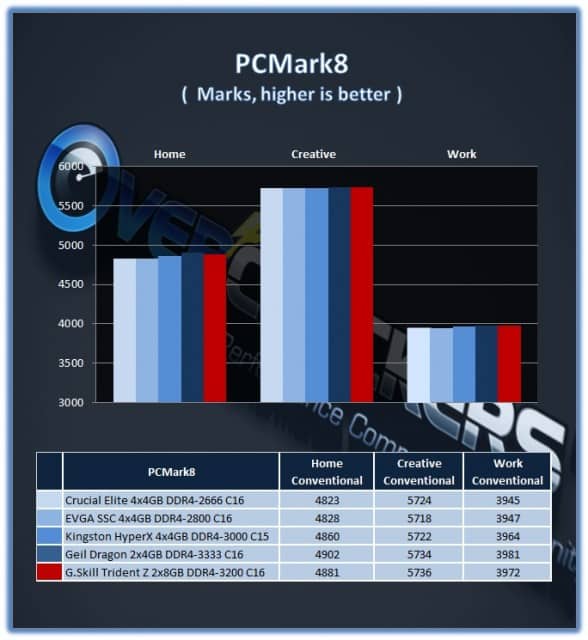 The PCMark 8 results are not too different. Even though we can see that higher frequency memory kits are better then all, results are similar. It’s related to already high speed of Intel Skylake platform where fast cache is helping to keep good access time to data.

Overall in all tests G.Skill Trident Z 2x8GB DDR4-3200 is performing great. There were also no problems with stability or performance in any test.

Now let’s move to the next part of this review – Overclocking, which will show how much you can still improve already high performance of G.Skill Trident Z memory.

Overclocking is never guaranteed so the presented results may vary from results on other memory kits. I am not recommending overclocking if you do not know what are you doing. High voltages may damage hardware and it will not be covered by warranty.

G.Skill Trident Z DDR4-3200 memory is based on Samsung IC and it overclocks well without any special settings. However a lot depends on the motherboard and its BIOS version. I was quite surprised to find out that ASUS Maximus VIII Hero with 1001 BIOS (the latest available) couldn’t run above DDR4-3333 but I could still keep CL 16-16-16 main timings. Good result but not really as good as I was expecting, so I decided to check how the Trident Z memory is acting on a different motherboard.

Below result has been achieved on MSI Z170I Gaming Pro AC motherboard. MSI designed this motherboard for gamers and it’s in ITX format so no one would expect it will overclock so well. As you can see I was able to set quite stable DDR4-3600 17-18-18-36 and command rate 1N. Voltage was set slightly above 1.45V so not really too high.

Results below are on a different motherboard and an i5 6600K CPU so you can’t really compare HyperPI 32M to previous results in this review but you can compare it at home to your i5 6600K or i7 6700K with Hyper-Threading disabled.

Processor the same as in all other tests in this review has been set to 4.2GHz and its cache also at 4.2GHz.

DDR4-3600 for 2x8GB kit is a great result but if you wish to know what else you can expect from Trident Z 16GB kit then check out the table below.

Performance is great and what’s more important is that we had no issues with stability or compatibility which often happens on Skylake with many other series (mainly from other manufacturers). XMP profile works well on ASUS and MSI motherboards on which I had chance to test it. The only weird thing is that overclocking potential is actually higher on MSI Gaming motherboard than on the board designed for overclocking, the ASUS Maximus Hero. I guess it’s all related to BIOS and soon we will see better results as updates are made available.

Now a couple of words about price and availability. We can find Trident Z in many online stores without problems. Available are memory kits up to DDR4-4200 but only in 2x4GB kits. If we wish to buy 2x8GB kit then we are limited to about DDR4-3400. However not all motherboards will support that frequency so better look at tested memory list on your motherboard’s manufacturer website. Tested in this review 2x8GB DDR4-3200 memory kit should work on all motherboards. It’s also not so expensive as we would think – about $140, which is reasonable considering it’s the highest available DDR4 memory series on the market. The same as all other G.Skill memory kits, also Trident Z has lifetime limited warranty and free support. Of course we all wish not need to use it but it’s always good to have that assurance.

G.Skill Trident Z 2x8GB DDR4-3200 memory kit has all we could expect from high-end memory series designed for most demanding users. It offers great looks, high performance, high overclocking potential, and is also inexpensive so it’s really hard not to recommend it. Simply one of the best options on the market if you are looking for an exceptional memory kit.

G.SKILL continues to push the envelope on speed, releasing a new DD4 memory kits up to 64GB capacity with tight CL14 timings and 3200MHz speed. This marks the fastest DDR4 64GB kit available to date. These should hit stores within the next few days. Read More

In December of 2019 Team Group released the T-Force Xtreem ARGB memory modules. This new addition to the companies’ gaming memory lineup features a radical new design with a mirrored heat spreader that is also opaque and illuminated from behind. In the modern DDR4 arena, companies are constantly breaking new ground with design elements to attract customers. They’ve done enough to attract our attention, but we’d also like to know how the memory performs. Read More

MSI announced today the release of their CPU Guard 1151 product to combat potential CPU bending when using heavier coolers. With the substrate of Skylake being thinner than that of the previous generation Haswell CPUs, larger coolers, specifically ones going beyond Intel’s 50 lb. pressure specification have been doing some damage. If you’re concerned, stick with spring-mounted heatsinks rather than bolts, or get yourself MSI’s CPU Guard 1151 shim. Read More