SUMMARY: Global Win’s latest heatsink is all copper and a solid entry to good Socket A/370 cooling, although NOISE is a problem. 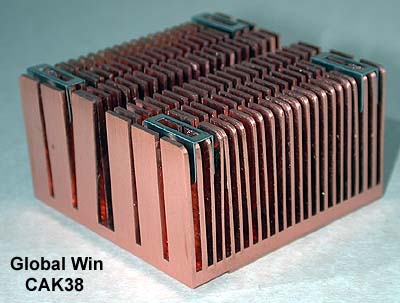 The good folks at Global Win were nice enough to send me their latest – the all copper CAK38, which can be used for Socket A and 370 both. This unit features the all too loud Delta 38 fan. You will see a LOT more copper and Delta 38s in heatsinks as the performance race continues. Next you may see earplugs being issued.

The CAK38 is compact – the body measures 1 3/8″ (35mm) high by 2 3/8″ (60mm) square. This is not an extrusion – it looks like the fins are saw cuts, so I think it was made from a solid copper block. It features 23 fins (about 10 per inch/25mm) by six rows. I weighed it at about 500 grams (18 ounces) – this is no lightweight. Once securely mounted, I don’t see a problem; however, shipping a heatsink this heavy on a motherboard could be a problem. Like so many heatsink, the clip is a finger buster; I recommend using a needle nosed pliers if you can. 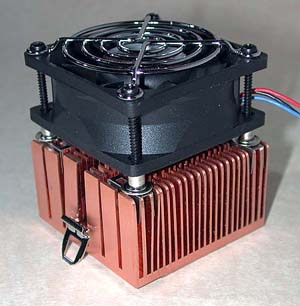 The CAK38 uses standoffs to raise the fan 5/16″ (8mm) above the fins. Now you might think that a lot of air comes out of this gap. Nope – not the case. In fact, the air flow from the BASE of the fins is quite good. I think this accounts for how well Motherboard Monitor tracks thermocouple temps, as the cooling effect from airflow over the socket periphery appears to be cooling the capacitors around the socket very nicely. I found a difference between thermocouples on the heatsink and CPU back of only 2.6 C; this compares to a more usual difference of about 8-12C.

I prepared the CAK38 by boring a hole through the base so I could epoxy a thermocouple above the CPU. The thermocouple is attached to an Omega HH23 Digital Thermometer. Ambient temps were measured with a thermocouple placed about 1 inch from the fan’s intake. I used Prime 95 to stress the CPU on an ABIT KT7, running a Duron 800 @ 1000 (63.1 watts/1.9v), and a Celeron 533 @ 800 MHz (19.9 watts/1.6v) running on an Iwill W02-R. Arctic Silver grease was used in all tests.

I’ll continue to test and report on both boards as long as the heatsink under test can be used for Socket 370.

The Global Win CAK38 tested very well and is an acceptable solution for either Socket A or 370 CPUs. No lightweight, so if weight is a concern, copper heatsinks are not your thing. However, it does not offer sustantially better performance than some aluminum units, such as Global Win’s own WBK38*. I suspect one reason for the CAK38 is to have a multi-platform Socket A/370 heatsink rather than separate models.

*Although this fits the Iwill, it may not fit other boards due to its extension beyond the socket.

People talk about noisy heatsink fans and what they did about them. — Ed