SUMMARY: Overclocked AMD CPUs throw off enough extra heat to defeat all but the best air-cooled heatsinks; the FOP32 is not one of the best.

There is a dilemma in the land of heatsinks:

Products are typically designed to four decimal places, then anywhere from 100% to 400% is added as a “safety factor”. This allows us to use something like a Global Win FOP32 on an Intel CPU and overclock it with some degree of safety – call it “overhead”.

Now, when you go from something like 12 watts to 20 watts, the “overhead” in the heatsink is usually enough to handle the extra load. Due to cost considerations, heatsinks will contain some “overhead” but not a lot (although I think the Alphas are an exception). With Intel CPUs, you don’t need a lot of “overhead”.

However, when you go from 24 to 50 watts, “overhead” disappears and the heatsink does not perform. If you look at heatsink efficiency curves, that are not linear but become asymptotic at some point – that is, the max out and no matter what you do to it, it’s not going to perform any better.

So if you take a heatsink with limited “overhead” and use it in a situation where, at “normal” or spec CPU usage, it is OK, and then double the heat load – well, you’re expecting too much.

This long-winded explanation, I think, begins to explain why so many heatsinks we have successfully used for Intel socket 370 cooling perform so miserably in AMD socket A situations. My latest case in point – the Global FOP32, kindly sent to me by NATA Computers.

As the picture below shows, the difference between the first Global Win FOP32 and the latest version, the FOP32E for socket A cooling, is minimal. The E version (“E” stands for “Extra Exertion”) is minimally larger, but its heritage is distinct. The clip is stiffer – designed to meet AMD’s heatsink pressure standard. In contrast to an earlier version, this clip is not as stiff and I was able to mount it, although I did have to use a pliers to do it. 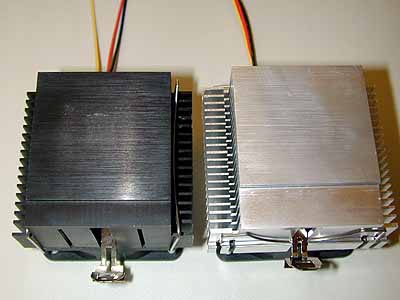 Note the “E” version (right) has a larger cutout for the socket A cam arm and is slightly larger than the earlier FOP32. 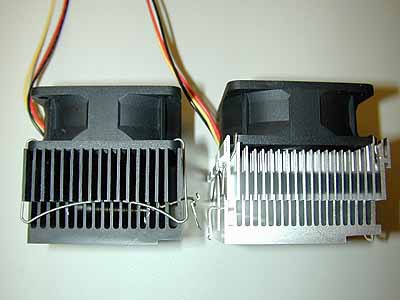 Here you can see the “E” (right) is slightly larger.
THE TEST

This is all too familiar territory. I know some of you are using heatsinks like the FOP32 and ORB with OK results (see below), but I have not had good results yet. I think the key issue is that until someone designs an air-cooled heatsink SPECIFICALLY for AMD’s toaster ovens, we are going to continue to see a trail of mangled CPUs and dangerous CPU temps.

Don’t expect an AMD certified heatsink to meet the cooling needs of an overclocked system.

The heat load generated by my AMD 650 running at 935, 1.85 volts, is about 50 watts. Pushing a 650 to these speeds requires more cooling than an AMD 935 (if such existed) because we are running these out of spec, so heat is more of an issue due to higher voltage used to attain stability.

Until we see a new generation of specifically engineered heatsinks for AMD’s socket A CPUs, most (Alpha one exception) air-cooled heatsinks will minimally cool overclocked CPUs, potentially limiting performance.

I will gladly feature any heatsink that lets me run my system air-cooled.

Thanks again to NATA Computers for sending the FOP32 to us to try out.

As soon as I posted this, I received the following email:

With the FOP-32 original on it, I am getting 46C at bootup and 49C
after 12 hours of tests. While I know the trusty PAL6035 cools much better ([email protected] stable for 12 hours at 42C at boot and 46C end of test), I believe the FOP is a good cooler for the price.

When I put together my Alpha PFH6035MFC for use on my PC100 Socket 370 to Slot 1 converter card, I had to take the assembled Alpha apart three times before I found the proper way to mount it. In the

Didn’t want to hack up any of my CPU coolers so I came up with this; they got me another 15 MHz on the old DDR 🙂 Email SurlyJoe