How-To make your own — Petar Lazarevski

I’ve used water to cool my video cards for quite a while now. The first one to be watercooled was my Diamond Viper 770 and it performed much better with the waterblock mounted instead of a small heatsink with no fan on it. Details about this can be found right HERE and HERE.

The waterblock that I have used was of a simple cross-drilled type, just like this one: 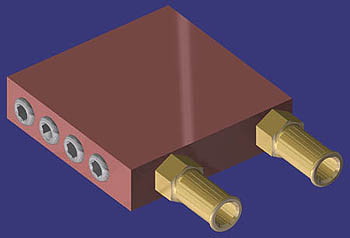 It has two main (collector) channels and four connecting channels of a smaller diameter. Just to let you have an idea how does it look inside, I have added this picture: 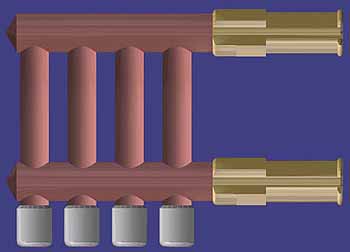 Nipples and Allen bolts that are used to plug the holes where the drill bit went through are clearly visible.

This kind of waterblock works perfectly well in case you have no memory heatsinks on your video card. If you want to make one yourself, the detailed drawings can be downloaded HERE (456K).

Enclosed in this archive you are going to find four folders, named Clip, Nipple, WB assembled and WB raw. Inside these folders are detailed draftings and cross-sectional views, all you need to make a complete setup. If you do everything following these drawings, you’ll have no trouble mounting it and your GPU is going to run a lot cooler than with any HSF you could buy.

Of course, you may have a video card with some components (like capacitors) that are going to make mounting impossible, so you first have to check if you have enough space for this waterblock.

However, if you have a video adapter with extremely fast memory, it is very likely that there are heatsinks glued onto the chips. A portion of the PCB with memory heatsinks is shown on the picture that follows (some components not shown for clarity reasons): 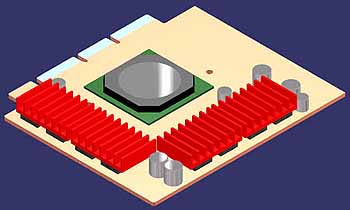 It is obvious that the heatsinks stay in the way of the nipples and that the simple waterblock could not be mounted. Since I have recently purchased a card that looks just like this, I thought of a way to make nipples “higher”.

Of course, I could use some bent copper tubes to make nipples, but I thought that it would be too much trouble, since the bending radius would be so small. So I used some leftover square brass bars to make four identical angle adapters, just like one on the picture below: 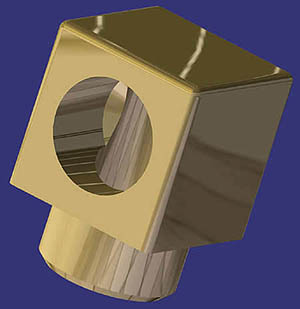 The appropriate nipple could be made of a hexagonal brass bar and should have a thread that fits into the adapter. It should look something like this: 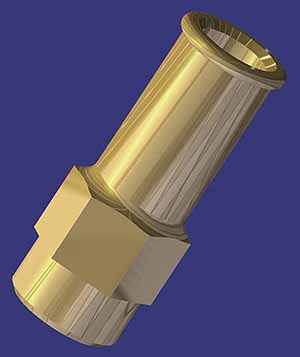 This is a very small nipple with M8 metric thick pitch threading and 5mm inner diameter hole in it. It is quite sufficient for the flow needed to cool down the GPU perfectly.

I used four copper washers between the adapters and the waterblock body, but if you have some good thread-sealing compound (like those made by Locktite or Wurth), you won’t need washers at all. All the parts needed to assemble this kind of “upgraded” GPU waterblock are shown on this exploded view: 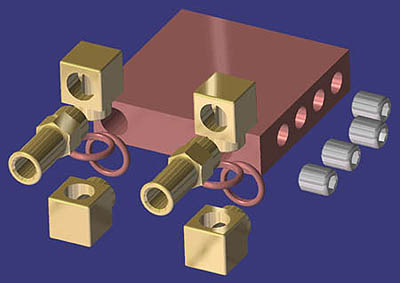 After the assembly, your new waterblock ready to take away the heat produced by GPU should look something like this: 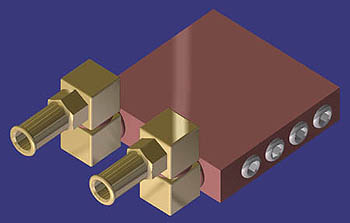 I always use two clips to mount the waterblock on the video adapter, the one that goes under the PCB: 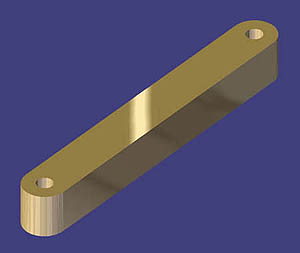 And the other that should be put over the waterblock and has a threaded hole for a tightening screw: 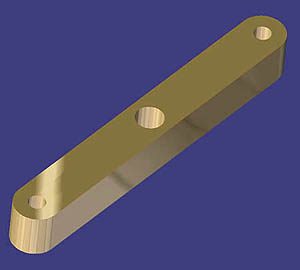 The reason for using two clips is simple: Taking the load of the PCB that would otherwise strain it and make it bend a little. When you put everything together and tighten the screw in the clip, your video card should look like this: 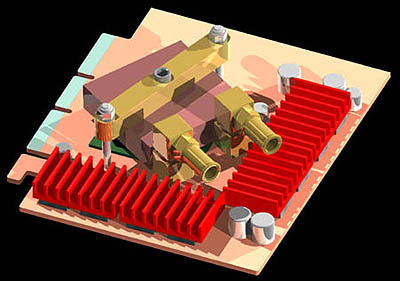 The whole setup is less than 30mm high, so you won’t loose your second PCI slot with this unit (your first PCI slot is lost anyway with the AGP video card in place)

Thin long bolts (usually with standard M3 threading) should be made of nylon or similar non-conductive material, but since I could not find any, I insulated the plain metal bolts with thin, self-adhesive tape in the portion that has contact with holes in the PCB.

Since I used brass bars to make clips, the one that goes under the PCB has to be well insulated. It is preferred to use some thick, elastically deformable material – I cut it out from an old mouse-pad. If there are some components in the area of the PCB where the clip is going to reside, it is advisable to shape the clip with a file to make it fit better and not to make excessive pressure on a few tiny electronic components, such as capacitors or resistors.

The next picture shows how the side of the PCB opposite to the GPU should look like after assembly: 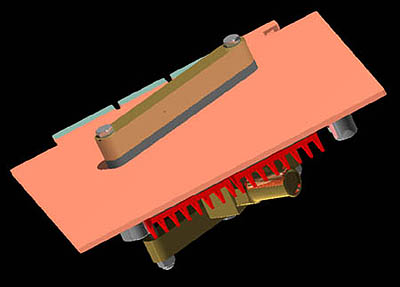 If you decide to make this kind of waterblock, download the detailed drawings HERE (531K). Enclosed in the archive you are going to find four folders: Adapter, Assembly, WB assembled and WB raw. Inside these four folders are detailed draftings and cross-sectional views, all you need to make a complete setup.

If you are looking for a waterblock with better flow characteristics and higher efficiency, maybe this could be a solution for you: 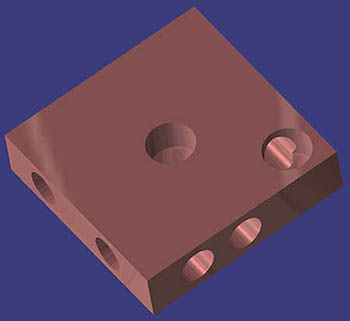 This is a 40x40x10mm copper waterblock, with channels drilled in a way to simulate a milled “labyrinth” type. An angle adapter is necessary here too, but it is larger than the previous one and it takes only two of them for the kit. It should look like the one on the picture that follows: 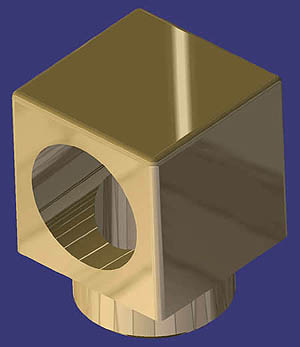 The nipples are made of brass and have larger inner diameter holes for lower water flow resistance. This is a typical nipple with thin pitch metric M10 thread and 7mm inner hole: 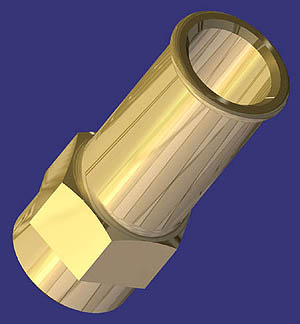 In case you wonder how does the water circulate inside this waterblock, the picture that follows should make everything clear: 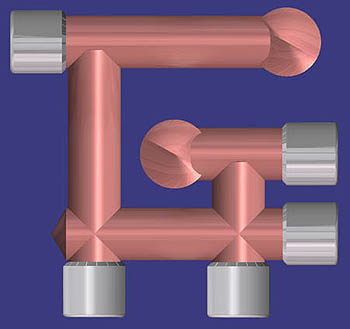 Cooled water enters in the middle, makes four 90 degrees turns in the horizontal plane and exits through the corner nipple.

All the parts needed to assemble this kind of GPU waterblock (which may also be used as an excellent northbridge cooling unit) are shown on the exploded view below: 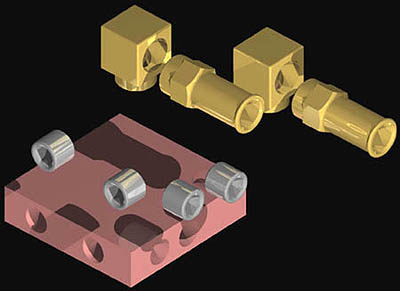 When you apply some sealant (which could be Teflon tape or previously mentioned Locktite or Wurh compound) and put all the parts together, the cooler should look like this: 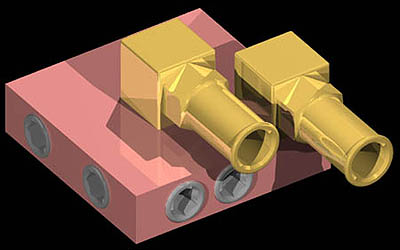 The mounting on the GPU is similar like in the previous example, except for the tightening bolt that abuts the angle adapter in this case. However, the whole setup is a lot higher this time and you must forget about using first two PCI slots. Here’s how it should look like: 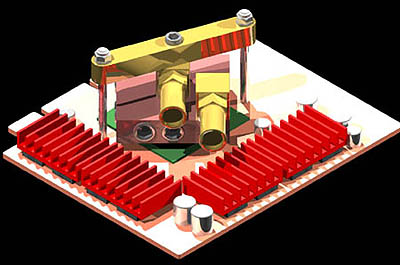 I think that this kind of waterblock is not necessary (you’ll be even more sure of this after you read the test results of the previous unit) unless you intend to use Peltier element.

If you want to make this kind of GPU watercooling setup anyway, you can download detailed drawings HERE (916K).

Is it worth the trouble?

It has been already said at the beginning of this article that watercooling has worked well and helped the overclockability of my previous video adapters. However, it was not the case with the last one that I have purchased. Now I use GainWard GF2 TI500 ViVo with 64MB 4ns memory.

It is a great performer and it overclocks to 290 MHz GPU frequency and 520 MHz memory frequency with absolute stability using the standard HSF supplied with the card. However, the rear of the PCB behind the GPU is so hot one could never hold a finger pressed against it. I expected that I would be able to boost the performance of the card with the GPU running at much lower temperatures.

However, it turned out to be an almost total disaster. The GPU went up to 330 Mhz, but it was unstable and the performance improvement was minimal. Since I noticed that the memory heatsinks were getting hot, a medium-sized fan was placed right next to the edge of the card to cool them down, but the memory would still get unstable over 523 MHz.

Three tests were made: Quake3 Timedemo 1 at 1600x1200x32 High Detail, Final Reality and 3DMark2001 at default setting. Only the differences between the maximally overclocked card with the original HSF (being 290 MHz for the GPU and 520 MHz for the memory) and with the watercooled version are going to be compared.

The system consists of:

The results are as follows (the memory setting is 520 MHz):

At GPU frequencies over 305 MHz, 3DMark2001 never finished, so I could not get a result. It is obvious that the performance improvement is minimal (about .6% in 3DMark2001 and 4.3% in Final Reality) between a maximally overclocked GPU with the original HSF and a watercooled one (290 vs. 305 MHz) running stable.

If you take only this into consideration, there is no reason to cool your high-performance GPU with water. Of course, it would do no harm and you would feel better knowing that the rear of your video adapter is not hot any more.

These are the results that I have obtained with my GainWard GF2 Ti500 card. It is quite possible that watercooling some other card with another type of GPU would give better results, so please don’t let this conclusion of mine discourage you from making your video adapter watercooled.


Micro Stutter: The dark secret of SLI and Crossfire

Most of you reading this will likely have some idea of what “micro stutter” is. If not, you may have experienced it.