Ed NOTE: I just received this email from Andy:

“I have been feeling a little guilty about causing so many people out there
to have nightmares, depression and sickness from my little joke. The
reaction of people word wide has blown me away. I never intended for such a
thing to happen.

My in box went from 1% to 100% in 2 days (1300 messages). So many people
were pointing out what a stupid thing to do, so many people were telling me
of feeling sick, some even said they cried. I felt bad for those people. It
was amusing to read things like “I should be hung by my testicles and lit on
fire” or the constant reference to “Taking a Porsche and replacing the engine
with a KIAs”. Most people cried out in horror and carefully pointed out the
error of doing such a silly thing.

I am sure you are wondering why this all took place.

Are the pictures real? Yes.
Is it my own G5 case that has been cut and hacked? Yes.
Did I give away two G5 2GHz processors (IBM PC 970)? No!
So what happened?

I got a free G5 shell from a buddy of mine and pulled a prank on a Mac
loving friend. He got so upset. I wrote up a little story, my imagination
and warped sense of humor kicked in. I sent it to OC.com just to see the
reaction. I honestly didn’t think it was going to be posted. I cannot
believe how fast or how far it has spread on the internet. There are an
amazing number of people who are emotionally attached to inanimate objects
such as computers. Mac fans seem to be much worse that I ever expected. The G5 is amazing, I would never dream of really doing that 😉

ED NOTE: I posted this because I thought this was about the craziest thing I had ever seen; well, it turns out it was a little too crazy.

What fascinates me is the overwhelming reaction among the Apple community. I have read about the zeal among Mac users, but the reaction to this story is a real eye-opener. I hope Andy’s confession soothes those who felt so strongly about gutting a perfectly good G5.

I got a shiny new Apple G5 for Christmas. I loved the case, but I’m no Mac user. So I…. 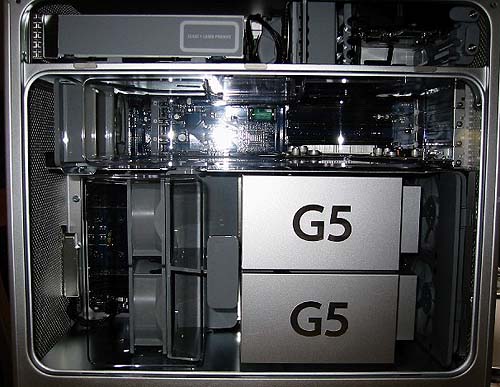 Don’t get me wrong, I’m sure G5 is a great computer, but I wanted a Dell for Christmas. I don’t have any programs for Apple and didn’t feel like waiting for them. I thought about selling it, but my parents would be upset with me. After all, this was a very expensive gift and it meant a lot to them to give to me.

First I removed the fans, ductwork and the board. I had to disassemble part of the case – it’s held together with star head screws. I have NEVER seen a finer made case. 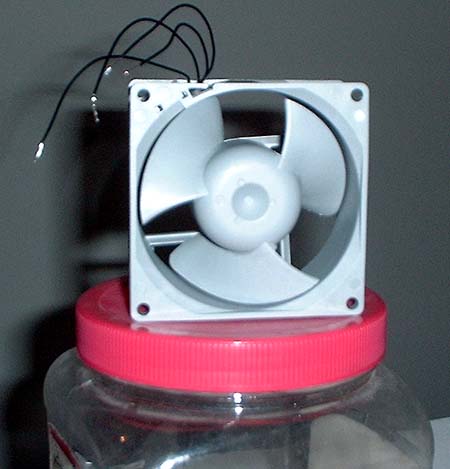 Before installing the board, I had to cut out a section of the case for the ATX panel: 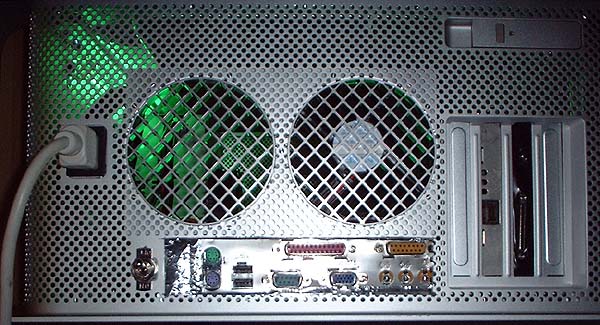 The temporary switch was installed for the reset button.

Here is what it looks like after the board was installed. I had to snap the stands for the Apple board off, then I used old plastic stand offs from my collection of parts. I had to glue in spacers so they would be the right height.

Its too bad Apple decided to mount the board on the opposite side, because you can only fit a Micro ATX board due to the location of the slots. I considered cutting out the entire back and doing a total swap with my old Dell PC, but I think it would have ruined the over all look to the case. 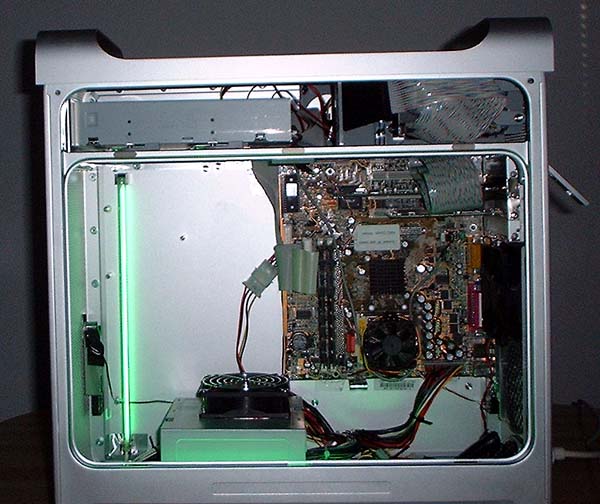 The power supply had to be removed; it was hidden away under the lower panel. I installed in an ATX supply with Velcro: 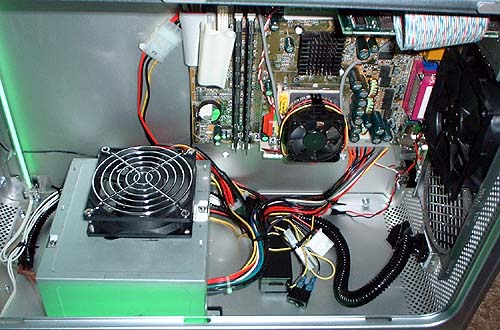 When I showed my friend, who happens to love Apple, he looked sick. He did not say anything to me. He just put his hands on his head and was in shock. I wish I had a picture of that.

It emits a green glow from the front… 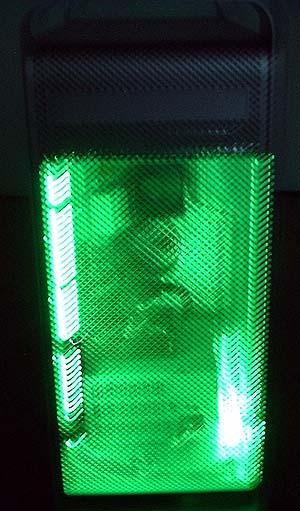 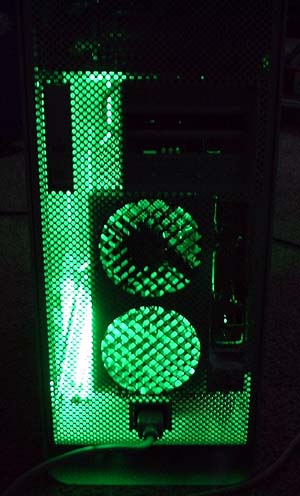 It’s a good thing my parents don’t know anything about computers, because I’m sure they would be really angry if they knew what I did. I have to say that I’m happy – I can keep on using XP.

The board is a Biostar Micro ATX, with a 2200 Athlon XP with an Adaptec 29160 SCSI controller and two 36 GB Atlas 10K V hard drives. I am stuck using the onboard video because there is no AGP slot. I had no money for a SATA controller and quite honestly, I swear by SCSI (the G5 comes with SATA drives).

In the future, I want to get an Athlon 64 board and CPU with AGP support for a decent video card.

I use it mostly for Internet, ripping music/DVDs and pissing off my friend.

I put all the parts from the G5 into a box and gave it to my friend. He was rather happy. I think he is going to try to install them into his G3 – I hope he’s successful.

I’ve Lost The Will To Speed

Do you still have fire in the belly, or are you burned out? How do you relate to ttfk’s experience? We’re going into our eighth year and have seen a LOT of changes – how about you? Spend a couple

What is Dr. King’s legacy? You can boil it down to one sentence: “Hey, my people are people, too.” So simple, yet so hard to understand and do. Not just for blacks. If you look at so many movements, past,