Microsoft has not offered this as an option to us, but with a few easy steps we will outline below how we can make Windows 8 look like the way most people want it to look like.

Windows 8.1 is coming and it will have a Start Button. Except it’s not a Start Button! It is a Metro Button to sling you right back into the Windows 8 tile-based user interface! One can only imagine the frustration of average users finally managing to get away from the tile-based environment, finally seeing the familiarity of Desktop… only to click on the Windows 8.1 Start Button out of habit, and find out the hard way that it has been placed there to catapult them right back into the Metro interface they tried to escape from.

Although many tech-savvy users actually like Windows 8 interface, it is difficult to ignore the sheer number of average users who describe Windows 8 as “confusing” (or worse).

Microsoft’s Chief Marketing and Financial Officer Tami Reller recently referred to Windows 8.1 as “an opportunity for us to respond to the customer feedback that we’ve been closely listening to.” Yet Windows 8.1 preview shows us that Microsoft has again made a choice to not give customers something they’ve been asking for since Windows 8 was in its testing phase: an option, just an option, to boot into Desktop with a real Start Button and a real Start Menu, while also keeping the option to activate the tile-based Windows 8 user interface with a single click.

Analysts have been using the phrase “…if Windows 8.1 is received poorly by consumers…” as if the reception can be expected to be different, given what happened after Windows 8 launch when customers started to return their purchases to exchange Windows 8 machines for Windows 7 machines, just to get their Start Button and Start Menu back. Businesses today do not hesitate to take advantage of ‘downgrading’ their Windows 8 licenses to actually install older Windows 7 so they will be able to avoid Windows 8 interface and boot into the Desktop environment which they find more conducive for business.

Before choosing to ‘downgrade’ to Windows 7, consider this: You can easily and quickly have a Windows 7-looking Windows 8 – without giving up any of the features of Windows 8 – which you can activate with a single click, or choose never to use if you dislike them. And you can do this for free.

Classic Shell freeware gives average users everything they dreamed Windows 8 would be. It is so popular that impostors have set up web sites, infringed on the trademark of this freeware, violated their copyrighted skins and started selling this free software for $20!

Classic Shell is older and more customizable than other pay-for solutions which mushroomed to meet the demand for Start Button – Start Menu – Desktop based Windows 8.

You can turn Windows 8 into an operating system that boots into Desktop complete with a real Start Button and a real Start Menu. As a bonus, by simply holding SHIFT when you click on the Start Menu button, you can return to Windows 8 Metro user interface, which you never have to do, and thus never see the original Windows 8 interface if it bothers you.

When you power on your computer, if all you wish to do is boot into Desktop with a real Start Button and a real Start Menu, simply select for Custom Setup and have Classic Start Menu installed: 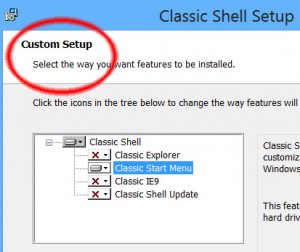 If you wish to disable Charms, simply do this in Classic Shell options: Windows 8 Settings TAB > Disable active corners > All > OK 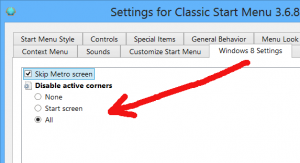 What is Charms? In Windows 8, you will see multiple icons pop up when your mouse cursor accidentally hovers across the right corner of your screen, or if you accidentally swipe the touch pad of your laptop. Windows Charms is liked by some tech-savvy users because it gives Windows 8 a “clean” look. It is strongly disliked by Average Joe for functionality reasons – various functions are only exposed by pointing at invisible hotspots. Charms would tend to appear out of nowhere while Joe is frantically working to meet a work deadline.  Joe would suddenly see Windows 8 popping up icons on his screen, preventing him from seeing the work he is trying to complete. Because he accidentally hovered his mouse cursor over the part of the screen that Windows 8 has appropriated for the Charms Bar, Joe is greeted with a launch pad he never asked for.

Charms is also a good example of how difficult it can be to justify the advantages of the new Windows 8 Graphical User Interface. Proponents struggle to answer the following question: What if you have to Reboot/Shut Down a Windows 8 machine? Do you hover your mouse *carefully* in the corner, hoping to Fish-In the “Charms” pop-up, only to have to carefully scroll down to Settings thereafter, making sure that Charms doesn’t disappear? Doesn’t it take a bit of time after that for your eye to locate the Power button to only then bring up the menu to be able to perform the Reboot/Shut Down process? Why is that better than having a Start Menu button from which you can accomplish this particular example with two clicks, as Classic Shell freeware once again allows us to do? 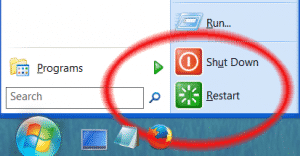 The Problem With Windows 8, and The Classic Shell Solution

Upon first installing Windows 8, some experienced business users got a tingly feeling of anger in their stomachs over how sadistic Chief Microsoft Developers must have been to approve a Windows 8 GUI project which makes users literally jump through Circus Hoops of Windows 8 Charms option screens every single time they simply try to Shut Down or Reboot their machines.

Given a choice today, most, if not all of us would find that if we asked average people what they would want, more than 50% of average users would choose to boot into Desktop, not boot into Windows 8 GUI a.k.a. Metro. By definition, therefore, the majority of people would choose to boot into Desktop with a real Start Button and a real Start Menu. They would like Metro to be something they can launch or even something that can be set up as a default option, but not something that should be the one and only default option.

Luckily, Classic Shell freeware allows us to remove that most common complaint against Windows 8, which lies at the heart of the slower-than-expected Windows 8 uptake.

The following buttons have been posted on the Classic Shell forum:
http://www.classicshell.net/forum/viewforum.php?f=18

Wow, nice, this could've been part of my paper on Windows 8 lol

I have to admit with all of the griping ive done, ClassicShell does, in practice, eliminate many of the concerns. Yet the philosophy behind it is what angers me the most, things like SkyDrive (and the Cloud in general) and having apps on a fully featured desktop system where they really aren't necessary (as apps are generally gutted programs so they can run on less powerful hardware)

Nice buttons too, what is the green Windows 7 start button from? Someone made that? It looks like it would be on Home Premium or something lol.

Because Classic Shell essentially gives you the Windows 7 experience, that means you have the option of never seeing any of the things you outlined that bother you - there is no reason not to go with Windows 8 + Classic Shell. I wouldn't jump to upgrade a working Windows 7 system but given an equal choice on a new install, everything you'll see from the moment you boot in until shut down will be the same as on Windows 7... with the added option, just an option, to access everything you dislike with a single click.

Yeah the fifth one from the left, never had an HTPC, the more you know =P

But yeah, I completely agree with your point about how 8.1 isn't bringing back the start menu, but the button, Microsoft is trying to appear as if it did indeed capitulate to consumer pressures the same way it did with Xbox One DRM, and like the DRM, it is an illusion, for the new start button takes you to the Metro screen...

Although many tech-savvy users actually like Windows 8 interface, it is difficult to ignore the sheer number of average users who describe Windows 8 as “confusing” (or worse).

Who? Few tech savvy users like Windows 8, lol, it slows down productivity, heavily.

Because Classic Shell essentially gives you the Windows 7 experience, that means you have the option of never seeing any of the things you outlined that bother you - there is no reason not to go with Windows 8 + Classic Shell. I wouldn't jump to upgrade a working Windows 7 system but given an equal choice on a new install, everything you'll see from the moment you boot in until shut down will be the same as on Windows 7... with the added option, just an option, to access everything you dislike with a single click.

Honestly if Microsoft left the Start Menu from the beginning on the desktop, with a link to the new screen (called it something else though) I wouldn't have had nearly as much as a problem with it, but the fact they removed something so central and so utilized as the start menu just shows that they care less about usability and customer feedback and usage data, (most use the Start Menu...) and just want to jam it down our throats.

EDIT: Got to hand it to HP though, they actually listen to customer complaints (probably because they realize they're losing money based on something another company does...)

they made their own start menu replacement

I just signed up and a newbie to this forum. But what a great pleasure to install something and have it work just like that!!!:attn: This step was so easy and show my Uncle and now he can have the look and feel of Windows 7 back. Thanks for the post

Yes, welcome to the forums.

It's been a year since Windows 8 was officially released to manufacturing, and I can't tell you how many people I've seen here and elsewhere, refusing to spend 30 seconds to resolve this problem like you did and instead choosing to go back to Windows 7, for no other reason than just to get their Windows 7 Start Button / Start Menu back, which they could have gotten on their Windows 8 quickly and for free.

Microsoft is notorious for forcing difficult user interfaces on its customers...RE: Office 2007 where they hid most of the usable controls on tabs in the ribbon. I have been using 2007 at work for about 10 years and still cuss at M$ every time I use Office for the trouble that I have finding hidden buttons.

I bought a Win 8 media computer for my home theater and have determined that the only good thing about win 8 is the fast boot time. But...argh!!!, it is not really a fast boot, but restoration from sleep. Funny, I can do that in XP and Win 7.

M$ obviously does not employ any human factors engineers. If my employer created a stupid interface like that, we would go out of business in days. :bang head

I agree. Since we have no alternative, the only thing we can do is try to modify it to look the way most ordinary folks want it to look like.

To address your Office 2007 problem, I tried to modify the new Ribbon system as well, it was not as easy as resolving the Windows 8 problem, but I got my custom Excel/Word setup in there and am using it today even on my MS Office 2013.

They accuse us of resisting change, but if we manage to get most often used custom Excel icons set up right in front of us, instead of Ribbons, we can get business done a lot faster than using non-customizable multiple Ribbons. So the reasons are practical, not emotional.