Intel recently held a marketing conference for its technology motherboard partners in its super secret advanced development facility called Lab 51 in Nevada. We were fortunate to have one of our friends at this conference who was able to provide us with some slides used that reveal a Intel’s new technology thrust which looks to increasing CPU cores well beyond what we expected.

As the following slide shows, Intel has developed a “Multi-core Enhanced Layer System” which envisions stacking 4 core CPUs onto each other, creating CPUs with 4, 8, 12 and 16 cores: 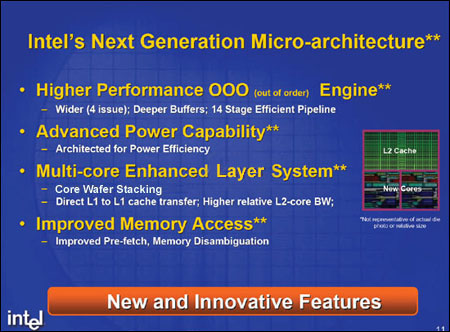 This approach is the brainchild of the Lab’s director, Dr. Sandra Gupta-Greenberg, who holds advanced degrees in Computer Software, Micro-circuits, Electrical Engineering and Astrology from the University of Caluctta and MTI; she was recruited from Lego, her last employer.

As Dr. Gupta-Greenberg explained, Intel sees “Parallelism” as the basis of its new architecture: 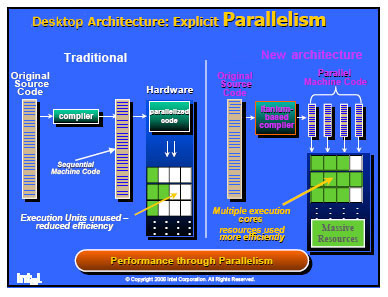 Key to enabling this technology is a new approach to stacking CPU cores. The basic module is the quad-core package which has connectors to allow core stacking, thereby making 4, 8, 12 and 16+ cores CPUs in one package.

In addition to core stacking, Lab 51 has prototyped a new gamma beam technology which uses super conducting technology to split the beam into parts, allowing line widths of 1.78 nanometers. This, coupled with advanced epitaxial-diffusion, results in a compact package measuring 15 x 18 mm. The only drawback to this process is that the cores become radioactive, although Intel will use a lead IHS.

This allows the quad-core package to drastically reduce power requirements so that each core will consume only 23.2 watts at full power, with a 16 core stack consuming only 92.8 watts. As Dr. Gupta-Greenberg explained, the confluence of new technologies has effectively combined at the right time to energize this strategy. In addition, with Saturn rising and Jupiter descending in the house of Taurus, she feels the stars clearly favor Intel.

Intel has named the multi-core desktop CPUs Amado and Madison, with Daman the mobile CPU. Amado has 12 cores, Madison 8 and Daman 8 also: 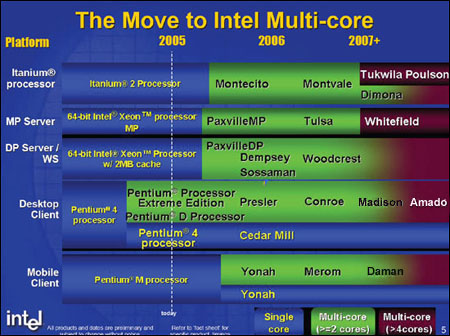 When queried about this approach, Dr. Gupta-Greenberg credited her years with Lego as planting the core stacking concept. She also stated that theoretically there’s no reason that a 64 core CPU could be built, as long as power requirements can be met. Intel plans to launch Madison on May 12, 2007, at 11:07 PM, as the astral alignment favors this date.

While obviously not covered at this conference, our sources at AMD confirmed that they are pinning their next generation CPUs on an organic technology which enables their CPUs to breed multiple cores as needed over time, a very exciting concept.

With 2007 rapidly fading, here’s some forward looking articles that may be of interest: IT People, Places, Things to Hear More or Less About in ’08 In 2007, AMD was plagued by rising debt, shrinking market share, and mounting financial Read More

The purpose of this poll is simple. It asks what you think of the two major video card makers, and how much that opinion affects your buying decisions. Please complete the survey and email it to the link (and only) Read More

Got this email (edited for conciseness): Sorry to be bothering you, but I’ve been searching the net for awhile about getting a video card. It turns out the HP Pavillion 514n has no AGP slot. I play assorted computer games Read More