SUMMARY: DDR is coming and there are real performance improvements – Iwill is first out of the blocks with the KA266-R. 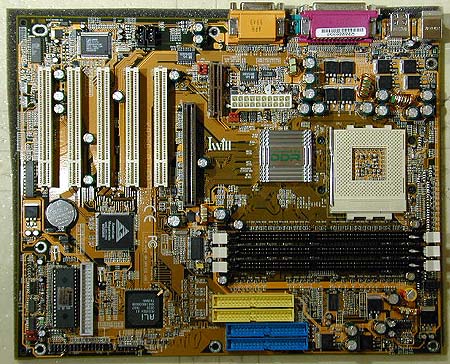 PC Nut just got back from COMDEX with the Iwill KA266-R DDR motherboard in tow – no DDR RAM. I have DDR RAM (Crucial Engineering Sample). So we got together to run this board through its paces. Rather than wind-up with the benchmarks we ran this morning, let’s see what this board can do:

Note SiSandra’s Memory scores – damn impressive! This is the one area we will see major gains over the next year or so. Good news for bandwidth intensive games like Quake.

NOTE: These are not “head to head” tests – comparisons are indicative only.

Rob over at PC Nut will be running more benches over the weekend. We didn’t try pushing the CPU beyond 956 MHz due to the lack of V Core settings – the CPU will do in excess of 1100 MHz at 1.85 volts. Looks like Rob will do the pencil thing on the L7 bridges to bump the voltage up.

One thing I found was that, at the speeds we ran, there were no hotspots on the board; the power transistors were barely warm to the touch – same for all other chips. Even the Northbridge heatsink was barely warm. I would still put an active cooler on it except that it is glued on – no mounting holes for something like a Lasagna chip cooler.

There is one item that is very important: The CPU fan header was not able to spin the Delta 38 cfm fan to full speed. This may be an anomaly with this board, but use caution with high wattage fans on these headers.

Overall, the board was very stable – we did not run exhaustive tests, but it handled everything we threw at it. We did find that it would not power off two times, although this is more likely a Windows problem. More benchmarks and endurance testing to come. 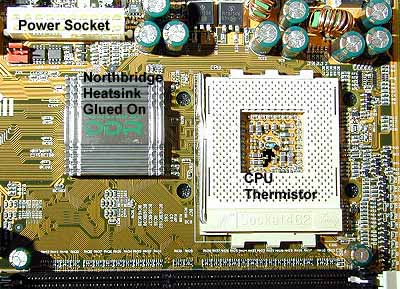 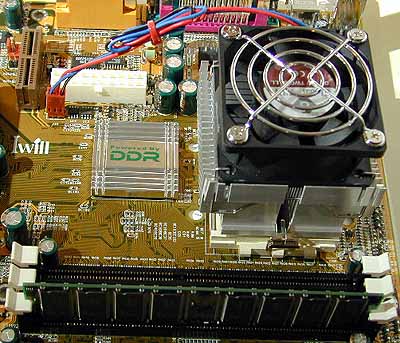 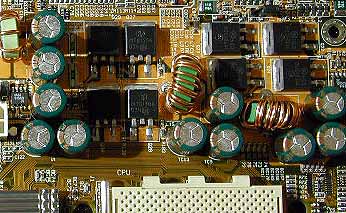 Looks like there are 8 power transistors – if so, speaks a lot to the stability we had with the board.

Many, many thanks to Humphrey and Rob at PC Nut for interrupting their busy workday to run these tests with me.

Unfortunately, there are no less than five similiar sounding names for MSI socket A motherboards. Some have overclocking features, and some don’t. The K7T Pro (aka MS-6330) does not have multiplier controls. You don’t want this. The K7M Master (aka