Jim sent in his experience with the cc0s:

“I read your update on the cC0’s. Here are my results of 4 different cC0 chips:

It cooled to about 10C/50F when running the peltier and fan separately from the motherboard’s power supply, but not lower. At 1.85 volts, the CPU is radiating about 36-37 watts at these speeds, not terrible to cool but you need more horsepower to get it appreciably lower.

All told, the PIII 700E is a good price/performance upgrade to hit One GHz if your RAM and peripherals are up to the challenge of FSBs over 133 MHz. This is one area where AMD’s Socket A CPUs currently have a clear edge over Intel: Multiplier overclocking is much preferred. How long this lasts – no word yet.

I used water cooling on the system outlined below and found it stable with Prime95. I could make it to the Windows splash screen at 1085 MHz but then it would freeze. Prime 95 temp: 27C/81F at an ambient temp of 20.4C/69F. Peltier cooling next – stay tuned.

Breaking 1 GHz only a short time ago was a major accomplishment; now it’s more like “What else is new?” Incredible how far and how fast we’ve come from the Celeron 266 days.

The choice facing those of us who want to upgrade to 1 GHz is AMD or Intel? If you have an Intel platform, the question is which CPU gives you a reasonable chance of hitting one gig without busting your wallet. I think the new stepping cc0 PIII 700E is that chip. We’re hearing a lot of good things about it and PC Nut was kind enough to send one our way to play with. I have to say it’s a honey. 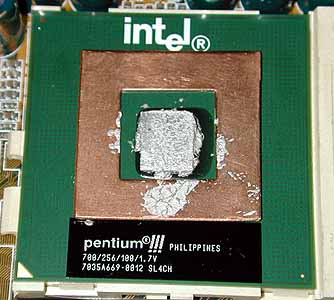 SL4CH 7035A669 – Philippines; note the use of a copper spacer. *I had to move the clip over one row to get the Alpha PAL6035 to fit – even then it’s real tight due to capacitors around the socket.

Even though I could run all benches, Prime 95 failed after about 15 minutes at 1050 MHz.

What’s impressive are the temps under Prime95: Not more than 34C/93F with an ambient of 20C/68F. This CPU is generating a mere 33 watts at these settings; a Duron at the same settings would be blasting out about 51 watts. It also suggest that more aggressive cooling (e.g, peltier) will yield some nice gains. We’ll try that shortly.

In sum, I think this is a perfect upgrade CPU for folks who want to stay with their Intel boards and want a good shot at 1 GHz. For about the same price, you could get a Duron 800 and an ABIT KT7 (no raid), but not the same performance. We’ll be doing some comparisons shortly.

Many thanks to PC Nut for allowing us to play with this one. And thanks to Intel for a nice stepping revision.

Disclaimer: No representation is made or intended to express an opinion as to who legally, morally, Biblically, or anything-elsely deserves or is entitled to any land discussed here. The Register reports that Intel’s Fab 18, which is the one responsible

It’s worth reading Intel’s Core 5 Analyzed and Tested article from Maximum PC to scope out what’s coming down the CPU pike.