Physically, the board looks almost identical to the KK266 – some components have been moved a bit, but basically it looks the same except for the ATX power plug: 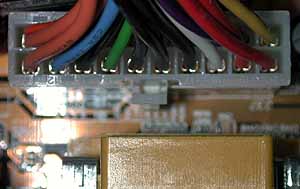 Now it is by the sound plugs (upper middle of the left hand side) and as such, snakes by the CPU. Iwill says they relocated it to make the traces shorter. The only thing I don’t like is that the release clip is cramped by the sound socket – since I change mobos all the time in testing, this is an inconvenience.

Iwill reworked the power circuit as part of this change. As a result, I noticed that actual voltages are about 0.1 volt higher than the BIOS setting:

This is Motherboard Monitor with Vcore set at 1.85 in BIOS. I don’t know if it’s an unintended result, this particular board or power supply, but it consistently reads about 0.1 higher. Please email me if you find the same thing.

UPDATE: Readers emailed me to confirm that their Iwills show the same hihger readings – mine hits 1.98 volts.

One upgrade is the on-board sound – now it is 5 channel compared to 4 and fully digital capable. For those of you who are not real sound buffs, this upgrade will do you fine, save you some money and a PCI slot. If you’re really into sound, NO on-board sound will do.

Another new feature of the KK266+ is the active cooler on the Northbridge chip:

One of the problems is that Iwill does not use thermal grease on it – all too common among motherboard manufacturers. I removed it and replaced it with a Lasagna cooler anyway (the Iwill is OK, but not Lasagna class). If you get this board without an active cooler, Iwill will sell you one for $6 (email Iwill); if you want to buy one for your KK266, they’ll sell it to you also.

At first, I thought Iwill’s BIOS has some bugs in it; after some checking, it turns out that this is an AMD issue. I found the following:

In the first situation, I confirmed with my Ultra X diagnostic card that BIOS fails to initialize at this setting – total freeze. This condition is present an ALL motherboards. These are not show stoppers, as other settings are workarounds; AMD is fixing these issues.

I’ve been using the KK266+ for heatsink tests for the last week or so, so the board looks OK running CPUs at 100 watts full tilt for hours on end. I would, however, make sure that there is good airflow around the voltage regulators – they do get hot.

I ran the KK266+ at 8.5 x 169 FSB for 24 hours using the UXD burn-in program; this exercises EVERY function on the board – CMOS, PCI slots, serial and parallel ports, low RAM, extended RAM etc. I ran this with 256 MB Crucial CAS2 and a Leadtek GeForce2 Pro without a hiccup.

The basic message here is that you’re better off going for the most stable FSBs with the most aggressive memory settings. The KK266+ does a little better than the KK266 (See this RAM Test) at the highest FSB, but basically about the same. What follows is a composite screen shot for Si Sandra at 152 FSB:

Many of you have seen reviews comparing AMD vs PIV, so these results should not be a surprise.

If you’re thinking about building an AMD system and want SDRAM rather than DDR, this is a great way to go.

SUMMARY: KT133A boards make FSB overclocking a real option; Iwill’s KK266 outperforms ABIT’s KT7A by a significant margin at reasonable SDRAM voltages. PC Nut was kind enough to send me a KT7A with RAID to test out, complete with a