By strict definition, what I write could be called a review. I like to refer to it an article providing information you usually don’t find in a review.

It’s no secret there are some performance concerns with the SIS735 chipset in asynchronous mode. That is CPU at one FSB and memory at another. There also seems to be some concern about KT266A and NForce bugs. I’ve worked with several DDR boards and they all seem to have a problem with memory, including the size and the placement in DIMM slots.

When Fedex delivered my board, I resisted the temptation to hook it up and read the manual as I always do. There had been some complaints about registry errors with Win 98se. When rebooting, instead of the error being fixed, you would just have to reboot again on into infinity. This is exactly what my board did.

There was the opinion at the OCworkbench forum that getting the fast shutdown patch from Microsoft cured the problem. This didn’t sound right to me because I have the same drive in my K7s5a 735 board and no problems. Rather than go through all the crap at Microsoft, I did the simple registry hack, changing the value in fast shutdown from 1 to 0. You can also run msconfig, click advanced, and check disable fast shutdown. I still had the problem although it was intermittent.

Just to make sure, I loaded Win 98se on a 5400 rpm Western Digital drive. With the software supplied, you can change it from ATA100 to ATA66 or 33. I still had the problem, but I did prove to myself fast shutdown was not the cause.

I was using a Crucial PC2100 256Mb double sided stick of DDR memory. The CPU was an unlocked 1 GHz Duron Morgan and default was 100/133 FSB. I changed the multiplier to 8X and 124/124 synchronous FSB. Guess what? The problem went away.

I might also mention the b011126 Bios cured some, but not all, of the problems. Even stranger, with a 128 Mb stick in the first slot, changing from CAS 2.5 to CAS 2.0 cured some problems. I haven’t tried all combinations and if you think about it, there are a lot.

This is a good time to point out the conflicting opinions you can find in a forum about a Mobo. As random chance would have it, if you hit the right combination – no problem. You’re wondering why someone is complaining their board is a POS when yours is running just great. If you hit the wrong combination, you’re the one doing the ranting.

I am fortunate to be an independent author. I am free to write the dictates of my conscience without fear of Mobo Makers not sending me boards to test anymore because I exposed a problem. If you have this board and having problems, there is nothing more I can tell you.

On the positive side, with a Leadtek GF3 TI200 I get some very good numbers and being able to boost the AGP voltage does aid in overclocking the card.

I’m going to put the box in a corner somewhere for several weeks and see if there is a fix or new BIOS. At that time, I’ll probably do an update. In the meantime, I have another project I want to work on (play with).
{mospagebreak}

ED Note: I asked John for more details on the PCI Dividers and he kindly sent this in:

Here’s the way it works: There are three groups of FSB
combinations with PCI dividers:

You have to pick a combination for base FSB and use the software
(Speed Gear) to go higher 1 Mhz increments – it only works with Win 95, 98 and ME. 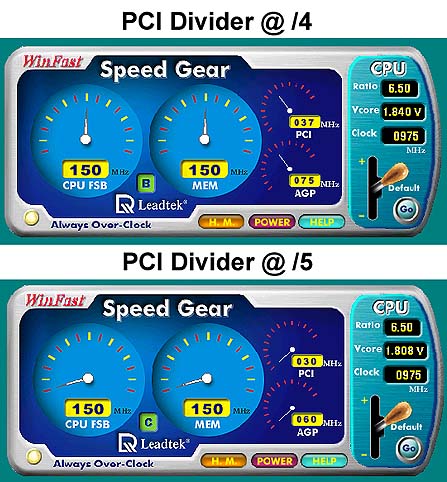 Note the AGP speeds – a LOT kinder to video cards.

A look at the spec sheet for the PLL, an ICS type 9248df-199 (same as the one in my ECS K7s5a) reveals some interesting FSB combinations at 150 MHz and above:

Microstar International – MSI has always produced some fine motherboards. They have not been thought of as “high end” or “overclockers” types of boards…. Until now! Thanks to Atacom I had the privilege of testing the MSI 6163 Pro Motherboard.