I recently built a 1.4Ghz Athlon XP based system that I intended to overclock substantially. I purchased a Golden Gate (all copper) with a 26CFM fan. I hoped that this would provide sufficient cooling but still be relatively quiet.

When I started it up the first time, to my disappointment, it sounded like somebody was mowing their lawn in there. Not good! I tried to cover up the sound by placing the computer under the desk, to no avail. So I decided to install a simple potentiometer (also called a variable resistor or rheostat) to limit the speed (and therefore noise) of the CPU fan. It is a simple project and I am extremely pleased at the results. Here is how I did it…

First I needed to calculate what value potentiometer I need to purchase, so I used Ohm’s law which states:

I knew that the fan was running at 12v and drawing about 300 milliamps, so by plugging the numbers in (12 / .3) I got 40 ohms. That is the current resistance the fan is experiencing. This now gives us a base to start with. Referring back to Ohm’s law, you can see that doubling the resistance halves the current (and therefore speed) of the fan.

I went out to my local electronics store and bought the 50 ohm linear taper potentiometer as well as a knob (to make it look more professional.)

IMPORTANT: You must purchase one rated at 3 Watts minimum.

Five watts is the best bet, to be safe. Any less and you will fry it, causing it to stop conducting current and thereby stopping your CPU fan entirely. Any potentiometer that is in the 30-70 ohm range would work well too. Don’t go higher than 100 ohms though, because that won’t provide accurate control and it would be very easy to cut off all power, causing your fan to stop. 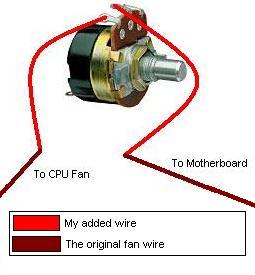 Note: It doesn’t matter if you choose reverse the connection, because
this isn’t a diode so it doesn’t care which direction the current is flowing. 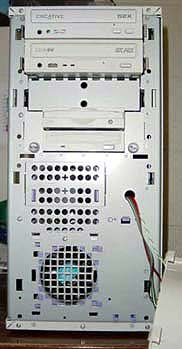 Now that the potentiometer has been connected, it needs a nice mounting spot. I chose to mount mine in an easily accessible spot, on the front of the case directly below the power button.

First I removed the front panel to expose the sheet metal up front. Then I drilled a 5/16″ mounting hole (specified on the potentiometer packaging) into the sheet metal, making sure I wasn’t going to hit anything inside the case!

Test everything out and make sure that it works properly. I installed Motherboard Monitor and set the fan alarm to go off at 1500RPM (in case something fails, I don’t want to have a fried processor!) 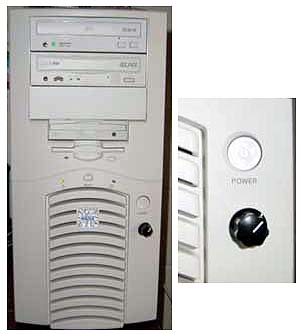 The noise difference is incredible! There is no more high-pitched noise and it’s probably only half as loud. Interestingly enough, I only noticed a slight increase in temperature. Before the modification the CPU was hovering around 38*C idle, now it’s usually around 42*C. Not too bad…definitely a worthwhile trade in my book, and all for under $10.

If you have any questions, feel free to email me.

This will be a very short questionaire: 1) Are you willing to buy a TBred2/Barton (presume for this that the chips can generally overclock to a “real” 2.3-2.4GHz with high end air)? 2) What is the most you’ll pay for

Competent people handle problems; smart people prevent them. When we look at an area like Internet pricing errors, we need to look at the likely causes of them. If you figure out causes, you can figure out preventions. Now if

They ran the first DARPA race yesterday. Not surprisingly, given the freakophile nature of the press, most media treated this as a real-life version of Wacky Races. For instance, here (free reg required), here, and here. They don’t get it,