A perennial favorite gets a face lift (and more) – Brian Berryman

SUMMARY: A perennial favorite gets a face lift (and more) 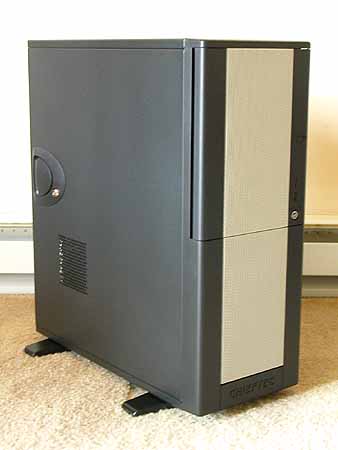 I recently opened some discussion with Chieftec regarding a case mod I had performed on their
full-tower server chassis.

While they weren’t interested in my idea (“Who needs front access USB on a server?” they said), they did suggest I contact Newegg, and have a look at
their new
“BX” Series Mid-tower Case.

This case shares a lot in common with it’s older relatives, but includes a number of new features as well. It’s a blend of old and new that should be a winner right
out of the box.

Let’s take my usual visual tour around the “BX”, and I’ll point out the new features along the way. Off we go!

As can be seen in the opening shot, the front bezel received a complete redesign. The two center panels are a metal mesh, that clip onto the door and front bezel.
These are removable, and interchangeable, so that you can easily change color schemes if desired. More on this shortly.

Also visible, is the blowhole in the side panel, which was redesigned. Instead of a round hole, it now gets a honeycomb type grill built into the panel.

A closer look at that blowhole. The panel latch/lock mechanism is unchanged from the previous versions. 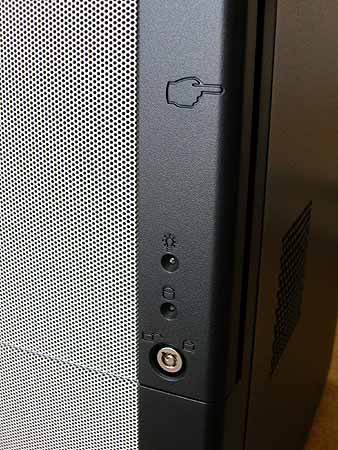 If you’ve owned a Chieftec, you’ve probably had someone try to open the front door from the wrong side at one point of another. They’ve added a small hand embossed
into the plastic, pointing to which side opens. Hopefully, this will keep a few doors from snapping off as people attempt to open them from the left.

Visible above is a closer look at the mesh the front center panels received.

Opening the door, we find new drive bay covers. These now have a pair of finger holes in them, making removal very easy. A slight tug, and they pop free.

The power switches, LEDs, and front door lock are all carried over intact from the previous design.

Looking at the inside of the front door, we can see that it’s well ventilated. Hard to see in the picture, but present, is a removable filter. This is part of why the
front center panels are removable…access to this filter. At the four corners can be seen the tabs needed to be worked with to access it.

Finishing off the front bezel, we find the front access ports have been relocated to the very bottom of the case. Proudly emblazoned across the door is the manufacturer’s
name. The door lifts up…

…exposing the ports available. The new towers have audio (microphone/headphones) jacks, in addition to the pair of USB and lone Firewire port carried over from before.

Also carried over unchanged are the feet used on this case. The
lighted feet.
I reviewed recently will fit on this chassis, as well.

Looking around to the back, we see a few differences from the older cases. The fan grilles mirror the honeycomb pattern the side panel received. These will be slightly more
restrictive than the wide waffle type pattern used previously

Alongside the expansion card slots are some angled holes, to add a little ventilation in that area.

While this looks familiar, there’s a host of subtle improvements that make this new version far better than the old. Let’s start at the top.

This row of screws are half of the new drive retention mechanism. Gone are the drive rails. Simply install these screws into the four holes you’d normally put them into.

Once installed on the drive, they slide in these channels, and get locked in place by the quick release latches at the end of each channel.

I’m not entirely certain I like this feature, as all four corners of the drive must have these screws in place to lock in. Meaning, a Digital Doc, or other similar item that is only
half length, and uses just the front screws aren’t going to work with this case. You can put two screws onto the DigiDoc/etc.., but they will not lock into place, because they’re only half length.

It certainly is easier to use than the rails, but limits you to what you can (and cannot) install in your bays a bit. 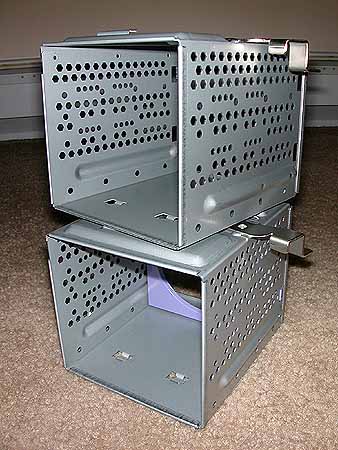 Functionally, the drive cages are unchanged, but have received several rows of vent holes in each side. Why? I’ll show you…

Located behind the upper drive cage, is now provision for a 92mm case fan. Set to blow in, it will move cool outside air thru the drive cage in front of it. Or pointed out, pull heat out of the case.
This blowhole also gets the honeycomb treatment. The case panel has a matching hole directly over this interior one in the motherboard tray.

This isn’t entirely a bad thing, as this design adds structural integrity to the chassis. These have always been stout cases, and this is one reason why.

Below the drive cages, is the familiar plastic fan holder. These are easily removable, and they’ve now given us reason to. See the funky plate on the floor?

It’s provision for a 3rd drive cage, is desired. While it doesn’t quite line up perfectly with the fan hole in the front of the chassis, it’s close enough to let a lot of air in. Pop the fan holder out,
and a cage drops right in. This increases drive capacity from 10 to 13, if needed.

Visible above are a trio of large wires coming in from the front. These are the front access port cables. Here’s the business ends of those, which plug right in to your motherboard;

They’ve changed these from individual wires to single 2×5 pin blocks. Much easier to connect. Just double check the pin out of your motherboard in it’s manual first.

The front panel switch and LED leads are unchanged.

Also new is this mechanism to retain the expansion cards, making this area totally toolless. An “L” shaped metal retainer sits over the edges of the slot openings, and holds everything in place.
To remove it for access, simply lift the green handle up…

…and a tab that fits into the slot marked by the red arrow pops out. Swing the retainer out to the side, and you have access.

With this new retainer, come new slot covers. These new pieces are really only compatible with the new retainer. Circled is a small nib, which fits into the screw hole usually used to mount a card.
These covers will fit into other cases, but are somewhat useless without the retainer to hold them in.

Should you lose or damage the retainer, the screw holes are still there, for backwards compatibility. Just use regular covers and screws.

Very minor differences (mostly in cable routing) are found under here. It is worthy to note that these fan grills did not get the honeycomb that the rest of the grills got. These will
flow good air, just like before.

The drive bay knockouts got some large finger holes to aid in removal (or allow a bit of air through, if not removed). A small but nonetheless nice touch. They even went the extra mile and folded the
edge over on them (on the back side), so you won’t slice your fingers to ribbons pulling them out.

Not much has changed on the back side of the front bezel, apart from the aforementioned relocation of the front ports.

Note here, that the bottom half of those decorative center panels also has a removable filter behind it. You’ll still get some dust in your case, unless you mount filters on the blowholes as
well, but these filters will cut down a great deal of the dust that would have gotten into the case without them there. This is one thing Chieftec owners have wanted for a long time. It’s great to
see them (finally) included.

The lower center panel is held on like the one on the door is (described earlier). 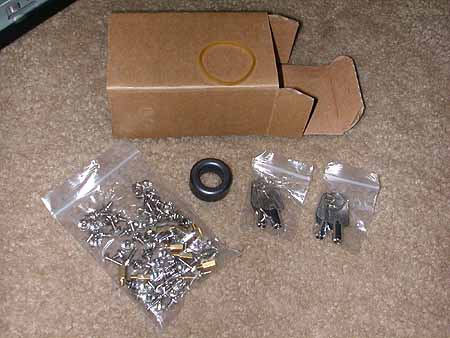 As usual, Chieftec ships these with a small box full of bits and pieces…this box is full of screws and standoffs, and two sets of keys. With the new optical drive mounts, and the expansion slot retainer,
you ought to have plenty of these left over when you’re done assembly. 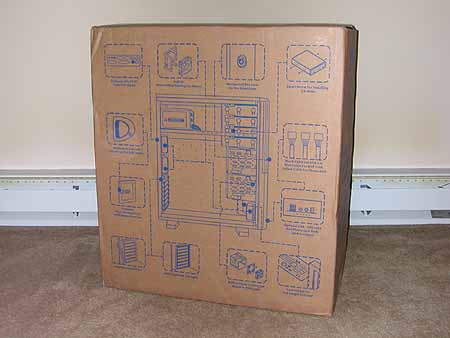 Aside from a couple issues, this case is a well designed, remarkably sturdy product. Innovative, yet backwards compatible with previous designs.

Given the amount of metal used to make this, it’s not surprising it’s as tough as it is. It does make for a heavy case though. Twist or flex in the chassis is non-existant. Sharp
edges are hard to find. You’ll be hard pressed to cut yourself building a PC in one of these.

The big thing that doesn’t sit all that well with me is the issue with the optical drive mounting. That, and the (still) non-removable motherboard tray. I don’t think we’ll
ever see that one though…

The new additions to this chassis’ design are great. The toolless expansion card retainer is brilliant, and the removable filters are greatly welcomed. The fan grills
look more restrictive than they used to be, but you should still be able to move some decent air through it.

Oh…by the way, if you have a Chieftec mid tower case now, and have laboriously modded your side panel with a custom window, or graphic, it will fit on the BX chassis.
The screw holes don’t line up, but the handle/latch will hold it on. This occurred to me as I was taking these pictures, so I tried my side panel out.

I’d like to thank Newegg for letting us check this item out.

Even people buying new machines can often have legacy hardware issues. For instance, printers. Just for an example, if you take a look at HP’s Vista compatibility list, you’ll find that a few products aren’t and won’t be supported at

A few days ago, Samsung and Microsoft announced their hybrid hard drive, which adds flash memory to a hard drive. They basically said that the flash in this combo is supposed to serve two purposes: as a boot buffer and

Will AMD Ramp Up PR?

If the performance of Prescotts goes down, what does that do to AMD’s PR system? It seems to me that AMD would be perfectly justified in yanking it upward, too. If Intel devalues the MHz again, and a 4GHz Prescott

A perennial favorite gets a face lift (and more) - Brian Berryman