This article is based on what I learned from visiting Japanese overclocker
sites and trying it out myself. This is not for beginners, and is not risk-free, so
I’m disclaiming any responsibility for any damages you might incur doing this. Always
be careful and try to act logically. All names and trademarks used are the property of
their owners.

I got interested in creating my own clock generator about six months ago. I was using
a KT133 board at the time, which was pretty FSB-limited. Like most people, I couldn’t
get the board to run higher than about 110Mhz, and figured the board had been somehow
crippled.

I started researching how Turbo PLL devices worked at Japanese hardware sites. I ended up
looking at many homemade versions, and began to understand the basics behind them.

While these devices were often used to tweak BX boards, almost every motherboard can be tuned this
way.

This would have been written earlier, but the German army found better things to do with my time. 🙂

How A PLL Works

It gets an input frequency of 14.318 MHz and generates a number of frequencies out of it:

You might think that good until you find out your USB devices don’t work anymore and your clock
records an hour passing in just 53 minutes.

What A PLL Needs To Do

What you need is a PLL that increases the frequency to the areas that can use it, but not to the
areas that don’t.

You use a faster crystal to speed up the items you want to speed up, but you disconnect the items
you don’t want speeded up by removing their impedence resistors and use another crystal to generate frequencies for
those.

How To Do This

I won’t go into too much detail, since I don’t want people who aren’t familiar with this trying it.

This self made version of Turbo PLL allowed me to run my system at speeds as high as 131 MHz FSB. While I didn´t use it long at these speeds, that was only because my harddisk didn´t like 44 MHz PCI speed.

These are the parts I used to run FSB, AGP and PCI clocks faster: 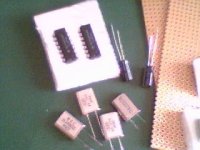 I am so happy this evening with my new upgrade that I wanted to share it with you and the overclockers.com readers. I don’t know if you have already seen them in the US, by here in France we have

It Appears Step Thermodynamics has gone out of business! This review was done in 1999. Things seem to have changed since then!   On this review I’m going to do something a little different. I’m combining a Vendor Review and

The last few days, I’ve been speaking about Bloomfields, and not all too kindly.  Some have found this baffling, if not a bit blasphemous.