SUMMARY: Mounting a heatsink on a Coppermine requires more care due to the possibility for misalignment resulting in poor cooling.

Intel’s Coppermines hold incredible promise as a premier overclocking CPU. A large part can be attributed to the superior cooling characteristics of the flip-chip design; by moving the silicon closer to the heatsink, Intel achieved higher speeds at lower temps (the 0.18 die size plays a large part also).

However, there is one issue you have to overcome; the miniscule area of the flip-chip design compared to the familiar “copper-top” PPGAs. As shown below, the chip is less than ½” per side yielding a 0.16 square inches of surface area. 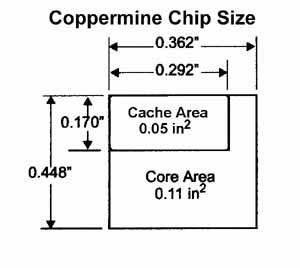 As the next diagram show, this tiny piece of silicon is pasted onto a huge carrier. The chip’s substrate is almost 2″ square – this means that about 4% of the surface area is occupied by the chip itself.

As cool as the Coppermine is, if the heatsink does not contact 100% of the CPU’s surface, temps will rise quickly and to the danger point. Therefor, mounting heatsinks on Coppermines requires a bit more care than the “clip and run” days we’re used to. As the next diagram shows, the combination of the CPU’s small area with the off-center mounting forces of a socket 370 can lead to poor contact.

This is due to the uneven forces exerted by heatsink clips made for larger “copper-top” PPGAs. The small contact point between the heatsink and the chip results in the chip acting more like a fulcrum than a stable platform upon which the heatsink rests. Most clips (e.g the Alpha socket 7 or Global Win FDP32) are designed such that they are symmetrical; the problem is that this symmetry results in uneven forces between the two sides of the clip – the result may be the heatsink leaning to one side. This results in uneven contact and poor cooling.

Dealing with this is fairly easy – I sighted along the gap between the heatsink and the chip’s carrier so that the gap looked even along all four sides. One heatsink required actually shoring up one side with some shims so that it did not lean; the Alpha required some positioning on the socket so that it contacted the chip’s surface evenly.

This is easy to do with a slotket – more difficult with a socket 370 board already in the case. In any event, misalignment will be very obvious as you monitor the chip’s temperature.

The next great overclocking frontier. –Ed

You probably have keychain material CPUs lying around that could whip Itanium when it runs 32-bit. Hell, maybe even some of the ones you’ve already made into keychains, at least for the moment. You can see Tweakers.net’s benchmarks here. This