This means that the article’s value of 515 W/mk (originally found on WESGO’s website) is incorrect and the graph and calculated values for Cusil’s heat spreading resistance should be disregarded (thanks to webmedic for the tip).

We are indebted to Shannon Birt for informing us that his extensive sub-zero experience (HERE) indicated that the optimum cold plate thickness was 2 to 3 mm.

Gabriel Rouchon of Swiftech was generous enough to share his thoughts about some general cold plate guidelines based on the years of their testing:


“Air cooled TEC’s require thicker cold plates to move the CPU as far away as possible from the hot side (the heat sink) and reduce parasitic heat radiated back by the heat sink towards the cold side. In that case, cold plates are actually referred to as “spacer blocks”. We use copper blocks as thick as 1/2″ for this.

The issue is not as critical in liquid cooled setups:

There are many factors to consider in any assembly. Absolute performance is often traded-off for mechanical or economical reasons.

Altogether, the ultimate goal is to (achieve) a good compromise, dictated by the ‘flavor’ you want to give to your (system).”


There is another factor that must be dealt with when using a cold plate (with TECs) and that is the 10 fold difference in recommended clamping force between the CPU and the TEC. Typical TEC manufacturer assembly recommendations call for 150 to 300 pounds of clamping pressure, while AMD’s CPUs are between 12 and 24 pounds (AMD doc # 23794B).

A common reason for poor cold plate/TEC performance is insufficient clamping pressure. A separate, much stronger, clamping system is required for TECs than that used to restrain the assembly to the CPU. For Socket applications, this can be a bit of a challenge.

This article will look at cold plate material selection and the effect of thickness on the plate’s heat spreading resistance.

Readers are referred to Mike Larson’s excellent article “Cooling – An In-Depth Look” for the definition of terms and general description of the CPU cooling system.

A cold plate is one of the components of a cooling system utilizing thermoelectric coolers (TECs or Peltier Effect modules) to reduce CPU temperatures. Because TECs of a useful heat capacity are physically larger than the die being cooled, it is necessary to insert a so-called “cold plate” between the small hot die and the much larger cold side of the TEC to utilize the heat pumping capacity of the overhanging area.

This is precisely the same function that the base of an air-cooled heat sink serves – to distribute the heat to the fins from which it will be removed by forced convection. And for this reason, the cold plate material and thickness considerations apply generally to air cooled heat sinks as well.

Cold plates are normally a slug of metal having the outer dimensions of the TEC, and thicknesses from 1/16 to 1/2 in. (1.5 to 12.7 mm). Note that the very best cold plates are not solid, but are flat plate heat pipes with vastly superior thermal conductivity; unfortunately they are made of “unobtainum”.

Typical cold plate materials are aluminum and copper, but silver plates are now commercially available and the eutectic alloy of silver and copper is being evaluated.

The following are the thermal conductivity values (W/mK) used in the calculations:

I utilized a heat spreading resistance calculator HERE;
to quote from the University of Waterloo’s description:

“This application calculates two- and three-dimensional thermal spreading resistance for isoflux rectangular and strip sources on a rectangular disk, a semi-infinite rectangular cylinder or a half space. Solutions are available for a two-layer system with different thicknesses and thermal conductivities, and an isotropic medium with constant properties. For the finite problem a uniform heat transfer coefficient boundary condition is applied to the lower surface.”

The following are the assumptions used: 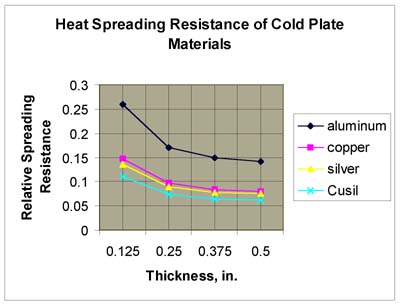 A note on the “Film Coefficient” h (W/m ²K): the value used was “2” as found in the literature. I also calculated with 200 and 20000, and while the calculated values changed the ratios did not.

An Interpretation of the Results

What can be understood from the numbers:

It should be noted that these numbers describe the (relative) heat spreading resistance which is but one of the series resistances affecting the flow of heat from the CPU to, ultimately, the air.
Limited test results do bear out the calculated relationships, and thicker cold plates have a stabilizing effect on CPU temperature cycling.

It’s certain that some are asking why aluminum is used (also for air-cooled heat sinks) if its thermal conductivity is so much “worse” than, say, copper; and there are three answers:

While the case can be made for aluminum fan cooled heat sinks for most (non-overclocked?) applications, the same cannot be said for aluminum cold plates. Copper is clearly the most cost-effective cold plate, and thicker (up to 3/8″) is better.

This article describes the construction and operation of a single-stage vapor phase refrigeration system for the cooling of microprocessors found in modern home computers and how to build your own phase change PC cooling system.