Here are the specifications as provided by the Kingston website.

The below features are actually an extension of the specifications above, but provide additional information on the kit.

Some of you may be interested in the JDEC and XMP profile information, so here is that information.

The Kingston marketing folks give us a no-nonsense description of the kit we are reviewing today. Precise and to the point!

Kingston® HyperX® Beast memory features a dynamic heat spreader to maximize thermal dissipation for increased reliability – now paired with a matching black PCB, the result of HyperX fans’ demands – to aggressively enhance any enthusiast’s system with the highest performance hardware and coolest in complementary design. XMP-certified and designed to work with third & fourth-generation Intel® Core® i5 and i7 processors and the latest AMD performance and gaming processors, HyperX Beast is available in dual and quad channel kits; 8GB-64GB capacities; speeds up to 2400MHz; and a lifetime warranty.”

The kit’s dimensions (with heatspreaders) are an important piece of information to know when choosing a CPU cooler that overhangs the DIMM slots. In the case of this kit, the overall height is 1.827″ (46.41 mm) and the width is 0.338″ (8.60 mm).

Once the memory was plugged in and set to its XMP profile, here is what the SPD table shows in the motherboard’s BIOS. 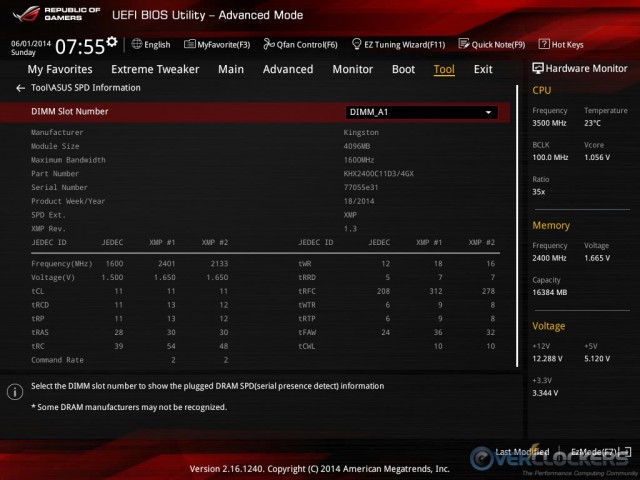 Once at the desktop, Mem TweakIt gives us confirmation of what we see above and some additional details.

The minimalistic packaging arrived in the form of a brown cardboard box with a HyperX sticker attached. The sticker gives you the part number of the kit inside and basic information on the speed and capacity of the kit. Another “factory sealed” sticker is applied to the bottom of the box to insure the contents have not been tampered with.

Upon opening the box, you’ll find a case badge sticker sitting on top of the protective foam insert. Under the top foam insert are the modules themselves packaged in pairs. There is also a pamphlet enclosed that explains the warranty and installation procedures.

The Kingston HyperX Beast is an attractive memory kit and exhibits a black/red/white color scheme. The heatspreaders feel extremely well made and the design appears ready to accommodate maximum heat dissipation. Here are some photos taken from various angles, I think you’ll agree we have a very nice looking kit here.

No memory kit is worth much if it can’t run reliably at its rated speed and timings. With that in mind, we’ll pull out our UltraX R.S.T. Pro USB RAM tester, which was kindly provided by UltraX. The R.S.T. Pro is by far the most demanding way to test memory. The R.S.T. Pro is often used by memory manufacturers to test units before sending them to retail channels and to keep an eye on quality control at the factory. Most manufacturers loop the test three times and call it good. However, overclockers are a demanding group, so we much prefer to run five loops. The R.S.T. Pro tests every possible address, which can take a very long time to complete depending on the amount of memory installed. In the case of today’s review sample, it took just short of seven hours to complete all five loops on the 16 GB kit. After beating on the HyperX Beast kit for that period of time, I’m happy to report no errors were reported by the R.S.T. Pro. Stability at rated speed and timings… Check!

To check for stability in-OS, we use HyperPi 32M. HyperPi runs as many instances as your CPU has threads, so in this case that’s eight. If there is any instability, HyperPi will usually find it… quickly! The 32M run passed without issue; so in-OS, stability is confirmed as well. After passing the torture test that is the R.S.T. Pro and the in-OS run of HyperPi 32M, I think we can declare the kit rock stable at advertised speeds and timings. And, just as Kingston says… perfectly compatible with the Z97 platform.

The test system we’ll be using today consists of the following components.

We have a wide variety of kits for comparison today, which range from DDR3 1866 Mhz to DDR3 2666 MHz speeds. Given the wide variety of comparison kits, direct comparison is not the intent here, but rather we want to give you an idea of how (or if) the speed variations relate to performance increases. If you’re looking for a direct comparison, the closest match we have is the G.Skill DDR3 2400 MHz TridentX 2X8 GB kit. However, that kit consists of only two modules and has a slightly lower timings. So, while it’s a close match, it’s certainly not exact. The other thing to keep in mind is that all the other comparison kits were tested on the Z87 platform, whereas today’s kit will be tested on the Z97 platform. As we’ve noted in our past Z97 motherboard reviews, there is very little difference (if any) between the two chipsets as far as performance goes, so results should stay pretty consistent.

The graphs below are based off of percentages with the Kingston HyperX Beast kit being the basis, and therefore, always being 100%. The raw data used to make each graph can be found in the table below each chart. The first set of tests are from AIDA64 Engineer Edition and include the memory read/write/copy/latency benchmarks. The higher percentage is better, except for the latency test, where lower is better. They HyperX Beast kit beat all comers in the read test and fell right where it should in the write, copy, and latency tests.

Cinebench and 7zip test rendering and compression, respectively with very little difference between all the kits recorded. This is pretty typical behavior, but the HyperX Beast kit did manage to score right on par with the faster G.Skill DDR3 2666 kit.

Our video compression benchmarks consist of x264 and PoV Ray 3.7. Here again we see little difference between the comparison kits, but the HyperX Beast did manage a sweep in the x264 Pass 2 and PoV Ray benchmarks. The pecking order fell right in place on the x264 Pass 1 test.

Our 2D benchmarks include SuperPi and wPrime. The wPrime testing shows a complete sweep for the HyperX Beast kit in both the 32M and 1024M runs. The SuperPi results show the HyperX kit losing out to only the G.Skill DDR3 2400 and DDR3 2666 kits in the 32M run. The 1M run showed basically a 1% difference or less between all of the kits, which is well within the margin of error across the board.

The Kingston HyperX Beast kit performed very well in our benchmarks, consistently performing just as we’d expect and even better in some cases. Nothing to complain about on the performance side of things.

Overclocking proved to be a pretty simple affair. I was able to get the kit HyperPi stable at 2666 MHz by simply raising the voltage to 1.75 V. By using that voltage setting, I was able to keep the timings at their rated value of 11-13-13-30-2T. That’s a pretty impressive overclock considering we’re talking a four-module kit here. Once past the 2666 MHz speed, the timings had to be loosened to a point where any performance increases were pretty much negated. For 24/7 usage, I don’t think going past 1.75 V would be wise, unless you’re able to install additional cooling for the memory.

Returning the memory speed back to its rated 2400 MHz, I turned my attention to the timings. By leaving the voltage set to 1.75 V, I was able to set the timings to a stable 10-13-12-30-1T. The kit was having no part of CL 9, but CL 10 isn’t bad considering it’s a four-module kit. The command rate and tRP were lowered too, which was a nice bonus. Truth be told, this kit will happily run at a 1T command rate under almost any scenario, even though the XMP profile sets it at 2T.

The Knigston HyperX Beast performed terrific under all the testing we performed. As to the question of Z97 compatibility, there is no doubt it works flawless on the new chipset. The kit proved to be rock stable at its advertised speeds and overclocked darn nice too! Aesthetically, the kit certainly looks the part and would be a good match for a variety of custom system builds.

At the time of this review, the kit is available at Newegg for $184.99. This lands it in the same range as the G.Skill TridentX 4X4 Kit, but almost $100 less than a Corsair Dominator kit with similar specs. So, the price is right about where one would expect.

If you’re a PC enthusiast, a gamer, or someone looking for some memory overclocking fun, this kit is right up your alley. If rock solid stability on the Z97 platform is what you’re looking for, then this kit won’t disappoint there either. An all around great performing memory kit at a good price can only mean one thing… Overclockers approved!

NVIDIA partners are beginning to roll out their new GTX 750 graphics cards and the new Maxwell architecture they offer. As we discovered during our launch day article, Maxwell GPUs bring a lot of new technologies along with the new architecture. Most notable is the high power efficiency they bring to the table, which allows them to be used in lower end systems that might not have been able to handle the power demands before. Today, we’ll be looking at one of Galaxy’s new Maxwell GPU offerings in the form of their GTX 750 GC 1 GB Dual Fan model. Galaxy has added several of their own unique enhancements from the reference design cards, such as an expanded PCB, proprietary dual-fan cooler, and a factory overclock. It all sounds good on paper… Let’s go find out! Read More

Today, we have an opportunity to review a budget minded CPU cooler from Zalman’s CNPS10X line of heatsinks. The CNPS10X product line has been kicking out coolers for a few years now, but their latest one (and today’s review sample) is the one they call Optima. The word optima is plural for optimum, meaning we should see optimum performance in more than one area. Knowing Zalman like we do, these areas are undoubtedly thermal performance and quiet operation – no big surprise there! Read More

Compact Flash Card Round Up: Transcend, Verbatim, Kingston and Scythe

With USB 3.0 becoming more and more prevalent in today’s world, isn’t it time you bought something that could use all that high speed you have available? If you own a DSLR it’s your lucky day because today we’re testing high speed CF cards and readers. Read More