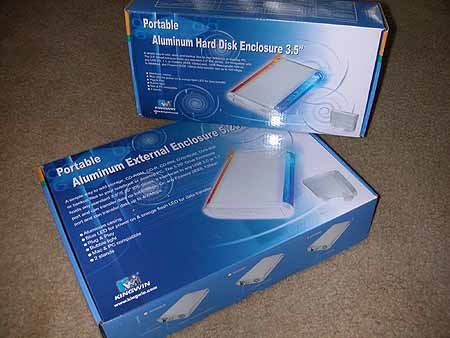 The good folks at Kingwin were kind enough to send one of their 5.25″ Portable External Enclosures
for us to take a look at today.

A few days ago, I reviewed Kingwin’s 3.5″ External Hard Drive enclosure (the smaller, top box shown above). The 5.25″
enclosure we’ll examine today (the larger, bottom box above) is extremely similar to the 3.5″ model, in design and function.

Both are constructed of heavy gauge aluminum for their chassis, have large acrylic bubble lights running the length of each side, and (these two particular models) use the same
Cypress chipset based USB 2.0 controller.

As I did in the review for the smaller enclosure, we’ll look at the specs, take a closer look at how it comes apart and then goes back together with your drive installed, and then
run some tests on it to see how well it performs.

Used with an optical drive, data thoroughput should be very good.

Kingwin offers three different variants of their 5.25″ model as seen here, with the differences being connectivity. They are:

The exact model seen here is the third, with USB 2.0 only.

These items are also available from Kingwin in a black finish as well as silver.

Let’s look at what comes in the box next. 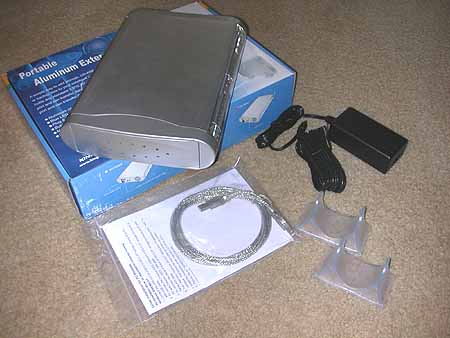 Like it’s smaller sibling, the 5.25″ enclosure also comes with (clockwise) a power adapter, two stands, and a bag containing the USB cable, driver disk, and manual.

Included also (inside the enclosure) is a small bag with eight screws (four coarse and four fine thread) for mounting your drive. Nice touch. Including both types saves you from
hunting down the right threaded screws, depending on what you want to install into the enclosure.

The adapter (required to operate the enclosure) differs between the two models, as the one used here comes in two parts, with a seperate power cord from the adapter to the AC source (rather than the adapter
having the prongs built in). It also differs in power ratings, and they are not interchangable between the two different sized enclosures. The power source to adapter cord is six
feet long, and the lead attached to the adapter (going to the enclosure) is four and a half feet long.

The USB cable measures six feet long. It’s an A to B type cable.

The User Manual details the specs as highlighted above, driver installations for Windows 9x and Mac systems (not required for Windows 2000/ME/XP), and assembly.

Next, we’ll open it up, have a closer look, and install a drive
{mospagebreak}

Looking at the end of the enclosure with the switches;

Just to the right of all of the switches and sockets, is the aforementioned 40mm exhaust fan.

Removing the four screws (two at each end) allows the end piece to come off. After which the top panel is free to slide out of it’s grooves. 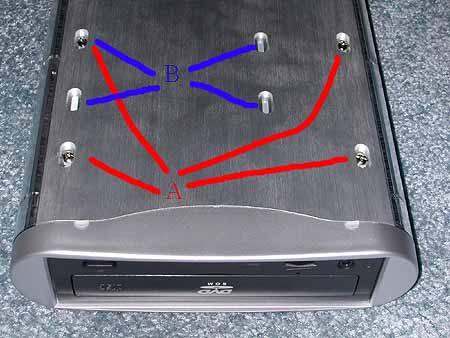 Highlighted here are the holes for mounting the drive.

This model also bottom mounts the drive, rather than using the sides of the drive, as the bubble lights prohibit side mounting. Highlighted are two sets of holes machined into the chassis;

So either size drive can be installed into this enclosure.

Looking at the end piece we removed, and the electronics attached to it; 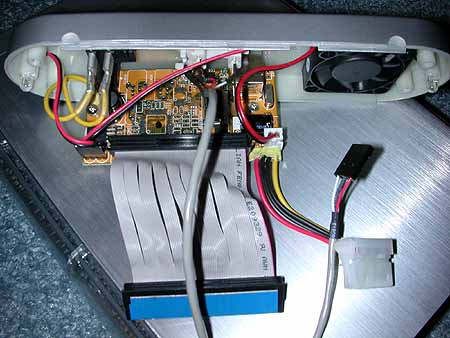 Used here is the same circuit board/controller assembly as the smaller 3.5″ enclosure, using the same Cypress chipset. Above the PCB is the audio connections. These plug into
the analog output standard on all optical drives.

To install an optical drive into this enclosure, first remove the front bay cover. Then slide your drive in through the front opening until it’s fully seated. The screw holes
should be lined right up, and you will (most likely) need the fine thread screws to secure the drive to the chassis.

Installing a 3.5″ hard drive is one step easier, in that you don’t have to remove the bay cover. These type drives will (likely) use the coarse thread screws to mount.

As you can see in a picture above, I’ve installed an optical drive into this. Let’s look at how it gets plugged in.

The audio cable gets plugged into the analog port, and the red wire = right. There should be something denoting left/right on your drive (usually in the form of L-G-G-R (left,
ground, ground, right)). If you’re installing a 3.5″ hard drive, you might want to secure the audio wire, as it’s close to long enough to reach into the fan.

Before securing the end piece, slide the aluminum cover back on into it’s grooves. Take care as you finish up that the LEDs fit into their recesses in the acrylic bubble tubes.
If the end piece isn’t lining up right, this is most likely why.

Now that it’s back together, let’s see how well it transfers data to and from the PC.
{mospagebreak} 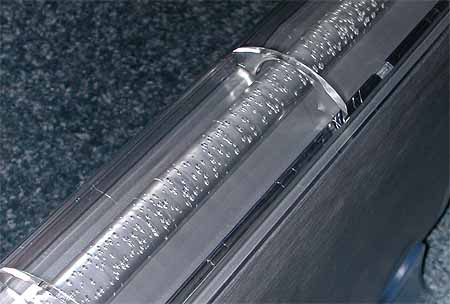 A closer look at one of the bubble tubes.
Testing/Benchmarking

When I first assembled this, I had installed a DVD drive into it. This, while working well, lacked one thing; the ability for me to measure data thoroughput in both directions.

So, I swapped out the DVD for the CDRW I had installed in my main PC.

I then put all the files I’d been saving to burn to CDR into a folder, until I reached almost 650 MB worth of data. In this folder were many sub folders of jpegs from various
articles, several application files, a complete backup of my e-mail, etc… Everything but the kitchen sink.

I then burned the files to CDR, and then copied them back to the PC in a different location, measuring the time it took for each full transfer.

I did this with the drive both mounted externally and internally to examine the difference.

I also ran The SiSoft Sandra 2004 CD-ROM/DVD Benchmark while using the CDRW, to see what numbers that generated, both internally and externally.

USB 2.0 is capable of higher data transfer rates than the optical drive itself (480 Mbps for USB 2.0 vs 33 MBps (ATA33) for the optical drive). So transfer times externally and
internally “should” be the same.

The total size of the files burned/copied: 654 MB

The system I did these tests on is the AMD system I’ve used for many other hardware reviews, and currently features;

The times recorded were indeed very consistent, across the board. Given that USB 2.0 has a higher theoretic data thoroughput, that leaves the optical drive itself as the
main determining factor in transfer times.

Using a newer, faster CDRW drive than mine might decrease these times, but again, will decrease them uniformly.

For testing times using a standard hard drive in this enclosure, you can refer to my testing here. As the two
enclosures use the same Cypress controller, it should perform exactly the same as the 3.5″ enclosure I reviewed previously. 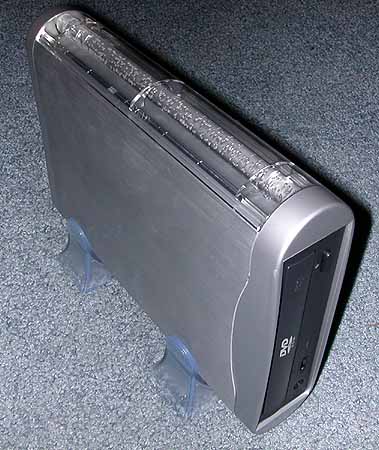 This enclosure, while offering good performance, also offers a bit of versatility the smaller 3.5″ enclosure doesn’t, in that you can install either a 3.5″ or 5.25″ drive into it.

Like its smaller sibling, it features a very rugged, aluminum chassis and large attention getting lighting.

Installing a drive into this enclosure is extremely easy, and user manual that’s included is very good, covering driver installations for Win9x and Mac systems, and mounting the drive itself into the enclosure.

Installing a DVD burner into an external enclosure like this one would be a great idea, allowing you to use a single expensive drive with several machines.

This, like the smaller enclosure I looked previously, is a very good product. I’d like to thank Kingwin for sending it out.

With all the talk about Vista debuting for a few, and upgrade coupons all around, one issue has been sidetracked a bit: 32 vs 64-bit versions. Let’s start with the good news first. As this site states: “Virtually every Windows

I’m going to be updating this as need be, but this is what we know now. If you move the component from R127 to R126, you get a memory performance increase, even with BIOS 1.00. See here (go down to

This article lists a number of freeware keyboard apps that are worth a look.