Excellent guide to trying out Linux with no-risk – Jake

Ed Note: The one area that we did not develop in listing Free PC Software was alternative operating systems – Jake wrote me an excellent email on this that is a no-risk way to try Linux – if you do try this out, drop me a line on how you made out.

I think the single best way for people to get their feet wet with
Linux is to download and burn a Live CD – many Linux distros [distributions] have
them and some are better than others. This is a completely non-committal way to try out Linux – doesn’t alter your system at all.

You put the CD in, boot up, and a full Linux desktop comes up and
runs completely from the CD and your system RAM – your hard drive remains
untouched.

This way you can explore the included software, browse
the internet, adjust the look and feel, and play around without
committing to a hard drive install. The default Ubuntu Dapper
install CD will automatically boot up as a live CD. There is an
install icon on the Live CD desktop that will begin the installation
process and dialogs if you choose to click it.

From there the user might want to set up a more permanent
installation so that changes and configuration remain from reboot to
reboot – also, as you can imagine performance when running from a CD
is not the best.

A good option here, one that the Ubuntu installer
does very nicely, is to resize the Windows partition and make room
for the Linux installation. It automatically creates a text menu at
boot up, allowing the user to choose whether he wants to boot into
Windows or Linux. All this is done in a very clean and automatic way.

From there I see the following natural progression:

1. If you have only a wireless connection available, you’ll need to
follow one of many HOW-TOs on getting your machine’s wireless up and
running. My preference here is a program called ndiswrapper. If a
Windows driver exists for your wireless chipset, you’ll be able to
use it under Linux in conjunction with ndiswrapper. This will
require minimal command line work and all that is detailed in the
howto. More info
HERE.

As a side note, I’ve actually had several wireless setups that worked
out of the box with Ubuntu, but that will obviously vary by hardware
vendor. Ethernet will work fine out of the box under Linux.

2. Run Automatix to get all of your proprietary accelerated graphics
drivers, codecs, plugins, etc. This will also take VERY minimal
command line work.

At this point, Ubuntu should be a 90%+ replacement for Windows for
most people (unless you’re a big gamer). I should also mention WINE,
which makes it possible to run many Windows programs at native speed
under Linux.

In my experience, just running a Linux box drives the desire to hack
and modify and tinker the OS and its apps to get better performance,
more features, and more functionality. Most people will be perfectly
content after steps 1 and 2 above, but a select few will want to go
further with the Linux experience.

For these people, the only thing
to do is embrace the command line rather than run away from it.
Doing so allows you to harness many more aspects of your system.
The world of Linux hacking/modding is in many ways a software
counterpart to overclocking. Overclocking = having total control
over the hardware details to maximize performance, while hacking/
modding the Linux OS = having total control over the software to
maximize performance and flexibility.

So becoming comfortable with Linux is really just a process that goes
something like this:

1. Burn and use Ubuntu Live CD – A standard Ubuntu install contains a selection of useful applications. In the Applications menu you will find OpenOffice 2.0 for word processing, spreadsheets, and presentations, Gimp for image editing and more: 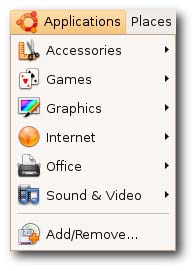 2. Decide to install alongside Windows as a fallback (included in the
Live CD).

a) If you need wireless and it doesn’t work out of the box,
GO HERE.
b) Run Automatix to improve support for codecs, plugins, drivers, etc.

3. Join the community for help and How-Tos:

Ubuntuforums (note the “Beginner Community” at the top – GOLD!)

How To Get Help

At this point Ubuntu is totally functional, but the more adventurous
can try out bleeding edge software like Compiz/Xgl, build software
from source, etc. A few other helpful links:

– The Linux directory tree diagram (which files belong where).

– Almost every Linux command you can think of.

– Customize the look of your desktop
HERE.

I could go on forever, but this is just my take on what a total Linux
newcomer would need to get started (warning: it gets ADDICTIVE!).
Hope it helps.

1. Backup, backup, backup. A Live CD won’t touch your hard drive,
but there is that little “install” icon just staring at you from the
desktop. Most people would choose the “resize Windows partition and
install Ubuntu” option during the installation process (which in my
experience has never adversely affected the Windows side), but
there’s also an option to erase the whole hard drive and start from
scratch. You’d have to click through several explicit warnings to do
anything, but I thought it would be worth mentioning. When
installing anything, the user should always have a backup of
important data.

2. If the Live CD doesn’t boot, make sure the CD drive is set to boot
before the hard drive in the BIOS.

I received the following email from Greg:

I read your article on “Linux, are we there yet” and I liked it. I keep a knoppix CD around and have installed Linux myself, but I find that Linux wears thin fast since it is trying to replace Windows. My question is:

What is the killer app?

This may be a good article or question to the readers. Apple II had Visicalc, Apple Macintosh had the user-friendly GUI. IBM had Lotus 123, Word Perfect. I think for Linux to become a Desktop replacement there has to be a real reason to switch – for example if it transcoded DVD’s faster, compressed video faster or had a really cool program that just doesn’t run on Windows or Mac OS. I’d like to see the answer to that and I don’t think I’m the only one.

An excellent question! As I am trying different Linux variants, I ask myself the same question – why bother? There is no question that Linux is different enough such that spending some time on documentation is a must. However, this is not a question of spending umpteen hours – maybe a couple of hours to understand how to do things and really not much different from when you first encountered Windows – more on this at another time.

However, to the real question of “Why?”.

In truth, there are no “killer apps” in Linux except one – LINUX. One reason I say that is because Linux is inherently more secure than Windows – Jake was nice enough to answer this question as follows:

No need for anti-virus or anti-spyware software on a personal
computer running Linux.

While a firewall may be useful if you open a
lot of ports to run services on (like a web server, ssh, or print
server, etc.), Ubuntu has none of these activated by default so a
firewall really isn’t necessary. However, for the sake of argument,
Linux (or any other OS for that matter) is not inherently impervious
to attack. Such an attack can usually takes one of two forms:

1. Social engineering is used to convince you to run an executable
that contains malicious code (think email attachments or downloads,
etc.). This works well in Windows because it’s so easy to run an
executable (just double-click) and the user running it usually has
permanent, full administrative privileges, meaning that damage can
extend beyond the user to the entire system.

First of all, you would have to make the binary
executable by changing the permissions on the file.

Then you would
have to run it. None of this can happen automatically – you have to
do it. This “inconvenience” gives you more time to think about
whether or not you really want to do this. Even if you went through
the effort to make malicious code executable and then you ran it, any
damage would be contained to your /home directory and would not
affect the system, since only the “root” user can alter the system.

That’s why running Linux while logged in as root (ie you never have
to give your password to make system changes) is considered insane,
and nobody does it. You may have noticed that to do anything in
Linux you are frequently prompted to give your password. This
*temporarily* elevates your privileges (if you’re an admin user) so
that you can perform legitimate system functions, like installing
applications.

So Linux, while not technically impervious to malware,
makes it extremely difficult to run code unless you really really
want to do it.

Also, there is an emphasis on installing applications from the
package repositories that your distribution provides. If you’ve ever
used Synaptic (or “apt-get” on the command line) then you have used
Ubuntu’s repositories.

This is basically a protected and curated
server that hosts all the packages (.deb files) used to install
applications. These are a trusted source and the software found in
these repositories is known to not have any hidden malicious code.
Using the official repositories, you’re safer than downloading and
installing a .deb from some Chinese website.

2. Vulnerabilities may be discovered in various components of the OS
which allow the execution of arbitrary code.

Think PHP or Apache of
Firefox vulnerabilities which periodically make the headlines. As
users, we have less control over this, but the open source community
has a great track record for very speedy fixes. Since the code is
open to public scrutiny, vulnerabilities are quickly found and
patched.

Ubuntu is set to check for updates daily, and patches are
often out mere hours after vulnerabilities are discovered. Best
protection here is to stay current on updates.

Also, don’t make your box into a server unless you’re already behind
a router or know what you’re doing. I’ve got a lot of stories
there. Desktops are tough nuts to crack, but once you start opening
ports and running services to the open web it’s a whole different
ball game and you really need to know what you’re doing in order to
stay secure.

So my take on the “killer app”:

So I say the killer app is Linux itself, with its inherently more secure architecture and with the ability to mount a fully functional, secure PC with high quality software at no or minimal cost.

There’s no way to get around it: An Overclocker’s life, be it frugal or expensive, inventive or acquisitive, will always center around buying new parts. The following is intended as a Beginner’s Guide to the selection and purchase of the