SUMMARY: Cooling the motherboard’s back does do some good, but it’s way overstated by in-socket thermistors.

I’ve not been paying a lot of attention to in-socket thermistor readings since I started using a digital thermometer to record temps; on most heatsink reviews, I do note Motherboard Monitor readings as an “FYI”. However, I received some mail commenting on what we did with Motherboard Cooling. Mike Warrior’s email best summed up the responses I received:

Wanted to say that you’re probably doing more work “interfering” with the socket-thermistor than you are in actually getting a real CPU-temp drop. Yes, the pins and the backside of the MB, but how much does cooling the pins really get to the CPU Core?

This is another one of the problems with socket-thermistors. You can do stuff to easily “manipulate” the readings in your favor, often times not knowing that it is manipulating the reading. For example, I have both P3s and Socket-A chips, and I’ve done tests trying out various ways to manipulate socket-thermistors:

One was to take a compressed air can and blow it for 5 seconds at the gap between the socket and motherboard. With a Socket-A board, I got a temp drop of 4-6C. With a P3 socket-thermistor reading, I got a drop of around 3-4C. With a P3 internal diode reading, I got no drop in temp. Other methods, such as focused Nidec “squirrel” cage fans were tested as well, and they likewise produced drops on socket-thermistor setups but showed no drop when measuring CPU core temp.

Just thought you should know that you may indeed be getting a CPU drop, but chances are that it is extremely minimal (probably 2C at most).

One thing is, was the system stable before hand? Because with socket-thermistors, lower-temps do not always mean greater stability. I’ve had people email me stories about how ThermoEngines dropped “CPU temps” but they had less overclocking “maximum”.

So I decided to do some more testing and see what in fact goes on.

I used my ABIT KT7 for this test with a Duron 800 @ 1000 MHz, 1.9 volts, first cooled by an Alpha PEP66 with a rotated shroud, Delta 38 fan. I snaked a thermocouple under the socket and used a small piece of foam to hold it against the CPU’s back. I located it next to the in-socket thermistor so that it would read CPU back temps in the same area. I recorded CPU temps with a thermistor drilled into the base of the PEP66. Finally, I recorded temps running Prime 95 first with no motherboard back cooling, then with a 60 mm fan aimed at the back of the motherboard.

Some difference! Adding a back fan dropped CPU temps by 0.5 C, while Motherboard Monitor tells us we are 3 C better. Also note that the motherboard temp reading is about 4 C lower than the actual temp. Motherboard manufacturers adjust the readings to approximate what they feel the CPU temp should be – I don’t know if it’s linear or not.

We have noted repeatedly that using the in-socket thermistor for heatsink testing is a dubious proposition at best and at worst – misleading. I’m doing more testing on motherboard back cooling and socket temps as I write this and will report results tomorrow.

For example: How much do you think adding a peltier on the back of a motherboard will drop CPU temps? Stay tuned.

BTW: Thanks to all who wrote in pointing out the problems with in-socket thermistor readings – looks like we are all getting educated!

SUMMARY: Aiming a fan at the back of the motherboard will get you a degree of two at best, although in-socket thermistor temps will register much larger gains.

In our continuing quest for cooling, we do see some gains by cooling the back of the motherboard. However, what the REAL gains are is somewhat murkier; a number of readers emailed about artificially impacting socket thermistor temps with cooling air. So I trotted off to my little lab and set up a series of tests to see just how much we can gain by cooling the BACK of the socket.

When you turn over a motherboard, without exception there are a zillion little pins sticking up all over the place. Now if you want to mount something on the back of the board where these pins reside, you have a problem, especially with the socket pins. You can’t mount metal on them as it will short out everything; so my idea was to epoxy a coating over the pins to make a platform, and then epoxy a copper plate on it.

Before I did that, I methodically clipped the pins as short as I could; this is on a SOYO K7VTA-B. I used a small wire cutter and spent an hour or so clipping away. If someone had a real steady hand, maybe they could use a Dremel, but one slip and you could kill the board.

After I clipped the pins as closely as I could, I epoxied the first layer to cover the pins. I made sure no pins stuck up out of the epoxy layer. 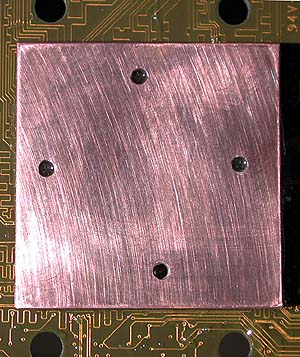 Then I epoxied a copper plate over the pins, as this pic shows. It was one I had from some earlier experiments – ergo the holes. 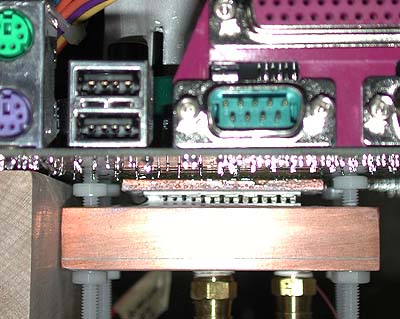 I used the SOYO K7VTA-B running a Duron 800 @ 1000, 1.9 volts, CPU stressed by Prime 95. The waterblock pictured above is a Danger Den block that is machined to use the four Socket A holes.

Right away, a few things popped out:

Directing some cooling air at the back of the motherboard will get you a degree of two off CPU temps. Considering the level of effort, it’s close to a no-brainer. Anything more aggressive is going to be difficult to implement and results may not be worth the effort. Whatever is done, in-socket thermistor temps will read substantially lower than realized cooling.

Voltage First, an MSI K7TPro website has just been started here. Second, there’s a little “feature” of the K7TPro2 Duron users should be made aware of. The motherboard does not let you set voltage to 1.85V. Rather, it lets you

Ed Note: An interesting experience – sometimes it’s the “little things” that count. Well, I was flashing my KK266 to the 307 Turbo BIOS the other day when, in mid flash, the system froze and rebooted on its own…Needless to