I realized my AGP video card was dying on me and causing instability at
150 MHz. I swapped it out for a cheap PCI card, and much to my surprise I
got the board up to 155MHz! 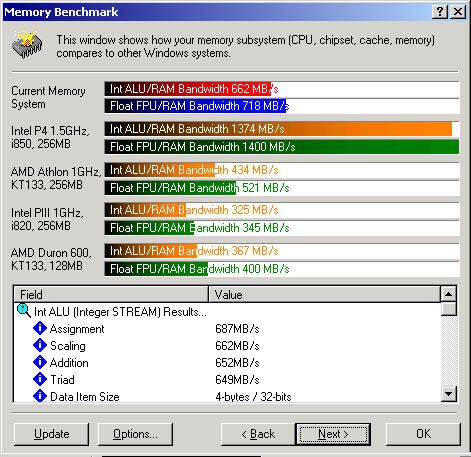 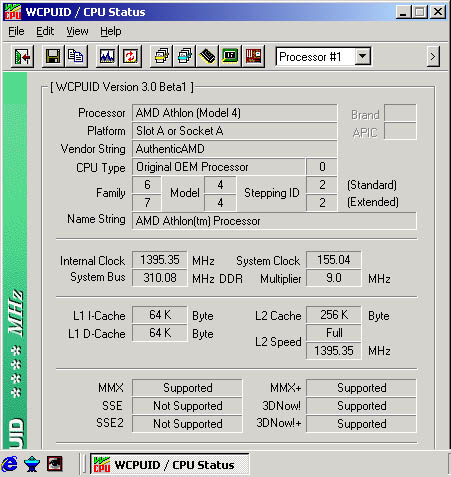 Now that 266 MHz front side bus, Socket A DDR boards and RAM are starting to appear (with volume quantities just a few weeks off), many people may be asking themselves whether it’s worth the upgrade. After all, you have to invest in a new motherboard and RAM.

One of the features of these new boards is the ability to run your Thunderbird or Duron at a true 133 MHz (266 MHz DDR) front side bus. Some older boards allow RAM to operate up to and beyond 133 MHz, but the system bus is separate and usually limited to no more than 220 MHz DDR. DDR SDRAM is definitely a key player in the performance increase of this new platform, but how much of this increase can be attributed to the new bus speed?

What if there was a way to run your processor at 266 without having to dump your current SDRAM? Sound interesting? Well, say hello to the Via KT133A chipset – Via’s stepping stone to 266 – without the need for a costly RAM upgrade.

To accompany this capability, how about taking one of the best Socket A motherboards and mating it with this new chipset. Abit thought this was a good idea and they have answered with the KT7A. As you might suspect, the KT7A is essentially the KT7 with the addition of the Via KT133A chipset. If you’re hesitant to make the jump to DDR, but you’re looking for a performance boost, read on – this may be just what you’re looking for.

First, let’s take a quick look at the board itself. I don’t intend to do a full review of the board’s features since the KT7A is essentially identical to the KT7 except for the updated chipset. In fact, Via made KT133A pin to pin compatible with the KT133 so manufacturers can easily take an existing design and substitute the new chip. 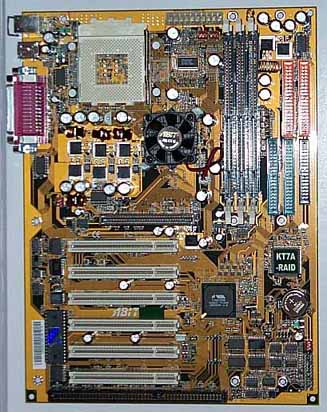 This does raise the question as to whether or not the KT133 was “crippled” to make the full range of bus speeds an impossibility. Marketing strategy perhaps? If you would like to see a complete review there are several online now – you can find one here. At any rate, lets have a look at some noteworthy features:

Other notable features include an excellent layout, BIOS control of multiplier, FSB, Cpu Vcore and I/O voltage as well as a plethora of tweaking options. Abit has done an excellent job by offering what may be the most comprehensive BIOS to date. If you enjoy tweaking, you’ll be in heaven with this board.

On the flip side, if you’re not comfortable adjusting BIOS settings, this board may overwhelm you. One interesting feature is that a fan must be connected to the #1 header or the board will power off. This is intended to protect your processor in the event you forget to plug in the heatsink’s fan. While it was thoughtful of Abit to incorporate such a feature, it may cause problems should you wish to connect a high wattage fan directly to the power supply.

Without further ado, here are the results with Sisoft Sandra version 2001.0.7.10: 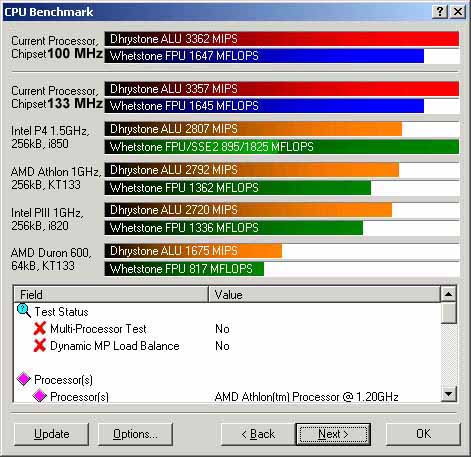 Well, this is interesting to say the least! Not at all what I expected. I suspect the reason for the slightly lower score may have something to do with the combination of multiplier and FSB. At 9X133, the processor is not running a clean 1.2 GHz. (1197 to be exact) Still, we’re only talking about a measly 3 MHz. Let’s see how the multimedia results look: 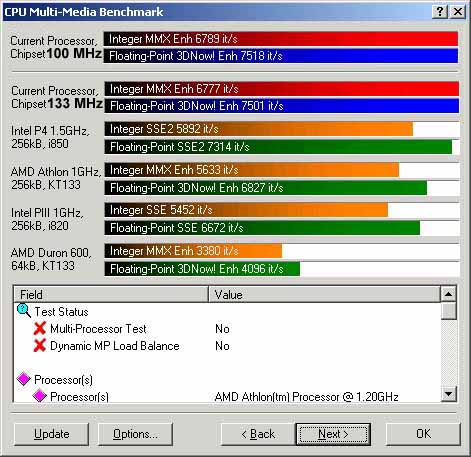 Here we see the same trend – slightly lower scores at 133 MHz due to slightly lower speed. The memory performance is an entirely different story. For both tests at 100 and 133 MHz, I forced the RAM to run at 133 MHz. I did this in order to isolate any performance gains attributable to the increased bus speed alone. The results are quite interesting: 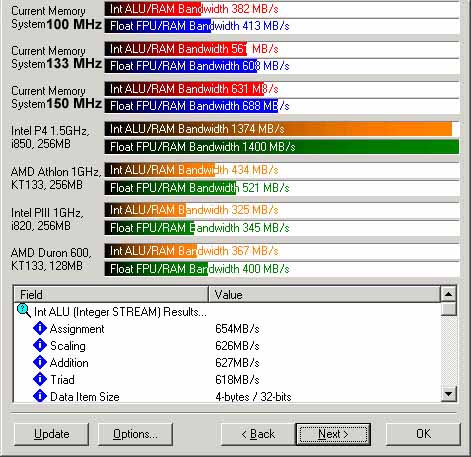 Wow what a nice improvement! Keep in mind the only difference is the system bus speed – the memory was running at 133 MHz during both tests. It looks as though the higher bus speed gives a generous boost to overall memory throughput. I kept raising the bus speed until I was able to reach a high of 150 MHz (300 MHz DDR!) Although this is 100 MHz shy of Intel’s 400 MHz bus for the Pentium 4, it’s still very impressive. Here are some more figures likely to make you salivate: 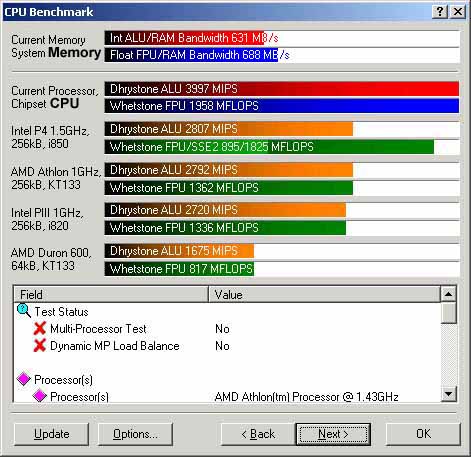 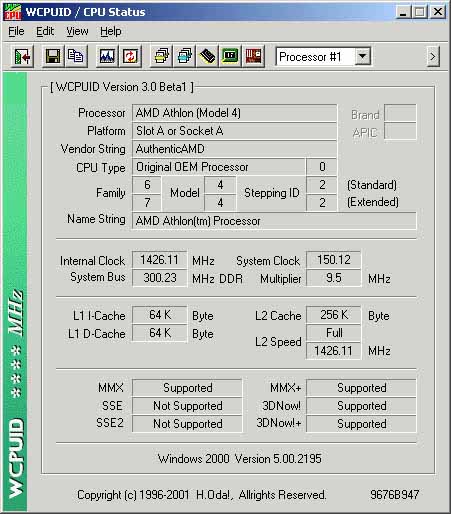 The increased bandwidth definitely allows the system to spread its wings. In addition to 3D Mark, I averaged some runs with the old team Lamb Chop Seti work unit, under client version 3.0. At 100 MHz, completion times consistently came in around 3:38 compared to 3:27 at 133 MHz. The Seti client is very sensitive to memory performance and overall bandwidth; here again, the increased bus speed shows its presence.

The KT133A chipset definitely offers a performance increase, but it’s not as dramatic as some may be hoping for. The results of the Sandra CPU benchmarks are inconclusive, but it doesn’t appear as though the higher bus speed is boosting processing power.

On the other hand, the memory scores are quite dramatic. At 150 MHz, this board is approaching some of the lower scores I’ve seen for PC2100 DDR. It’s clear that the increased bus speed makes the biggest difference in memory subsystem performance.

Overall the KT7A performed very well, aside from being a little finicky with my choice and placement of RAM. The KT7A certainly achieves its goal of offering an interim platform for those not ready to give up SDRAM, but I don’t think the performance gain warrants an upgrade from a KT133 platform.

On the other hand, if you were planning on building a new system right now, I would definitely go for a KT133A board. DDR boards and RAM are just now starting to become available and, in my opinion, prices are too high. If you are looking for a major performance upgrade, I would hold off until AMD 760 based boards and RAM come down in price.

Ed Note: Cem Aygun runs a Turkish site called TurkOC*. His experience with the Iwill KK266 is illuminating. TurkOC* also developed a new TurkOC* KK266 Overclocking BIOS! I have not tried it yet, so if you have this board, use

The best method to cool your 9250 clock generator on the P3V4X motherboard is by going to Radio Shack and buying one of their anodized aluminum heatsinks for TO-220 packages (transistors, voltage regulators, etc). Cat No. 276-1368. Electronics has been