SUMMARY: Similar rated Peltiers, or TECs, perform about the same. Look at the ratings but also look for potted units. However, carefully consider what to expect with high wattage CPUs – you could be very surprised! 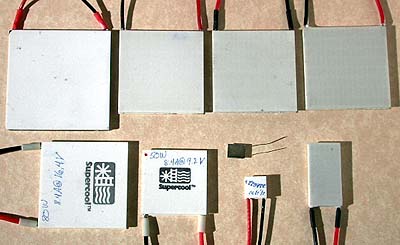 Marc-Antoine Menard was kind enough to send me a whole bunch of TECs to test out. As you can see, TECs come in all shapes and sizes. Of interest to overclockers are the 40mm TECs that are typically used for CPU cooling. I also just received a 156 watt 50mm TEC I bought from BE Cooling to try out, so I threw that into the mix also.

Note that the TECs tested were all rated at more than 12 volts; this is not uncommon as you get into the 70+ watt range. I used an AT 12 volt, 230 watt power supply, typical of how we are powering TECs. In actual use, I would strongly urge anyone using a TEC to separately power them.

TECs are sold as “potted” or unpotted. “Potted” means that the TEC’s insides are sealed with something like high temp silicone or epoxy. This is done to ensure that water does not condense inside it. Best to get a potted TEC. 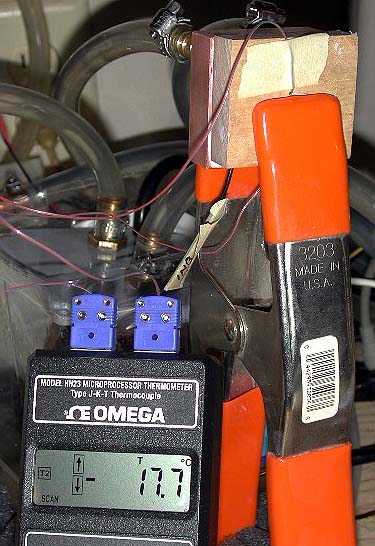 I tested each TEC using water cooling to dampen hot side temps. I used a Danger Den copper waterblock and Cooling Cube with a Danner 1.5 submersible pump (you can see it in the background). Temps were measured with the Omega HH23 Digital Thermometer using thermocouples placed in the base of the waterblock, to measure TEC hot side temp, and directly on the TEC’s cold side. I drilled a small hole in a wood block, inserted the thermocouple and clamped it to the TEC. Thermal grease was used between the TEC and the waterblock.

No Load Delta is the temp difference between the hot and cold sides without a load. Note that these TECs no-load spec ratings are around 65 C; actual performance under these conditions is well under that. What each TEC will deliver in CPU cooling performance depends on how many watts the CPU is throwing off under load.

The last row shows what to expect (theoretically) when a CPU radiating 65 watts is applied to the TEC. To do that, I calculated expected cooling from the following formula:

For example, the 156 watt TEC can cool a CPU with ambient at 25 C as follows:

With an ambient of 25C, the TEC theoretically will cool the CPU to -3.3 C. The actual temp will depend on how well it’s insulated, power supply amperage, etc. We also took some shortcuts by using the TEC’s spec rating, so actual will be somewhat less. Looking at the theoretical temps in the table, I doubt any of the 70-80 watt TECs will deliver any cooling performance under load.

A TEC’s specs are just the beginning; actual CPU cooling performance depends on many factors. Lots of folks are surprised when they try an air-cooled TEC on their T-Birds. Considering the heat load, most are lucky they don’t fry their CPUs. Intel CPUs are much more likely to benefit from TEC cooling due to their substantially lower heat loads.

The only way to get any kind of cooling with high wattage CPUs is to go for more powerful TECs like the 156 watt unit. TECs of similar ratings perform at about the same level, so in purchasing I would buy on price and look for a potted unit.

The 156 watt TE Distributing TEC was purchased from
BE Cooling

Links to almost everything about Peltiers – A must!

SUMMARY: Using peltiers to cool Socket A CPUs may be an exercise in futility.

In Part I of this article, I tried out a bunch of TECs to see how they perform as we might use them. The only one that had some promise for Socket A cooling was a 156 watt 15.8 volt unit. I estimated that it potentially could cool a 65 watt CPU about 28 C below ambient. As we all know, the gap between theory and reality is sometimes pretty wide – this case is no exception.

Lacking detailed performance curves for this particular TEC, the estimate had a lot of “windage” – the estimate of -3.3 C was on the high side. 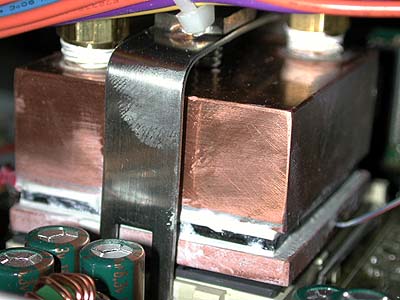 The 156 watt TEC – an “open air” test setup; the wire coming off the cold plate is the thermocouple; Danger Den waterblock.

To get an idea of what might be achievable, I mounted the TEC on a T-Bird 750 running at 1080 MHz, 1.85 volts, cooling the TEC with water. This CPU radiates 64.5 watts under load, so it’s right in the range we calculated in Part I. Note that there is no insulation around the TEC – this results in higher cooling losses, so results in this test are worst case. I was able to get away with this due to very low humidity.

I measured temps with the OMEGA HH23 Digital Thermometer using a thermocouple drilled into the copper cold plate (courtesy of Danger Den. The cold plate fully covered the TEC, so there was no loss there. 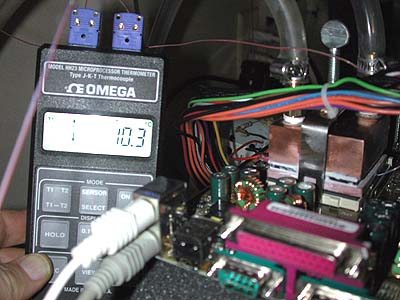 Compared to the theoretical temp of -3.3 C for this setup, there’s about a 15 C difference (I should note that idle temps dropped very rapidly to -6 C and dropping, but idle is not where it’s at). Part of this is due to the lack of insulation, so I would expect maybe 5 C could be gained with proper insulation. Considering everything, if you could get something like 15 – 20 C under ambient with this setup, you would be doing very well. I think this is attainable, but the real question: Is the effort worth it?

This particular CPU could do about 1120 MHz with water cooling, so I did gain some by getting to run a “stable”* 1150 MHz; 1200 MHz was simply NO GO. I could get it to post and run a little at 1200, but not anywhere near stable. Perhaps a higher power TEC would get me there, but it seems like a lot of effort to get marginal gains.

However, I will say that using a TEC of this power with an Intel CPU could be really interesting. Radiating about half the power compared to an AMD CPU, hitting temps below 0 C is quite probable, with some substantial speed gains for the effort.

I still feel that the best price/performance with Socket A CPUs is either incredibly good air cooling or water cooling. Aggressive active cooling with TECs is great fun and necessary to wring out the most performance, but it’s not a practical cooling solution. If you’re tempted to buy an off-the-shelf peltier cooler for your Socket A CPU, don’t bother – it’s not going to work.

*I only ran Prime95 for about 30 minutes – not really enough to call it stable.