I have my watercooling system for more than two months now. The detailed description of this system can be seen in an article titled “Simple Watercooling System”. Briefly, it is an open (no-pressure) system with two waterblocks, for CPU and TNT2 video chip. I did not have any problems at all since the first day I have completed it. There are few troubles I could think of that are possible with this kind of cooling:

Water leaks are not very likely to happen if one uses good quality tubes and seals everything well at the very beginning. Since there is no pressure in the system, if it does not leak during the test run it will probably stay watertight for a long time.

I have read an article about corrosion on overclockers.com, and have thought about it. Since the waterblocks I use are made of copper (unlike the one mentioned in the article, which was made of aluminum) I came to a conclusion that there will be no trouble with corrosion.

Radiator fan breakdown could happen after a long time operation, but I consider this the least dangerous problem of all. Since there is about three quarts of water in the system, the computer could work for hours without the significant rise in CPU temperature. The fan is clearly visible and easy to be replaced.

Water pump breakdown is the last but not nearly the easiest problem I could think of. As far as I know, there is one way of monitoring the pump operation and that is with a flow meter. Since it is complicated and expensive device to be used for this purpose, one has to rely upon CPU temperature monitoring.

My system was tested for this problem and the results were not too satisfactory – 4 minutes 20 seconds after the pump has been switched off, the temperature of the CPU at full load jumped from 30°C to 70°C and continued to rise. This is not a big problem if you are close to the computer and hear the alarm, but becomes a huge one if you are away from it. Sometimes it could end with the total CPU destruction.

After taking into consideration everything I have previously mentioned, I decided to make an add-on to the system that is supposed to at least contribute to the survival of the CPU. I am sure that a lot of people were thinking about adding a cooler over the waterblock, but I have never seen an article on this. I have tried to make this as simple as I could, so I have used the parts already in service or possession. 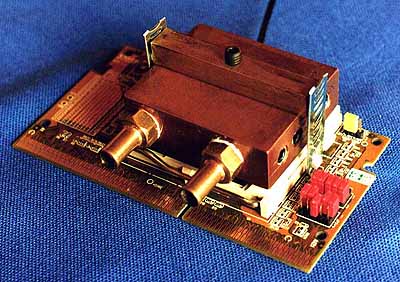 The mounting of the waterblock to the Slot1/Socket370 adapter is shown above. The waterblock was turned in the opposite direction by mistake during the photo session – the nipples should be facing away from the Slot1 connector. It is obvious that the brass holder with clips could be used to press one cooler against the waterblock, keeping them both in firm contact with the CPU.

I have used an old cooler which had to be adapted for this purpose – two rows of fins in the middle had to be broken. Brass mounting was tightened after a thin film of thermal grease has been applied to both CPU and cooler. The only thing left to do was putting the fan on top of everything and the setup was ready for testing, as shown below. 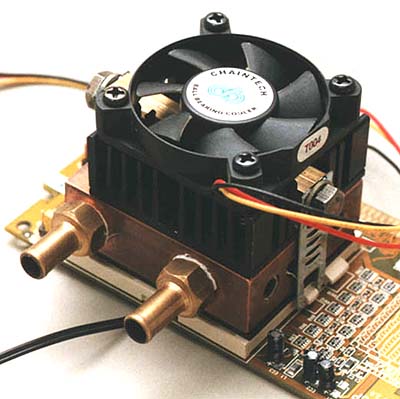 The test has surprised me a lot – this setup with the pump turned off worked much better than the plain air cooling (without the waterblock underneath) with the same cooler. I waited for the CPU temperature to come down to 30°C, started a CPU load utility and turned off the pump.

The temperature was rising fast at first but slowed down after a while and stopped at 69°C! I have left this test running for exactly an hour and the maximum temperature varied between 68°C and 69°C. It was obvious that it would not go any higher, so I tried the next test.

I am not very found of the Quake-like games, but I consider them a good stress test for both video adapter and CPU. Since my Viper770 is now water-cooled, I had to put one small fan underneath the TNT2 waterblock to prevent it from overheating. I did not overclock the chip and memory as usual hoping that this way of secondary cooling would be sufficient. And it was!

I was playing Quake 3 for exactly an hour and everything went perfectly. After exiting the game, I was amazed to see that the temperature has actually dropped to 62°C. Then I was sure that the computer would go on working like this for a long time. Of course, this does not apply for the systems with Peltier elements.

After resting the CPU for a while at idle, the temperature came down to 34° C and stayed that way. Just for the record, room temperature was 20°C. Whole duration of the test is shown on the graph. 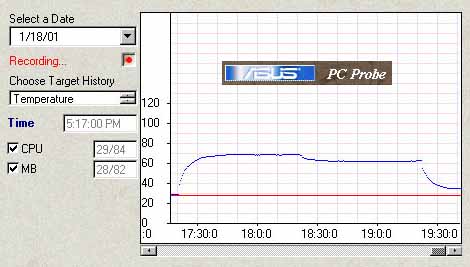 I am still not sure why the test came out so well. The same cooler without the waterblock would let the CPU to heat up over 85°C. Maybe there is a little flow of water due to a temperature difference between the waterblock and the reservoir, but this is very unlikely because the CPU is the highest spot in the system. I would appreciate all comments on this.