Fitting a watercooler into a shoebox – Joe

As soon as I saw Shuttle’s SS50 “Toaster”, in the back of my mind was a challenge – how could I watercool this diminutive PC? Externally watercooling it is relatively easy, but keeping al the components inside the “Toaster” would be an interesting exercise. I had made some Cooling Hacks to the Shuttle earlier, but these were minor compared to this task. 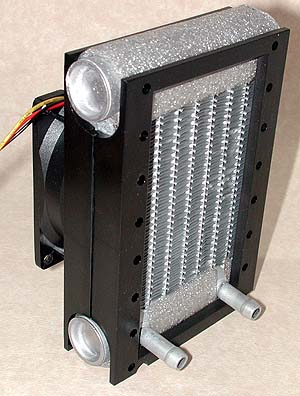 I measured it and saw that it could fit the “Toaster”, although with some minor mods – I moved the fan around so that the nipples faced into the PC and the fan pulls air through the radiator, acting as an exhaust fan. I had to cut some notches into the black plastic frame to clear a couple of obstructions, but these were minor.

The other crucial element was the waterpump. I rummaged around the parts inventory and found a small 12 volt waterpump: 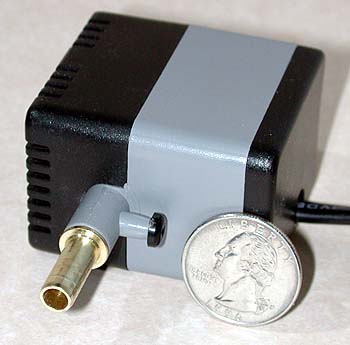 Now let me say straight out that this pump is underpowered and noisy, but for “proof of concept”, it would do. The problem with this pump is that it’s designed for use in a reservoir. The challenge was to make a reservoir small to fit the Shuttle’s tight dimensions.

What I finally decided to do was turn the pump’s base into a reservoir. 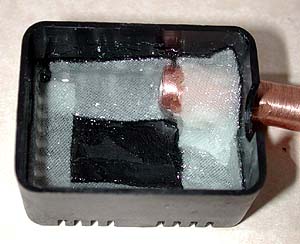 I did the by drilling a hole for a ¼” copper tube and epoxying the intake holes in the base to make it watertight. I used cotton cloth saturated with five minute epoxy to seal the holes in the pumps base plate. I was careful to ensure that everything cleared before gluing up. I then mated the two 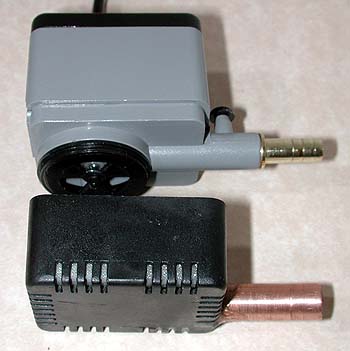 by epoxying the base to the pump: 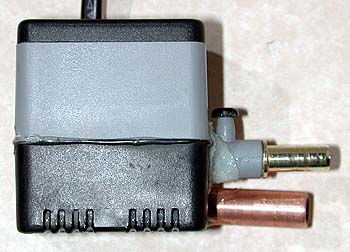 I also added some cloth around the pump’s intake to ensure a watertight bond. I ran the pump for about four hours to ensure that it was watertight.
{mospagebreak}

I used the Koolance CP-200G waterblock – very easy to mount and a good performer. One challenge I had not fully anticipated was how to run the tubing. Because everything is so space constrained, a lot of thought has to go into placing the tubing so that it does not kink: 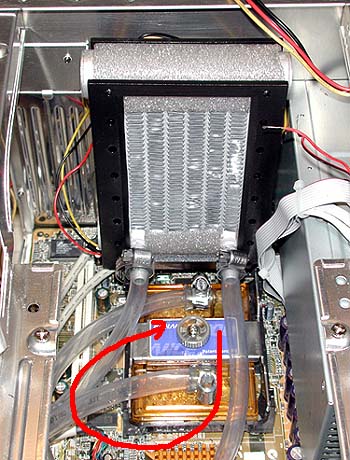 The red arrow shows how I connected the two closest nipples – with a long tubing loop that ensures no sharp bends. I avoided using anything like 90 degree elbows as they add more resistance to the system. This pump is very low flow – I’d be surprised if it did more than 15 gph.

Looking from the side 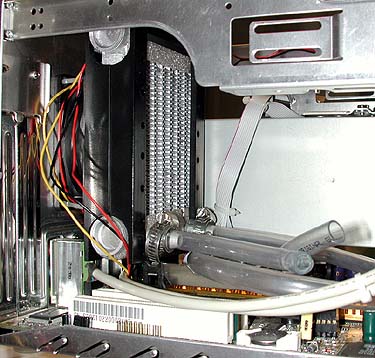 you can see that all the fittings have to be low; there is really no other way, as clearance for the CD ROM preclude mounting any other way. With the pump installed 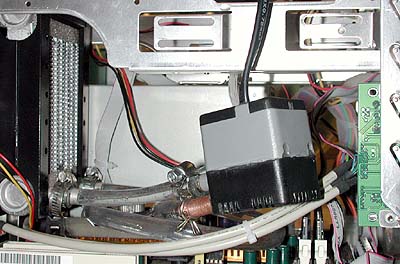 you can see that there’s very little room left. In this installation, the pump just about precludes a large PCI card; there are some other potential locations towards the front left of the box that might work also.

One task that took some time was purging air from the system. A closed loop system is more difficult as there is no reservoir. Normally, I would install a “T” at the intake side of the pump; this allows you to fill the system and purge air very easily, and gives a visual “sight tube” so you can check how much water is in the system (looking back at it now, I should have cut a “T” into the copper tube I epoxied to the base).

In this installation, adding a ¼” “T” would take up too much space. I think the best approach would be to make a “T” from copper tubing, but for this project, I elected to carefully fill and purge instead. Longer term, I would add the “T”.

With all the components installed 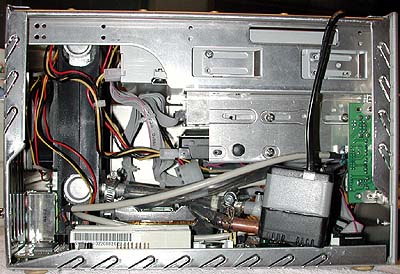 the pump just fits between the drive cage and side panel. It all fit with very little room to spare.

I cranked it up to see how well this install would cool. With an ambient temp around 19 C, I saw P4 diode temps (1.6A @ stock) during normal use ranging from 32-35 C. Running Prime 95, temps hit 39 C. Noise was not excessive as the fan used is a low noise (about 2000 rpm) unit. I found it a tad quieter than aircooled, although the pump’s incessant ticking obviated any noise benefit.

All told, internally watercooling Shuttle’s Toaster is possible – I think the major challenge is finding a pump that’s small enough to fit and powerful enough to make a difference compared to aircooling. If anyone has a similar story, I’d love to post it!

The good guys at UniQpc.com were nice enough to send Shuttle’s AMD version (SN41G2) to test out, and perhaps a version 2 would be appropriate – stay tuned!