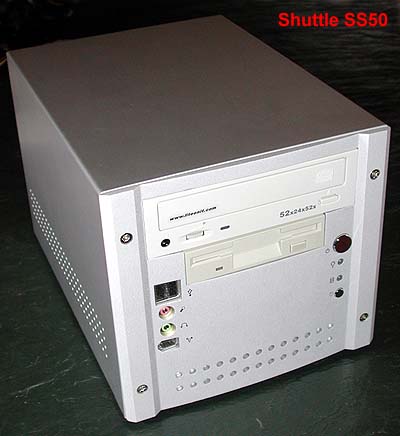 Small form factor PCs are showing up on the scene – these feature cases about the size of a toaster. Brett had one that he was selling, so I decided to buy it to use in Europe (I prefer this to a portable – I can change things easily and hack it). It’s small enough to easily carry on board a plane, assuming you have a screen to use.

I am very impressed with the Shuttle FS50 – in addition to the usual standards, it features integrated

Note the TV-Outs – it is possible to use a TV for the screen (in a pinch). Note that there are only two PCI slots available, but with all that’s integrated, the only thing I’ll add is a modem¹ (for “casual” overseas use). If you want detailed specs, there are links at the end of this article. In addition, there are reviews including benchmarks available – Michael at Lost Circuits has (as usual) a particularly good one HERE.

Now before you get the impression that this is a love fest, let’s get back to reality; the Shuttle FS50 is a mini-system that is somewhat limited in performance. For example, the integrated video uses a chunk of DDR memory, so don’t expect record breaking performance. Then again, it’s not built for that, but it does quite well, all things considered.

However, in use it was obvious that the case needed to breathe more – CPU temps (P4 diode) hovered in the low 40s and the power supply fan was exhausting very warm air. Note that the PS is small – 160 watts; no doubt under stress it’s pushed closer to its limit than typical 300 – 400 watt units.

I think there are two areas that can be improved:

Fist off, don’t get fooled by the vent holes in the front – they are decorations – they are NOT drilled through. It looks like you can disassemble the case and drill them through, if you’re so inclined (I was not). The case intakes air through four rows of holes drilled into each side of the cover.

There is only one case fan, and it’s used to cool the Shuttle P4H Heatpipe, which I reviewed and found to be quite good. The heatpipe is an option; the PC is shipped with an aircooled heatsink and rear exhaust fan that can be temp controlled by BIOS.

Controlling fan speed in BIOS can be an OK option – it works by monitoring CPU temps. You set a temp at which the fan will kick up to full on. For example, the Sunon fan that came with the heatpipe starts up at about 1800 rpm, then at full on it hits about 3500 rpm – big noise difference.

One of my objectives was to find a quieter alternative, so after trying a bunch of 80 and 92mm fans, I settled on the Vantec ThermoFlow 80mm Temperature Controlled Fan, which I found to be quieter; not a surprise, because it starts at about 1800 rpm. I feel this is a better option because the ThermoFlow will vary proportionately with case temps, while the BIOS option will not.

In addition, if you look at the rear of the case 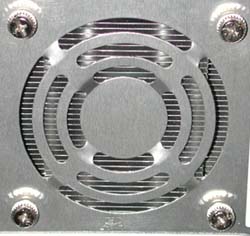 you’ll note that the fan grill is part of the case; as such, it’s really made for an exhaust fan that sits flush to the case. Because the heatpipe radiator is NOT a fan, airflow is restricted by this grill, more than I’d like to see. So the next step was to cut the grill out with a tin snips (very easy) and use a wire grill instead:

This lowered noise a bit and increased case flow – I think it looks nicer: 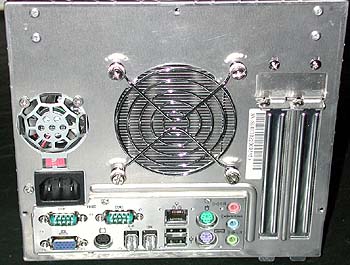 However, the case was still on the warm side. The culprit was NOT CPU heat, but waste heat from the power supply.

¹There are 2 PCI slots, but due to clearances, only one is really usable.

The PS is NOT standard – it’s longer and narrower than a standard ATX PS: 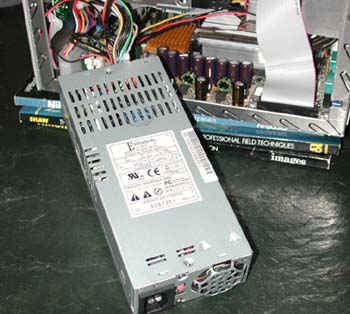 Another observation: In what I think is a VERY dumb design, the PS vents you see face the side of the case – there’s very little air space for these vents, and as a consequence, I think the PS gets warmer than it should. This, in turn, heats up the case interior. Taking the PS cover off (not that easy and totally voids the warranty) 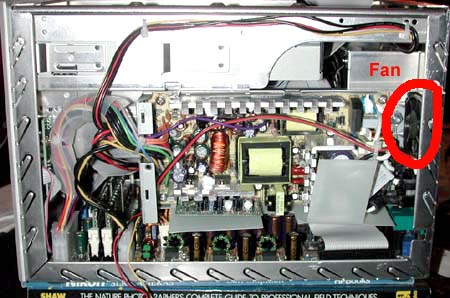 I found that the only place you could place an additional fan was about where the vents were on the PS. I first tried a 60mm: 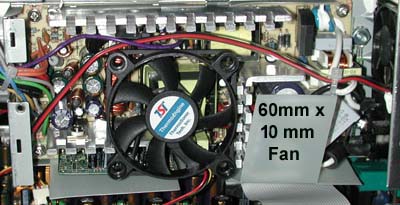 The 60 mm fan option fit OK, but the problem was that it sat too high above the cover so that, if installed, the PC’s case would not fit over it. I thought about rotating the PS 180 degrees so that the vents faced INTO the case. The problem here is that the rear cutout for the PS would need a major hack – the PS cutout must be enlarged, new screw holes drilled, etc. I was not in the mood for this, although it appears possible.

I tried a 50mm fan with more success: 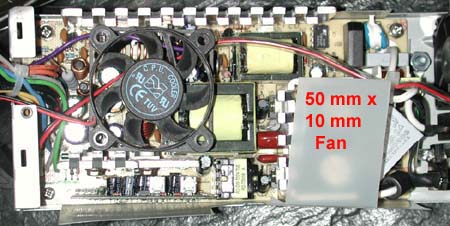 If fit nice and snug (you don’t have to screw it to anything). Note that the fan power plug is led out of the PS to a nearby fan header on the motherboard. However, the cover was not designed for this fan, so I had to cut an opening for it to breathe:

Not pretty – I need to buy a 50mm metal hole cutter to finish the job. The last step is to locate where the fan sits next to the cover and drill more vent holes for airflow. I have not done this yet, but this is no big deal.

The net result of these changes was about a 3-4 C drop in CPU temps (using a P4 1.6A) with a noticeably quieter PC (although still noisy by watercooling standards). Overall, I’m very pleased with the changes. These are not hard to do – cutting out the rear fan grill is a no brainer.

I’m going to play with this some more, as time permits, and see what else can be done.
{mospagebreak}

The SS50 is available from Directron.

For more details on the SS50:

Being snowed in has some advantages – frees up time to play. As I looked at the Shuttle, I decided to get more aggressive – I wanted to cut an intake hole in the case’s front. To do this, I had to strip everything out of the case: 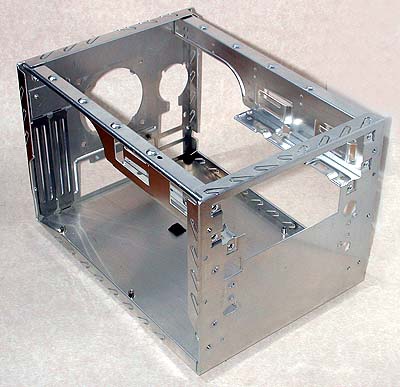 The frame is aluminum and VERY light – I didn’t weigh it, but if it tips a pound, I’d be surprised. One nice thing about thin aluminum – it’s very easy to cut. I used a 51mm/2″ metal hole saw and cut the thin case metal. I then went to work on the front piece. It’s held in place by four allen screws and comes right off.

However, in the middle, it’s about 6mm/7/32″ thick – the front piece is an aluminum casting. I used the metal hole saw on a drill press (slow speed) and proceeded. Folks, this is no easy task! Unless you are really determined to do this and very skilled, I recommend NOT attempting this cut.

I found it slow going (understandable, due to thickness) and the resulting cut was not smooth. I used an abrasive wheel and a Dremel to smooth out the edges. I also found that even though I clamped the work, it scuffed the front finish: 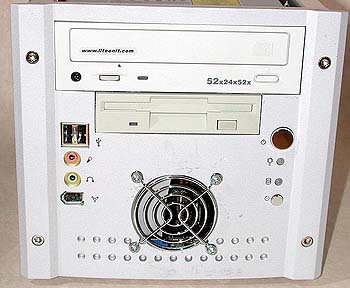 I used a 60mm fan grill and screwed it to the case front. I also ground the screws down so it would fit flush against the case. If I had to do this over again, I would not cut the front, but cut a hole in the front side of the case for airflow. This would be a much easier task and accomplish the same thing.

The last thing I did was re cut the power supply fan opening with the metal home saw – looks a bit nicer: 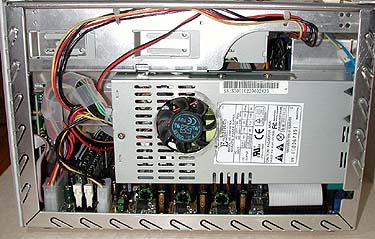 I’m still debating how to best open up the side of the case, where the PS fan sits, to allow for sufficient airflow for the fan (I’m running it at 7 volts – cuts the noise).

One way is to drill a series of holes about the same size as the ones in the side now, something like a radial pattern. My preferred approach would be to cut a 51mm/2″ hole in the side and bolt a 60mm fan grill over it; the problem is that the clearances are so tight that the screws would interfere with the cover’s fit over the case.

I could grind them down, but the metal is so thin, there won’t be anything left to hold the grill in place. I thought about epoxying the grill in place, but am not sure it will do the job – have to do some experimenting first. 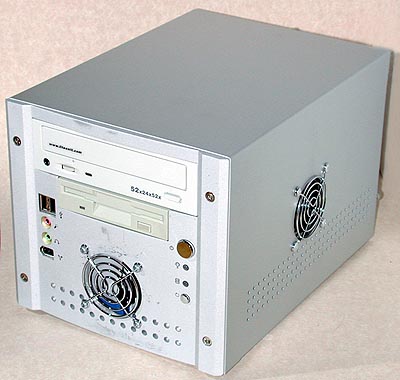 After writing about my pondering how to attach a grill to the side of the case, Dean and Owen emailed me suggesting I use pop-rivets (Some other ideas: Erg – Glue on a grill; Grey – bolt on and grind bolts flush to the nuts; Michael – punch holes, screw and epoxy). I have not used these before but thought this was an excellent idea, so I popped down to the local hardware store and picked up a pop-rivet kit for $12 (Owen Stevens sent a link to one at SEARS).

Pop-rivets are an easy way to bind two surfaces together and only requires that you drill a hole for the rivet. 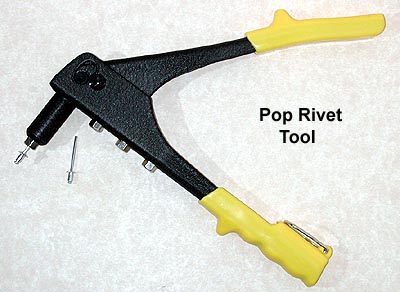 looks like a pliers – the way it works is that you insert the rivet into it and squeeze the handle; this pulls the pin up and, in the process, deforms the end of the rivet so that it’s larger than the hole you inserted it into. When finished, the rivet holds the two pieces together. 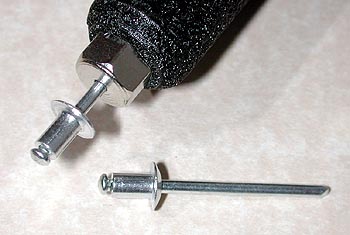 I found that the resulting rivet left a little stem on the inside of the cover; I ground some of it off (you can also hammer it flat – maybe a better approach – but carefully to avoid denting and scuffing), but you can’t really make it flush to the case – if you do, the rivet looses its grip and will fall out (I’ve ground off rivets this way). 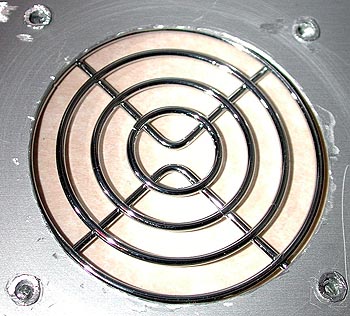 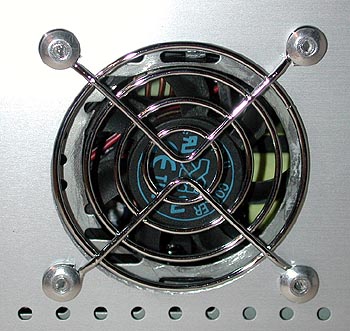 The fan is the one I placed inside the power supply.

All told, if you’re thinking of enhancing the “toaster’s” cooling, I think the easiest mod is to cut a 2″ hole in one side – the front mod is much more difficult.

“A silent, reliable source of power suitable for use in an overclocked environment” – Tom Akita

Yet another Internet pricing error, yet another tumult. This time around, Best Buy erroneously listed a $400 video card for $130. I’m going to give those who feel horribly injured by this a chance to speak. Be forewarned that you’ll

SUMMARY: Surge suppressors can turn into unprotected power strips, and you’ll never know it. I was talking with Brett, my EE pal, and somehow we got to surge protectors. Brett casually says something like “…and of course you know that