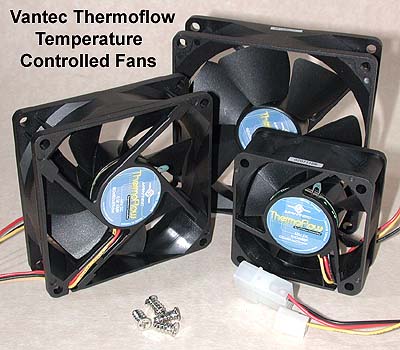 The fans feature a four pin connector, separate tach input and four screws to bolt on a grill.

The good guys at Vantec sent along some samples of their ThermoFlow Temperature Controlled Fans. They come in four sizes – 60, 80, 92 and 120 mm (I did not have the 120mm to test).

Temperature controlled fans are being used more and more as consumers attempt to moderate noise and heat. If a PC is at idle and not throwing off a lot of heat, it makes senses to tie fan rpms to heat – low heat, low rpms, high heat, high rpms. The problem I have noticed on some units is that the temperature range is too wide – I’ve seen it as wide as 25 – 75 C.

Ranges this wide are usually (should be?) outside of what I would consider useful. If you have temps around 75 C, things are too hot to begin with! The Vantec fans feature a range of 25 – 50 C, I think better for PC use. 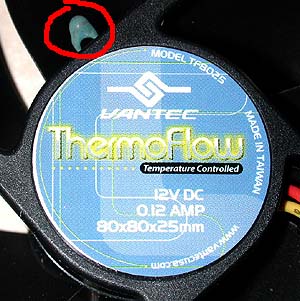 The thermistor which controls temps is located in each fan’s hub on the exhaust side. If you’re adventurous, cutting the thermistor off and soldering extension wires could be interesting. 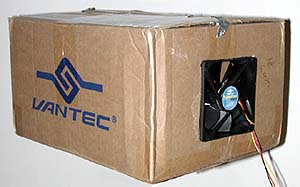 I took a cardboard box (fittingly, one from Vantec), cut a hole for the fan in one side and a hole to poke a hairdryer in the other. I measured temps at the fan’s exit and recorded cfms with a digital tachometer, removing the hairdryer each time so rpms were not impacted by the blast from the hairdryer.

The Vantec ThermoFlow Temperature Controlled Fans delivered pretty much as specified. If you’re looking to moderate fan noise (good ones for a power supply), the Vantec’s relatively narrow temp range (25 – 50 C) are worth a look.