Does it make a waterblock better?–Joe

I sent the silver plate back to Rick Milano and he returned it after lapping it flat. I retested on a Duron 800 @ 1000 MHz, 1.91 volts, using the silver and copper plates between a BE Cooling copper waterblock to see how much of a difference the silver plate would make. I ran both for one hour with Prime 95, then recorded temps:

Not much of a difference – the Deltas are not statistically significant, although the CPU back temps are. This test is inconclusive, so I ratcheted up the test using a static test block. I maxed out the power supply and tested the exact same setup at 138 watts:

Now we can see some differences, although in the scheme of things, it’s relatively minor: 1.6 C at the waterblock’s base.

Silver is a better thermal conductor than copper; as the table below shows, it’s about 5% better. Consistent with this difference, test results show a minimal gain. Considering the relative cost differential between the two materials, I don’t think the gain is cost justified, although some may consider it performance justified.

SUMMARY 8/27/01: A warped silver plate performs as well as copper – how much better will a flat one do? 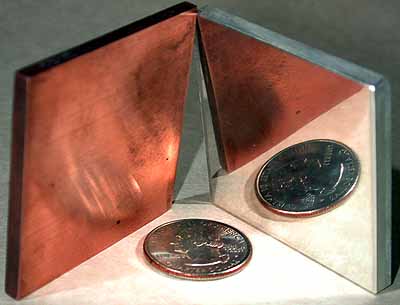 There has been lots of interest lately in silver as a better material for heatsinks due to its higher thermal conductivity. Below is how much better silver is as a conductor than copper:

Rick Milano contacted me about some products he is planning to market, among them is a 3/16″ thick solid silver plate. He asked me to test it out to see how it compares to a similar copper plate. He sent me one to test out.

I decided to test it by mounting each plate to a copper water block. I then mounted this assembly onto a T-Bird running 1397 @ 1.98 volts (99 watts). I recorded temps of the waterblock (thermocouple mounted above the CPU core), CPU back and air at the radiator’s intake.

Looking at this, you might conclude there is no difference. However, what bothered me is the different CPU back temps – over 11 C higher for Silver than copper. Something is not right.

I then took a closer look at the Silver block and found that it was not perfectly flat; it was warped enough that it did not contact the waterblock as fully as the copper block – just enough to throw off the results.

The jury is still out – this is not an apples-to-apples test. Even warped, silver pulled even with copper, suggesting that better performance may be possible. However, whether 5% (or more?) better is noticeable and worth 100 times the cost is debatable.

Rick is sending me a lapped silver plate to test, so stay tuned.

SUMMARY: Probably the first of many 80 mm “fandapter” heatsinks. The stock fan does not cut it for Socket A, but a Panaflo gets it into acceptable territory. Well what have we here? A 60mm on steroids? No – it’s