SUMMARY: Although not for general P4 use, a good heatpipe CPU cooler. 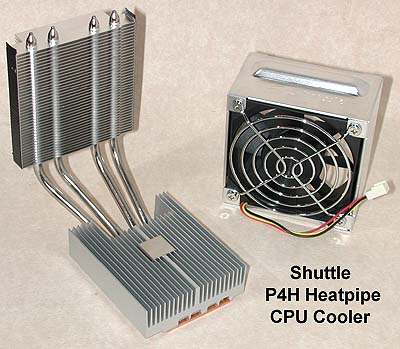 A friend (Brett) dropped by for a chat and brought over Shuttle’s PH4 Heat-Pipe. This is designed for use in Shuttle’s small form factor systems (Model #s SS50C, SS51G, SV51F and SB51G), and as such is NOT necessarily suitable for general P4 use. Two factors limit its use:

I should also note that the fan wire is very short – you might need to lengthen it. Shuttle is selling these for $39.

The fan assembly slips over the fins: 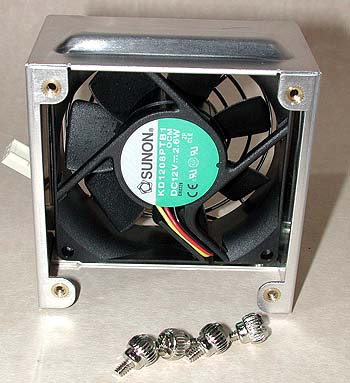 The four knurled screws are to mount the fan to Shuttle’s chassis – to adapt it, you would need to design a different method; it should not be too difficult. 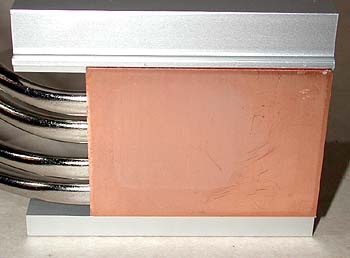 Affixed to it is an aluminum finned top piece. I’m sure it adds to the cooling – good airflow over these fins may increase performance a bit. The heatpipes have a liberal application of thermal grease to enhance heat transfer.

The clip is a good one: 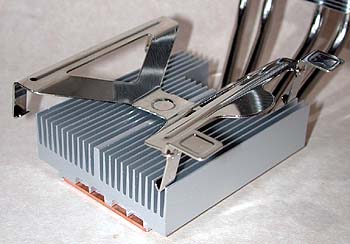 Overall, the build quality is a step above other heatpipes I have seen and has a very sharp appearance.

I tested the Shuttle P4H on an Acorp 4S845A motherboard with a modified P4 1500 to read CPU case temps.

This is the best performing heatpipe I’ve tested to date. I’m sure if you were to use a higher cfm fan, performance would improve, but at the expense of noise. As it is, it could be a very interesting conversation piece and decent for CPU cooling.

Thanks again to Brett for bringing this over to test out.