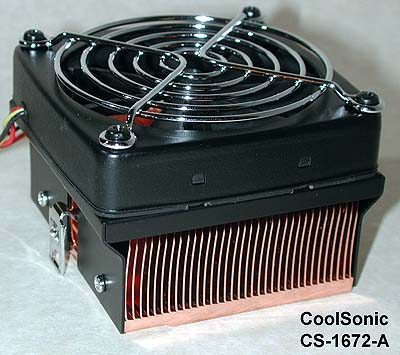 The kind folks at CoolSonic were nice enough to send a sample of their heatsink, the Model #CS-1672-A. This is a copper skived unit with a YS Tech TMD fan (note that this fan features a plastic shroud which avoids any potential shorting issues). Skived heatsinks shave the fins from the copper base so there is no thermal interface between the fins and base – more efficient. 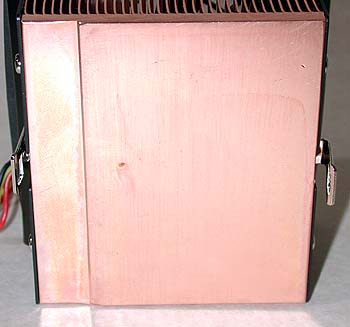 When I ran my nail over it, I could not feel or hear ridges.

The clip engages one socket lug and requires a screwdriver to mount. The slot for the blade is not too wide, so care must be used to avoid the tip slipping out while mounting.

In summary, a copper skived heatsink with a secure clip .

The CoolSonic CS-1672-A was first tested on the CPU Die Simulator which gives results that are unaffected by motherboard influences. I then tested it on a Shuttle AK31, modified to read AMD’s on-die diode, as an example of what users might see on their systems.

The CoolSonic CS-1672-A does an OK cooling job with tolerable noise levels.

Thanks again to CoolSonic for sending this our way. Interested distributors may contact them at 886-2-8688-1795 (Taipei Hsien) or by emailing CoolSonic.

Improving The Cooling On The Asus Z71V & A

SUMMARY: I tested one of the first Glaciators off the line – Impressive performance at reasonable noise levels. Millenium’s Glaciator has finally made it to production; as many of you know, Millenium Thermal Solutions came up with a heatsink design