Shuttle uses Intel’s Atom 330 for a touch screen PC while Microsoft sees netbooks at $200 by year-end. 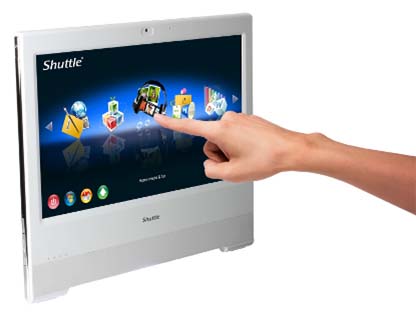 Shuttle’s All-In-One PC is notable both for its  CPU – Intel’s dual core Atom 330 – and its price – expected to be about $500.Key features include:

This is one of the first Atom 330 PCs to be announced and it’s interesting to see that the OS will be XP – still alive and kicking!

As I look at this product, I think it’s a preview of what’s possible with an Atom 330 netbook using Windows 7. Microsoft’s Mark Croft, Director of OEM Marketing, expects to see netbooks coming to market at a $200 price point. This suggests that emasculated Windows 7 will be priced comparable to XP’s netbook price.

Windows 7 should be available to OEMs around mid-year, so expect to see more powerful netbooks shipping with Windows 7 available for the Christmas push. It would seem that by using Windows 7, OEMs are less constrained by Microsoft’s netbook-XP policies, although how Intel might respond to the Atom 330 showing up in netbooks is a bit of an unknown.

At the beginning of this year, I thought this whole DDR thing would be a nightmare. I was wrong; it’s been worse. I expected Bozo the Clown, instead I’m getting Waiting for Godot. You buy an AMD DDR board, you’ll

This article is a compilation of my thoughts on all the games I purchased in 2007. There are a few good titles missing, namely Call of Duty 4 and Bioshock. But I presently play COD4 on the PS3 and after