As of May 2017 Noctua released its NF-A20 fan as the NF-A20 FLX two-speed fan and the NF-A20 PWM variable speed fan. Noctua has been working on a 200 mm fan for years – it first showed a 20 cm prototype in 2013 at Computex, so this month will be exactly four years. They had to have been working on it before that, to make a prototype, but only now has Noctua released their 200 mm fan. As their press relations person said, “We really had to put our backs into this one to make it happen. It’s so easy to build a 200mm fan that spins, but so hard to build one that performs, doesn’t feel flimsy, and will spin for more than 10 years…” Were the results worth it? Let’s see!

Noctua is a “cooperation” of the Austrian firm Rascom Computer Distribution with the Taiwanese cooling specialist Kolink International Corporation. Noctua operates as a joint venture between Kolink and Rascom. They have been delighting computer enthusiasts since 2005 with their high quality products. Whatever their legal status, Noctua equipment is shipped from Rascom in Austria. “Noctua” literally means nightbird in Latin. Since there is an owl in Noctua’s logo, you will expect them to focus on quiet air-cooling.

About the Noctua NF-A20

Who needs a 200 mm fan? There are a few computer cases that need 200 mm fans. But those are a minority of cases. I put that question to Noctua. Their spokesman said,

We do expect the NF-A20 to become popular among our non-PC clients as well and have already received numerous inquiries after launching it. At the moment, many industrial clients in fields such as building ventilation or green walls use our 140mm models and we expect some of them to get even better results (performance/noise, performance/watt, etc.) by switching to the A20.

[W]e have already got an enquiry from a company that is currently using several hundred fans of this size for ventilating a data center. Since our NF-A20 is much more power efficient than the model they are currently using, switching to the NF-A20 will allow them to save several hundred dollars of electricity per day!

More on the NF-A20 from Noctua:

With the 20cm NF-A20, Noctua’s biggest fan yet, the key challenge was that the mass of the impeller is about four times greater than that of 12 or 14cm fans and thus creates a significantly higher load on the bearing. In the end, the difficulties were overcome by increasing the diameter of the axis and the bearing from 3mm to 4mm in order to distribute the load over a larger bearing surface, as well as by using a new fibreglass reinforced polypropylene (PP) material, which reduces the mass of the impeller by 26% as compared to Noctua’s standard fibreglass reinforced PBT material.

As for the screw-holes of the NF-A20, Noctua says this in their installation guide (available online):

In order to ensure broad compatibility with today’s PC cases, the NF-A20 PWM features three sets of mounting holes: While the 154x154mm and 110x180mm spacing allow it to replace most 200mm fans, the 170x170mm spacing is used by many 230mm and 250mm fans, which can thus also be replaced by the NF-A20 PWM.

As there is no fixed industry standard for the size or hole spacing of 200mm, 220mm, 230mm or 250mm fans. Please carefully check both the hole setup of your chassis and the available space (the NF-A20 PWM is 30mm thick whereas some other 200mm fans are only 20mm or 25mm!) in order to verify that the NF-A20 PWM is compatible with your chassis.

Features of the NF-A20 (from Noctua’s product page):

The specifications of the FLX and PWM versions of the Noctua NF-A20 are the same:

Less than 1 watt to move such a large fan! This is one very efficient fan.

When you first handle an NF-A20 box you think of pizza. The boxes feel like the boxes that carry pizzas, right down to the corrugated cardboard (recyclable, you see). I have placed a 120 mm NF-P12 in front of one of the boxes so you can see just how big these fans are.

Opening the box gets you Noctua’s installation manual (it is also online here) on top. At the bottom you find the fan snuggled in its recyclable plastic case. Under that is a box of accessories for your particular fan.

The accessories that come with the FLX fans: a package of four standard fan screws, a 3-pin extension line, a 3-pin voltage reducing adapter (contains a resistor but does not get too warm; Noctua calls this a Low Noise Adapter, AN-R13) a 4-pin adapter drawing 12 volts from the PSU, a set of flat-ended vibration-reducing fan mounts and a set of four double-ended vibration-reducing fan mounts. That’s three ways to mount your fan, all included. The installation instructions tell you how to mount these fans into a blind area using the double-ended mounts.

The accessories that come with the PWM fans: a PWM LNA (NA-R6), a Y-cable, a package of four standard fan screws, a PWM extension line, a set of four double-ended vibration-reducing fan mounts, and a set of flat-ended vibration-reducing fan mounts. In one socket of the Y-cable there are three conductors instead of four, so the RPM of only one of the two fans gets sent.

When you take a Noctua NF-A20 out of its box, you are struck by how solid it feels. No flimsy fan, this. Solid frame, solid impeller. Solid. When I put this fan down on the box I used to test 180 mm fans the 170×170 mm screw-holes just fit! But those fans were flimsy compared to these.

Here is a pair of Noctua NF-A20 fans. Aside from the colors, what strikes you that the hub is squared off. This is a characteristic of some very powerful fans. As the Noctua representative said, “It’s just the impeller hub that’s reinforced.”

Close to that hub, we read “SSO2 system with metal bearing shell.” Around the rim, we see that the motor in the center is supported with six struts. The motors of smaller fans are supported by four or even three struts.

A view of the corner confirms what you probably guessed: this is not a big square frame but a round frame with square ears. You can see the vibration absorbing corner pads as well.

The fans were placed in a test stand, where their free air RPM was observed and their noise was assessed. The standard proxy for what you can hear is the Sound Pressure Level (SPL), measured in decibels and given a type A weighting (dBA). A silent room is about 30 dBA.

The ambient noise for this set of testing is 31 dBA. To measure noise levels that were softer, the Sound Pressure Level (SPL) was measured 10 cm from each fan. SPL was adjusted to 1 meter by subtracting 20 dB. The sound pressure meter is a Tenma 72-942. This fan tester has a microphone which is not accurate under 30 dBA. This is the limit of all but the most expensive SPL meters. The NF-A20 fan was tested at 25 cm but the non-LNA results were consistent with the 10 cm results and the meter would not measure low enough to distinguish the fan with its LNA at that distance. Finally, at low levels sound measurement by extrapolation is not accurate, so that sound measurements are approximate.

The airflow was assessed using a standard measure, cubic feet per minute, or CFM. The air entered a sealed 8″x8″x8″ box (200+ mm on a side) where it was allowed to mix. The air left the box through an exhaust port, where it was measured with the vane head of an Extech AN100 anemometer, averaging 10 readings per fan setting. Normally I put a dust filter over a fan, but in this case I did not have 200 mm dust filters. You just get free air.

Results of Testing the Noctua NF-A20

The NF-A20 was tested in pairs, PWM and FLX. But because the data clustered so tightly, the fans are presented as a group of four. How tightly did the fans bunch up? Would you believe 79 to 81.5 CFM without LNA, and 57.5 to 61 CFM with LNA for the four fans? That is very tight. Here is the data shown graphically:

These are with my own equipment, remember. On professional equipment the readings will differ. But this gives you a ballpark estimate. About the sound: this fan makes a soft sound like a breeze in the trees.

How about the PWM? Well, here is the RPM vs PWM signal:

You can see that the PWM controls fanspeed even with the LNA attached. This is not true for a lot of fans. In essence when you buy a Noctua NF-A20 PWM, you’re buying two PWM fans. Also, see how slow these fans can go?

The MSRP from Noctua is:

The NF-A20 is not up on Amazon or Newegg at time of this writing.

These fans took a long time to get right. Noctua should be praised for holding them back until they were this good. These are strongly built fans. Just holding them is a pleasure. In the photographs you can see the struts, but in person the broad blades seem to take up the whole disk. The fans come with a lot of accessories, including enough that you can choose how to fasten your fan. And the many screw-holes will let this fan to go into a large number of settings.

You won’t be able to tell that Noctua used a new material for its impeller: it behaves like a 120 mm or a 140 mm fan. It has none of the pliability you have come to expect in a fan this large. It’s solid and Noctua is keeping the price down to match their other fans. That last is pretty amazing.

At bottom a fan is a fan. It is a rotating device which pushes air. But this moves a lot of air and it does so very quietly and uses less than a watt doing so. The Noctua NF-A20 is not very expensive. It makes me want to go out and get a case that needs 200 mm fans. 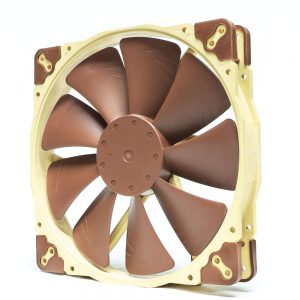 Today we look at the tandem tower Silverstone Heligon HE01. Although this heatsink has been available for a while, it is our first chance to put it to the test. We will first look at the cooling performance of the stock single-fan configuration and then see if this heatsink performs any better with two fans instead of one. Read More

Cooler Master has brought to market their “Fourth Generation Bearing,” a bearing based on POM (polyoxymethylene). So far, they have built three fans with POM bearings. The second fan to use a POM bearing is the Jetflo, the very fan we will be reviewing here. The Jetflo has a number of features that make it an interesting fan indeed. In fact, the POM bearing is just the first of its features. So let us review them all, and put the fan through its paces. Read More

Cryorig has an “ultimate” heatsink for us: the Cryorig R1 Ultimate. This heatsink is full of advanced technology, and it uses two 140 x 25 mm fans and tandem fin-stack towers. Ultimate, indeed. But does all of this give us the ultimate in cooling experience? Only one way to find out. We will explore the heck out of this heatsink. Read More