I’ve been thinking a while about developing a new CPU simulator for CPUs with IHSs and finally made one up. I started with a copper block that weighs about ten pounds and had a 10 x 10 mm die machined in the top, ground flat by local machine shop: 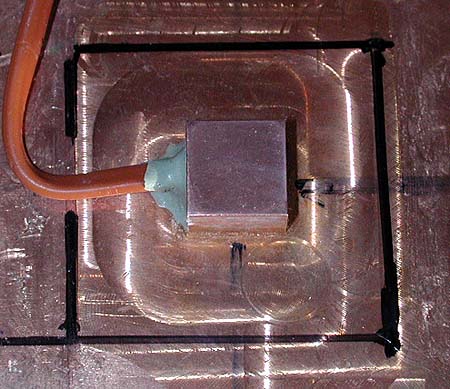 A hole is drilled into the side of the die to mount a thermocouple, held in place with thermal epoxy. I have an Intel IHS that someone sent me from a dead P4. I marked off on the copper block its outlines and proceeded to build a supporting wall to hold the IHS’s edges in place: 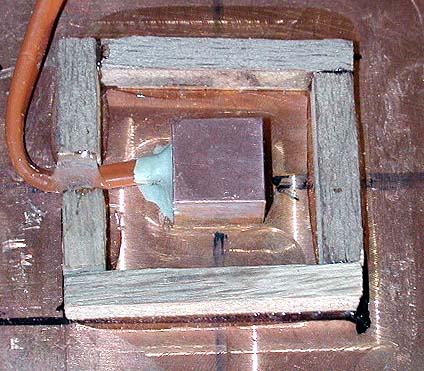 The top of the wall is slightly lower than the edge of the IHS – the gap will be made up by a bead of epoxy when the IHS is epoxied to the die. I used small wood strips for this supporting wall, as I did not want a lot of heat transferred to the edge of the IHS.

Once set, I placed a layer of insulation around the die: 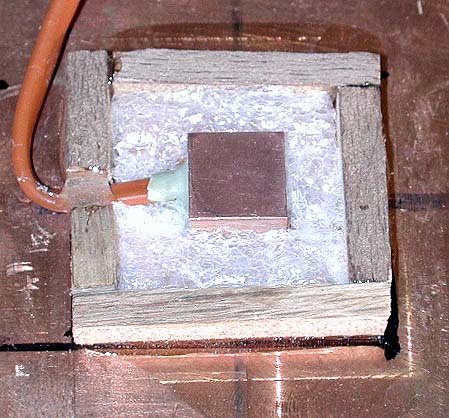 I then thermal epoxied the IHS to the die, laid down a bead of epoxy on the supporting wall, and clamped down of the IHS until the epoxy set. A view with the IHS in place: 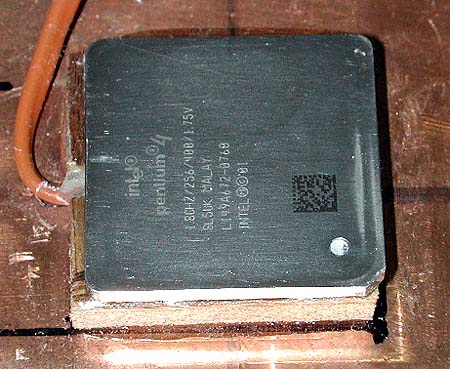 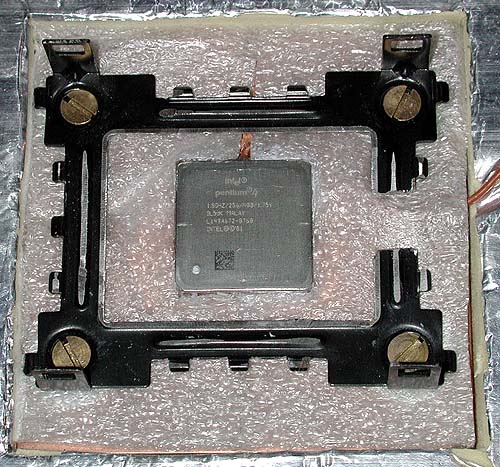 There are four holes bored into the copper block to hold the P4 retention piece – I measured a P4 on a motherboard to determine clearances. I am in the process of testing a number of heatsinks on it to gain some experience with it and will report on results shortly.
{mospagebreak}

One area that I wanted to explore a bit with the P4 CPU Simualator is the temperature dynamic of the IHS. I have seen comments ranging from it does not spread heat to it being iso-thermal.

To explore this, I decided to embed a thermocouple in the small hole that Intel bores in the IHS: 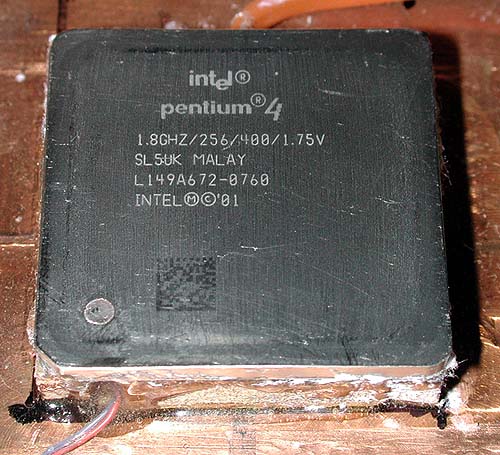 The small dot in the hole is the tip of the thermocouple: 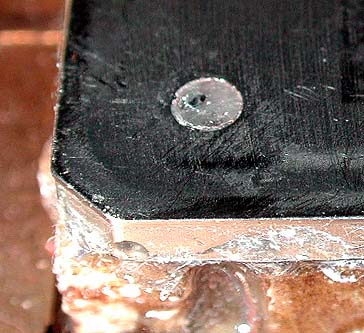 I tested a handful of P4 heatsinks to get some idea of a range of values – results below:

Although a small sample, the data suggests that the ratio between the die will fall in the 0.60 to 0.70 range – certainly not iso-thermal by any means.

While the IHS does spread heat, cooling performance will still depend upon the ability of the heatsink to wick heat from the center of the IHS, above the CPU core. I have some ideas for more tests, so stay tuned.

As a further look into the temperature pattern of the IHS, I bored a small hole in the center of the IHS and inserted a thermocouple into it: 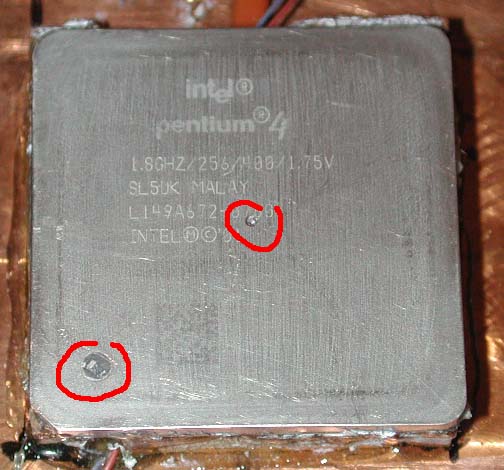 Using the die simulator allows me to see the temp pattern over the IHS with and without a heatsink:

This testing shows that there is indeed heat spreading almost uniformly over the IHS without a heatsink. However, once a heatsink is applied onto the IHS, the temp pattern changes radically. The temp difference between the die and center of the IHS depends upon both the TIM between the IHS and CPU die as well as the effect of the heatsink on the IHS.

As heat is transferred to the heatsink, there is more transfer at the center of the IHS than at the edges (the center is where the heat is being generated). This is reflected in the temp gradient over the IHS – the edges show a lower temp as less heat is being spread to the edges.

The IHS does spread heat, but each heatsink will have somewhat of a different temp pattern depending on its particular design and efficiency, although I suspect the pattern will be roughly similar for active heatsinks.

AMD is saying that triple-core processors will become available the second quarter of 2008. The only problem is AMD said two months ago that they would be out the first quarter of 2008. Here’s the AMD press release announcing just

Getting On The Right Bus

DDR2 will be delayed for about a year, or so the Inquirer says. What does that mean? It’s no big deal to those who can provide true dual DDR systems. It hurts those who can’t. That’s good news for Intel

XBitLabs recently reviewed the upcoming low-end Penryn quad Q9300. They spent more than a bit of time trying to overclock it, and found that they were rather constrained by the chip’s low (7.5X) multiplier and high (333MHz) FSB. Faced with