Over the past few months, there’s been a growing amount of talk that AMD is having this huge surge in demand.

A particularly vehement assertion of this can be found here:

Unfortunately, unless you think there are millions of people who think new motherboards make excellent decorations, there cannot be a big, general surge in AMD motherboard sales unless there is also a surge in AMD CPU sales.

Let’s see what AMD’s market share in x86 processors has been like since the turn of the century (all numbers in percentages from various web articles citing Mercury Research):

We can see a few things:

1) Even compared to its record a few years back, AMD is hardly blowing the doors off Intel at the moment. Even last quarter (which was the best market share quarter in three years) is still significantly less than the market share AMD had in 2001.

If you want to look at unit sales, back in 2001, those were a few hundred thousand north of 8 million CPUs sold per quarter. Unfortunately, these sales levels ended up causing a huge inventory glut, which accounts for the steep decline in market share in 2002.

AMD did not get back to roughly the same unit sales until a few quarters ago. Last quarter, they sold about 8.5 million CPUs. Next quarter is normally the weakest quarter of the year for the CPU industry, so AMD will probably sell about the same number or a little less.

Yes, AMD is doing a little bit better than it did after it took care of its inventory glut, but we’re talking about going from around 15.5% to a bit under 17%.

This is not a surge.

AMD recently had an analyst conference, with lots and lots of slides . A few convey some very interesting information, and we’ll talk about them tomorrow.

For now, though, slide 17 (from the source linked above) is of particular interest: 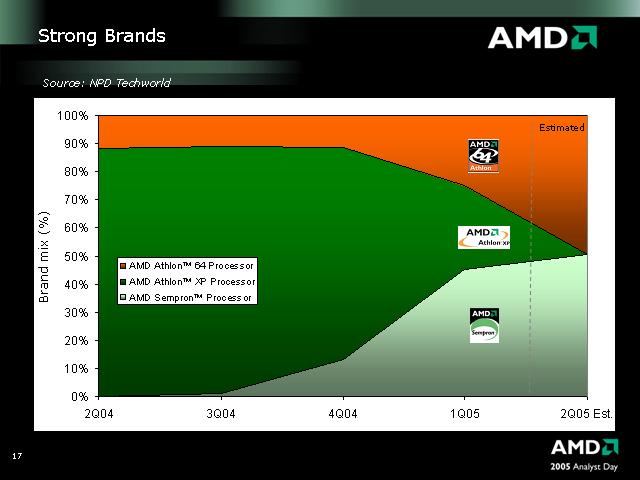 AMD appears to have sold about 8.5 million CPUs the last two quarters (and not much less than that for the quarters covered by the graph).

Plug those numbers into the percentages shown on the graph, and you’ll see that AMD wasn’t selling too many desktop “real” Hammers in 2004. They only sold about a million a quarter, or about 12% of AMD desktop production, and just 2% of the overall PC market.

In the first quarter of 2005, that number went to a little less than 25% of the market, or roughly two million desktop Hammers (plus at least some socket 754 Semprons), or 4% of the PC market.

In the second quarter, that number will roughly double again, to about four million desktop Hammers (plus what will probably be a significant number of socket 754 Semprons), or 8% of the PC market.

This is what is surging, but increased sales aren’t coming out of Intel’s hide, they’re coming from AMD’s (for sure, a good trade). As Hammer sales finally go up, socket A sales go down by roughly as much. Overall AMD sales volumes are just slowly increasing.

Something else that should be kept in mind when looking at the relative share of Intel/AMD mobo made by Taiwanese mobo makers is that AMD doesn’t sell AMD-brand mobos. Intel does, and when it comes to mobos, Intel giveth and Intel taketh away.

Intel doesn’t actually make Intel motherboards. They make the chipsets, but contract out the assembly to companies like Foxconn Electronics, Mitac International, Wistron, and FIC. Last year, Intel apparently signed up Wistron and phased out Asus. Given that the contract with Intel appears to have been for about 15 million mobos (Intel’s total mobo production has to be much bigger than that, Dell alone used 30 million boards last year) half of Asus’ production, and the size of that single order dwarfed the total production of the other “known” Taiwanese mobo makers, it’s not at all surprising to see the Intel market share among those one might ask at a trade show drop quite a bit.

So it is quite possible that the balance of market share among some Taiwanese mobo makers can shift quite a bit without that meaning any real shift in overall sales.

This says it all (emphasis ours):

Sales of servers with AMD’s Opteron processor accounted for 5.7 percent of the 1.6 million unit x86 market. This was a slight improvement from the 5.4 percent market share Opteron held during the previous quarter, but still far from AMD’s stated goal of 12 percent market share by year’s end.

In total, 92,000 Opteron systems shipped during the quarter, led by HP, with just under 12,000 shipments, and Sun, which sold nearly 9,000 Opteron servers. The vast majority of Opteron sales, however, were made by smaller, lesser-known vendors.


5.7 percent. In other words, for every Opteron system sold, the other guy sold seventeen servers.

Even if you cut it down to just x86-64 capable machines, for every Opteron system sold, the other guy sold almost nine. When somebody swears up and down he’s not going to make your kind of product, then changes his mind and takes almost 90% of that market with an inferior product, that’s not exactly something to write home about.

An analyst at Gartner put this well:

“Opteron is still a viable product,” said Joseph Gonzalez, a Gartner analyst. “You can run a lot of your older applications on it. It’s also a little bit lower-priced than some of the Xeon offerings,” he said. “It’s not going to make a huge inroad into Intel’s sales, but it’s going to bring in a lot of revenue for AMD.”

The only huge surge in AMD production has been in hype and spin. That’s been multiplying even faster than Hammer production, and unfortunately, many fall for it.

Yes, AMD is doing better, but the improvement in sales over the past year or so have been modest at best.

Over the next couple quarters, AMD ought to make considerably more money, even with the same CPU volume, simply because the product mix will finally shift decisively from low-priced Athlon XPs to higher-priced Hammers.

(Of course, it remains to be seen whether AMD can sell four or six times as many Hammers for more-or-less the same price as they did six months ago).


Sorry, but there is no general AMD surge. We are in the process of a Hammer surge, but overall AMD has surely not grown to be any more than just a thorn in Intel’s side. Indeed, the thorn is still smaller than it was just four years ago.

But not until then, and most certainly not over a year-to-year blip of less than 2%.

The reality is Intel is holding its own very well despite having a troubled line of desktop/server products plagued by Prescott problems. Intel still managed to sell 15-16 million more desktop CPUs and hundreds of thousands more server CPUs in 2004 without somebody’s seal of approval than they did in 2003 with it. 🙂

Sorry, but these are the cold hard real numbers. These are the numbers that have to change more than a nudge here and there before you can rationally speak about a big AMD surge.

We’re going to see if we can’t make a habit of this. These prices are coming straight from ads, not rumors, hopes or prayers. 🙂 These sales don’t start until Sunday, but most of these places will give you a

Until it is no longer necessary, we’re going to report on the availability of the TBred2 processor. Unless circumstances change, we will focus on the 2400+. Our reference point will be Pricewatch (except where noted). We will also check each

In part one of this piece, we spoke a bit about the differences between Intel and OLPC, both in their organizational attitudes and their machines. However, such differences dwindle down to trivialities compared to the real issue: How much bang