SUMMARY: One of the “Slim Jims” of pen drives.

I received a number of emails regarding the size of the Memorex 1GB Travel Drive with a number of readers mentioning the SanDisk Cruzer Mini . As it happens I do have a couple to test, although not the 1GB model.

The SanDisk Cruzer Mini comes in a nice package:

The drive lights up when powered on the left side shown here.

There is no hardware lock on this drive, although a software lock is available; compared to the Memorex Travel Drive, it will not interfere with other USB devices in adjacent USB ports: 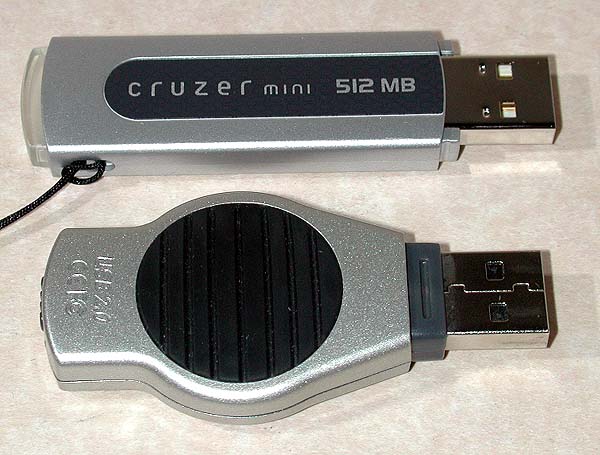 I ran HD Tach 3.0 on an Asus Z71A laptop – a typical configuration with USB 2.0 ports. The first benchmark is the short test, then long: 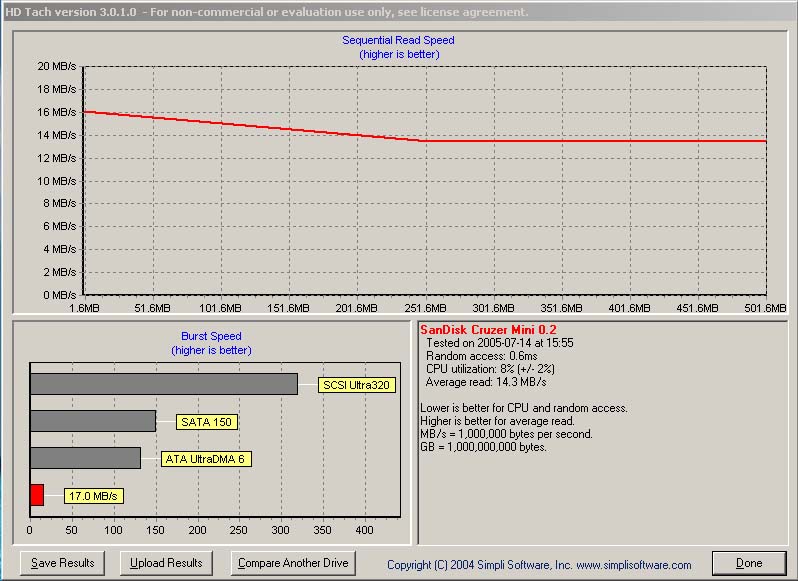 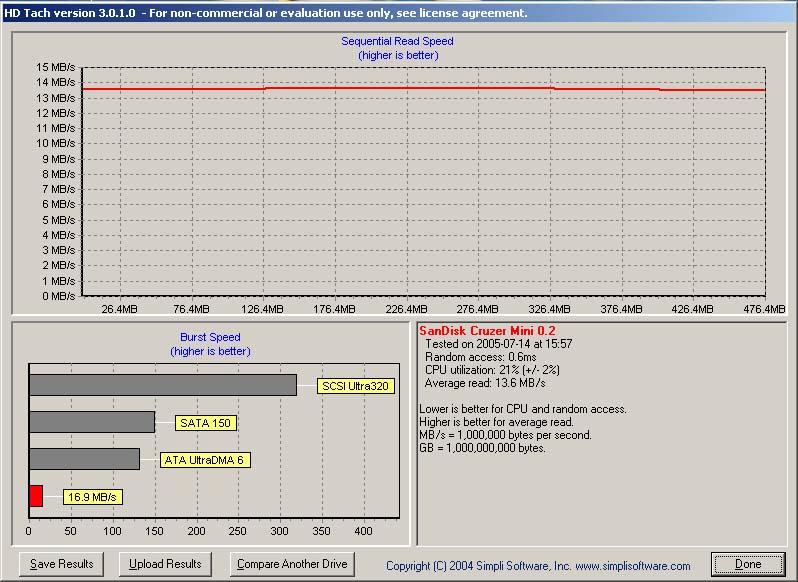 Not bad – a better performer than the Memorex by a fair margin.

I also have an earlier version of the SanDisk Cruzer Mini which holds 256 MB – I ran it out of curiosity: 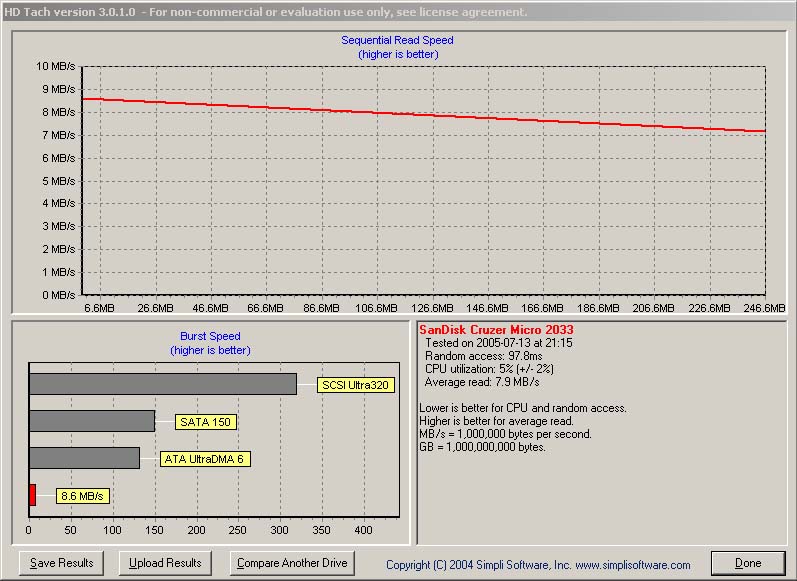 This tells me that SanDisk has made some progress with the performance of these drives – note the drastic improvement in Random Access time – an improvement of 163:1!

I saw LOTS of compact flash products in just about every form you could imagine at Computex – even one encased in a watch! With prices dropping as compact flash chips flood the market, finding one to meet your needs should not be a problem.

SanDisk, which has been in compact flash products for some time, has a good product with its Cruzer series; they’ve also improved performance – with prices declining and performance improving, a nice picture for consumers.
{mospagebreak}

Ed Note: I received a number of emails on this review and thought you’d like to see the following comments:

I have had some experiences contrary to what is stated in the review.

After using the 128MB Cruzer Mini for quite some time, I found that it occasionally interfered slightly when the USB ports were stacked closely together, like on the back of the case. It was a very tight fit sometimes, and you could often see that there was some torque on the USB key from the pressure of contact.

A better “slim” compact flash drive IMO, would be the Lexar Jumpdrive Sport. The drive is actually just the red part, and it pulls out of the rubber casing which wraps around it and protects the connector. I had the 1GB model, and there was always room to spare when plugging this drive in – it is skinny from side to side and from top to bottom. It’s also fairly rugged compared to other brands/models I’ve handled.

I saw your article today on the main site about the Cruzer Mini and I would like to throw in a few things. I have a 512MB Cruzer Mini that I bought for $80 at Newegg last summer to go along with my (then) new laptop — Acer Aspire 2025WLMi, both purchased for college.

Several weeks ago I found out that my Cruzer managed to take a ride through our washing machine – thankfully it never made it into the dryer!

I was quite surprised — after being submerged, sloshed, and beat around in soapy water for a good while, it still works great (no noticeable decrease in speed) and didn’t lose any of the files that were on it when it was washed. I still use it quite frequently — it’s as if it never happened!

I just wanted to tell you that I have the same memory stick you reviewed today and it’s the tops of any that I have used to date.

The only feature I wish it had is the 3.5 floppy emulation. It would be really nice if they had one with software that would alow you to enable and disable floppy emulation as needed.

As you have probably gathered at this point I am a member my company’s IT support staff.

I was reading the review of the SanDisk cruzer and came across this line: “saw LOTS of compact flash products in just about every form you could imagine at Computex – even one encased in a watch!”

I love my watch flash drive – it holds 256MB and is made by Meritline and I have had it over 2 years. It was $150 when I got mine (Ed note: now $92), but I think they are cheaper now. It was a godsend for backups of projects in school when the zip drives would fail.

I just ran across this:

A PR Blunder Or Not?

The Inquirer had an article the other day reporting that one consulting firm, Insight 64, thinks AMD is being downright negligent in not talking about its 90nm Winchester chips. With all due respect, we think AMD has very good reason

From a nVidia response to a Tweaktown question: TT – The cooling devices we’ve seen on GeForce FX cards are quite big and complex, why? Are you experiencing heat problems produced by the 0.13 micron process based NV30 core and

I’ve looked at enough early Venice results to come to the conclusion that 3GHz isn’t a realistic expectation when you use air or even water cooling. The only way you can realistically expect to hit 3GHz or more is with