Lots of capability, but too hot? – Joe

SUMMARY: Lots of capability in a small (maybe hot) package. 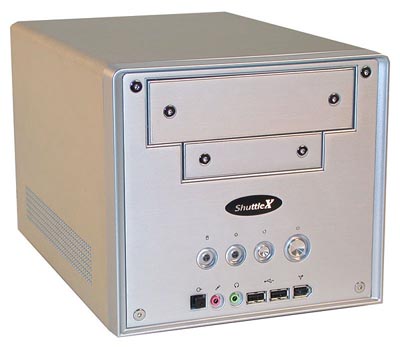 The good guys at UniQpc were nice enough to send us a Shuttle SN41G2 to test out. This is the nVIDIA nForce2 version of the Small Form Factor PCs that Shuttle is marketing so successfully (Shuttle’s specs HERE.) If there’s one thing you can say about these mini-PCs, they don’t lack for features. The more notable features include:

For a pipsqueak, this guy packs a punch! Dual monitor support, LAN, Firewire, decent audio and a TV-out function – many full size systems have less features than this.

Out of curiosity, I did try the TV-out function; about the best you can say is that if you’re stranded, it will do, but barely. However, using it to output a PowerPoint presentation or to record jpgs on a VCR is possible. Also make sure you download the latest VGA drivers as there is a bug in the release version (noted on Shuttle’s site).

Let’s take a closer look at the PC:

The back panel shows

the various features listed above; note there is NO parallel port – if you need one, it’s an option you must purchase. A look inside 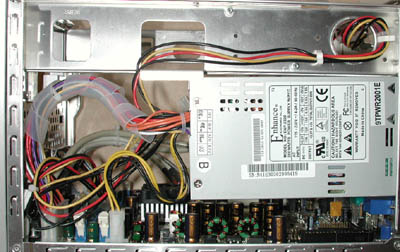 shows how closely packed everything is – and this is without the drive cage. Around the socket you see 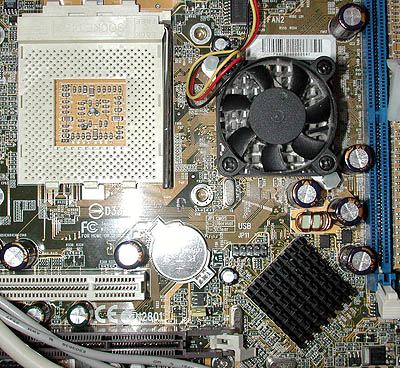 active cooling for the nForce Crush 18G chipset and passive for the MCP2 Southbridge chipset (it does warm up, but not excessively). Inside the CPU socket is the thermistor (the blue dot in the middle). Cooling is with 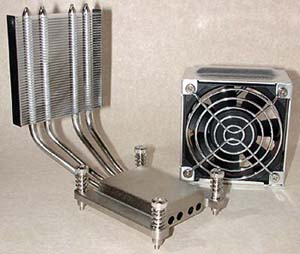 the Socket 462 ICE heatpipe – a fairly good unit. I found it very easy to install. The 80mm fan can be set in BIOS to couple CPU temps to fan rpms – I enabled this as the sound reduction is considerable.

There are two accessory slots – one for a PCI card and one for an AGP:

Now here I do have issues. If you look at the AGP slot, you’ll see that with a heatsink on the card’s GPU, it will be so near the cover as to severely impact GPU cooling. In fact, if you have a fan running, it will be hard pressed to breathe. The PCI slot is a challenge – a large PCI card may not fit, as it runs very close to the drive cage.

I had the same issue with the power supply in the SS50 and cut an opening for airflow – if you plan to use the AGP slot, I think you must consider fashioning a case intake port.

the unit shipped with it is rated at 200 watts – sufficient to get the job done. However, it does not appear to be particularly well vented – as we will see.

Finally, the Shuttle SN41G2 ships with about as many parts 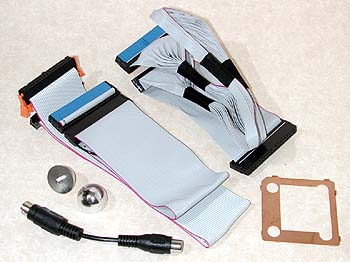 as you’ll need, including a CPU shim (which I did not use). The cable at the lower left allows you to hook up to an external video unit using an RCA jack – a nice addition. Included are two feet (above the patch cord), the purpose of which I find totally superfluous – but hey, that’s me.

Last, if you use the on-board video, note that the video RAM is shared, which means that it reserves a chunk (32MB) of DDR. At a minimum, I think 256 MB of DDR is required (only 2 DIMM slots), so plan accordingly.
{mospagebreak}

There are a number of the usual benchmark tests around, so I’m not going to duplicate what’s been done. Let’s say that this box holds its own very well; do a Google search and you’ll find benchmarks galore.

Rather, I want to highlight the one major concern I have with these SFF cases – heat generation and cooling.

I placed a number of thermocouples inside the PC to measure temps at idle and under load, using Prime 95, with the cover on and off. One method I used to measure CPU temps was to place a thermocouple on the side of the CPU core (an XP 1600). In addition, I recorded CPU temps with the in-socket thermistor. The CPU fan is moderated by a BIOS setting which ties fan rpms to CPU temps – you set the temp at which the fan will go full tilt.

I found the following:

Take a good look at the difference in power supply exhaust temps – almost a 10 C difference with the cover on and off, and a whopping 14.4 C difference between Idle and Stressed temps. This is not a real surprise as I found the same pattern with the Shuttle SS50; my solution there was to cut an opening into the cover and add a fan to the power supply (admittedly a fairly aggressive hack).

I like these little boxes a lot – a lot of functionality in a very portable package – just what you need for a LAN party. However, cooling is an issue; if you’re handy, punching some holes in the cover should go a long way to keeping things from getting too toasty.

The one over arching concern I do have is the power supply – stressed for a long time, temps will get up to levels I’m not comfortable seeing. Shuttle should pay more attention to this.

Last, the AGP slot is nice but its functionality is questionable. Being someone who’s keen on cooling, putting a hot AGP video card with an actively cooled heatsink in this box could be a real cooling challenge.

Thanks again to UniQpc for allowing us to take a look at the Shuttle SN41G2. Spend some time and look around their site – lots of goodies!
{mospagebreak} 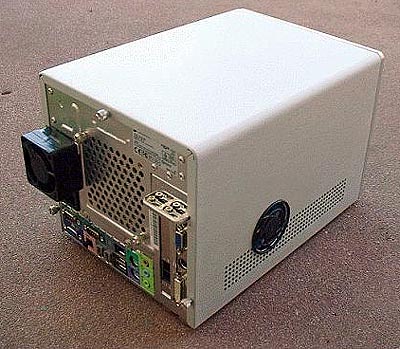 I started with the heatpipe ‘radiator’ – replaced the stock 80mm Sunon w/ a
Panaflo L1A pulling air into the case – as the stock setup blows already hot
case air through the radiator, then added another L1A to the heatpipe
heatsink (zip tied on).

Next the PS: I ran the system with the case open and the side of the PS
removed – I was amazed at how scorchingly hot the aluminum sinks inside the PS were – certainly hot enough to melt any wire insulation that might touch them and hot enough to give fingers a severe burn instantly.

To deal
with it, I pulled the tiny, loud little Sunon 40mm fan out, cut the
finger guard out of the PS and put it back in the case without replacing
the side of the PS – now the air that is drawn through the PS isn’t
restricted to coming in via the tiny vents at its rear (the PS is so packed
that there is almost no way airflow could be effective).

I took an old 60mm
fan, cut the fan out of it, taped its cage onto a 60mm SUNON 21 cfm fan
and plugged it into header one on the motherboard so its speed can be software controlled. The assembly was then attached externally, pulling air out of the PS/case.

Finally, using a hole saw, I cut a 2″ hole over the Ti4600 fan and attached a finger guard – the aluminium case is thin enough that any reasonably sharp
hole saw makes short work of it.

Now not only does it run significantly cooler, but a good deal quieter.
{mospagebreak}

Your SN41G2 article did get me to thinking about heat, so I performed an impromptu experiment. First, some system information:

Using an “Acu-Rite” digital indoor/outdoor thermometer (I checked the indoor/outdoor sensors against a “mercury” thermometer–within 1 deg F), I attached the “outdoor” sensor to the “top” of the Radeon 9500 heat sink (the card mounts straight up on this mobo) using the included adhesive pad (about 1mm thick double-stick foam pad) and ran the lead out of the unused parallel port cutout (which I resealed with tape). I reinstalled the cover and allowed the furnace to stabilize the room temperature at 24.5 deg C.

After allowing the video card sensor to stabilize at “idle” (desktop displayed), I noticed that the video card HSF was 39.5 C; within 1 C of the “System” (mobo temp) displayed in MBM 5.

I noticed no glitches or artifacts and the program looped successfully for over 20 minutes. Then, it suddenly dropped to 48.5 C.! I realized that the main fan must have switched into “high”, and I confirmed the fact by exiting from 3D Mark – MBM reported CPU temp as 49 C.

I restarted the machine and changed the “Hi Fan” setting in BIOS to 40 C. This would keep the fan running @ 3100 rpm.

In room temperatures up to 25 C, it’s probably safe to allow the Shuttle mobo to keep the fan “Low” (2400 rpm) without any problems with the 9500 Pro.

With room temperatures of 25 C to 30 C, set the CPU threshold temperature to 40 C to aid in system and video card cooling. The fan gets a bit (but not too much) louder. Above 30 C? Get air conditioning or remove the top cover!

XBit Labs reports that we won’t see Prescott EEs in the year 2004. Ehhhh. It then goes on to say not to expect any Prescott Xeons in 2004, either. Now that is important good news, for AMD. We don’t talk