Today we’re having a look at the be quiet! Silent Wings 3 case fans that came with the recently reviewed Dark Base Pro 900.  These fans are available in 120/140mm sizes at two different speeds of 1000 RPM and 1650 RPM as PWM or DC and are available at many retail outlets.

With such a variety of PC fans on the market these days a manufacturer really needs something that makes their product stand out. Basic considerations when choosing a case fan are appearance, cost, noise level and performance which depending on your needs will carry different weights in your decision. With that in mind let’s see how the Silent 3 case fans measure up and if they might be a product you would consider.

The Silent Wings 3 fan is a premium product. When you buy the fan retail it comes with two different fittings for the corners. However, we are reviewing the fans that came with the Pro 900 case,  so our review will focus on the 140 mm 1000 RPM PWM fans that were included. The image above shows the fan with what be quiet! calls “hard plastic fittings.” These may be hard on the outside but on the inside, there is rubber for reducing noise when a screw holds it tight.

The people at be quiet! sell you the retail fans with what they call “anti-vibration fittings” as well. They say, “Removable anti-vibration mountings on all four edges of the fan reduce vibrations transmitted to the PC case to an absolute minimum.” The corner fittings look nice, but because I never had them in hand I can only say the the pictures from be quiet have the fittings looking nice. 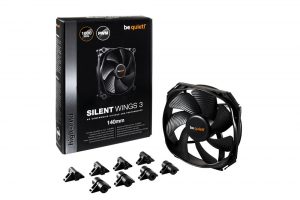 (NB – this and some of the subsequent photos were supplied by be quiet!)

The folks at the be quiet! website tout the features of the Silent Wings 3:

Some comments on their features: Most fans have four poles. In their PDF about these fans, be quiet! says that six poles contribute to a smoother transition between magnetic poles, less vibration, reduced power consumption and low start-up voltage. On the other hand, this usually is found only in more expensive fans.

Fluid dynamic bearings are an expensive option. FDB adds to the cost of a fan. Frame-shaping we have seen before.

The Silent Wings 3 normally comes in a box with a variety of accessories, including two sets of corner mounts, screws and connectors (photographs from be quiet!). The case fans did not come with “anti-vibration fittings” at the corners, but retail fans do.

We received the three as part of a Dark Base Pro 900 case, two intakes behind a dust filter in front and one exhaust.

The fans were installed with what be quiet! calls “hard plastic fittings” on the corners. Belying their name they have rubber cores designed to attenuate vibrations. To finish the job they fasten these fans with rubber washers.

As you can see on both intake and exhaust, these fans offer “optimized airflow” by providing their blades with a wavy shape. The furrows follow the air across the blades to smooth the airflow. It seems to work: these are quiet fans.

On the intake side the air tube flares at the corners to make the “funnel-shaped air inlets” previously noted. This corner shaping is in aid of static pressure. On the exhaust side, the air path is a straight tube.

An edge-on image shows us that this truly is a PWM fan.

Here is a closeup of a corner mount that has been removed, showing how the frame holds it in place. Note that the corner shows its rubber core in this picture.

An image from be quiet! showing an anti-vibration fitting on the corner. BTW, be quiet! has a PDF manual that shows you how to take these corners off. The manual has a diagram that helps us see just how vibrations are not transmitted with this corner fitting.

The fans were placed on a test stand, where their free air RPM was observed and their noise was assessed. The standard proxy for what you can hear is the Sound Pressure Level (SPL), measured in decibels and given a type A-weighting (dBA). A silent room is about 30 dBA.

The ambient noise for this set of testing is 31 dBA. To make sure we could measure noise levels that were softer than 30 dBA, the Sound Pressure Level (SPL) was set 10 cm from each fan. SPL was adjusted to 1 meter by subtracting 20 dB. The sound pressure meter is a Tenma 72-942. This fan tester has a microphone which is not accurate under 30 dBA. This is the limit of all but the most expensive SPL meters. At low levels sound measurement by extrapolation is not accurate, so that sound measurements are approximate.

The airflow was assessed using a standard measure, cubic feet per minute, or CFM. The air entered a sealed 8″x8″x8″ box (200+ mm on a side) where it was allowed to mix. The air left the box through an exhaust port, where it was measured with the vane head of an Extech AN100 anemometer, averaging 10 readings per fan setting. The fans were tested in an unobstructed state, with a metal mesh dust filter and on a 30 FPI rad.

The first thing one wants to know about these fans is how well they work in their intended application. From earlier photos, we saw that be quiet! uses the Silent Wings 3 in their premium case, as intake and exhaust fans.  So here is how they stack up:

The Silent Wings 3 are quiet fans. Their airflow is about mid-range but they are among the quieter case fans. Arguably with the other corner mounts, it would be quieter still.

Now for PWM. You wouldn’t normally use a 1000-RPM fan on a rad, but this fan is PWM-controlled. So to compare it with other PWM fans:

So the 1000 RPM slow speed version is not a radiator fan. For that one should try the highspeed version that nominally runs at 1650 RPM. But let us now look at the PWM control:

A speed range under PWM of greater than 500 %! Quite the range. If the highspeed version of the SW3 is like this it will be a fabulous rad fan.

These are excellent results for fans that came in a case. Usually cases come with pretty cheap fans. The fans we received with the Dark Base Pro 900 were premium fans. The retail versions of the Silent Wings 3 are even more premium than that, coming with both kinds of corner fittings, providing those users who like to fiddle with things something to fiddle with.

As advertised and as intended, these are quiet fans. The fans look good, too.

The Silent Wings 3 is an expensive fan at almost $21. This fan has a six-pole electric motor. Such motors are only to be found in “industrial” fans from other OEM’s. It is an expensive option for a fan that goes in a case. PWM is the modern way to control a fan’s speed.  PWM is nice to have, but you don’t normally have this in a case fan. Most case fans are DC fans that run at a fixed speed. This option also adds to the cost of the fan. Finally, the bearing is the patented FDB. True, an FDB will add to the longevity of the fan, but because it is patented the feature adds to the fan’s cost. It is hard to believe that be quiet! held the price of these down to under $21 each. It may be overkill for the use the fan is put to, but an enthusiast who asks for the best will find a fan with all the best features for a price that is surprisingly low. 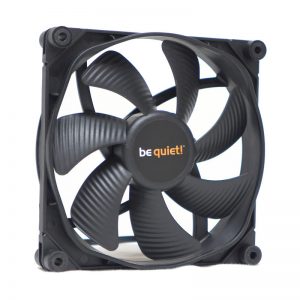 Be quiet! have introduced a flagship case designed to hold any system, be it air-cooled or water-cooled. The Pro version is the new launch. It has a piece of tempered glass in place of a standard side panel. It also contains LED strips to light up your system. It has highlight stripes in four colors – Black, Silver, Orange, and White. This is a big complex case. Is it all worth it? Let’s dig in and see!

65 Fans Tested on a Megahalems

The Megahalems comes with no fans of its own. You can choose your own fans, but what fans do you get? How well do they cool your system? How loud are they? When I decided I wanted to cool a 4GHz Core i7 860 with a Megahalems, I figured I would test a few fans and see how well they did. Needless to say, I sort of got carried away. I tested 65 fans in many configurations. Read all about it.