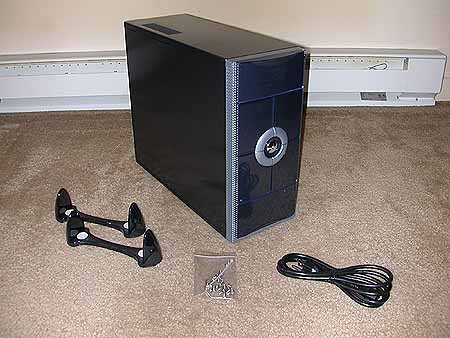 The good folks at SilverStone were kind enough to send one of their GD98LED
micro-ATX cases to take a look at.

When Tony Ou at SilverStonetek asked me about reviewing this product, he mentioned it was a small case. It is. The box it ships in would fit inside the average mid-tower case.

But don’t let that diminutive size fool you. It’s strong suit is one that a good many large towers stumble on…air flow. Of all the mATX cases I’ve ever used or seen, this has the best ventilation system going.

Let’s look at the basic specs, and then take a full tour of the GD98LED.

As can be seen in the first picture, this case ships with a bag of screws for mounting your hardware, a power cord for the PSU, and a pair of color matched stands to add a bit
more stability to this very narrow case. These stands also raise the case up slightly off the floor/desk/etc, which helps airflow, as we’ll see shortly.

On to the visual tour… 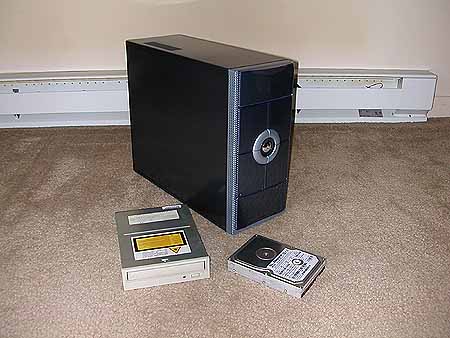 Just to give some reference for size, I snapped this quick pic with an optical and hard drive (the drives are dead, so ESD on the carpet wasn’t a concern… =P).
The GD98LED is narrower than the optical drive, yet still has provision to mount two of them, by putting them vertically. The two internal hard drive bays are horizontally
mounted, and are located in the top, in front of the power supply.

Bear in mind the orientation of the optical drives when selecting one for this case. 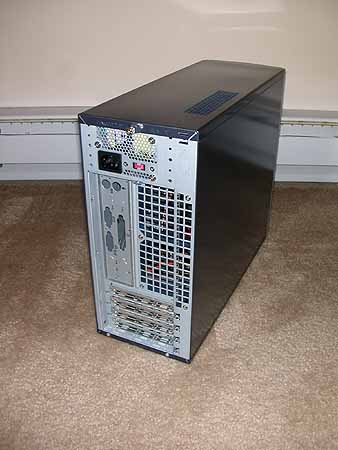 A lot of mid-towers don’t even have dual 80’s for exhaust. Nice.

A look at the back of the case shows the opening for the twin 80mm exhaust fans, alongside the I/O ports, and the included PS3 type power supply. Included, and also visible here
are a removable standard config I/O plate, and expansion slot covers (rather than knockouts). 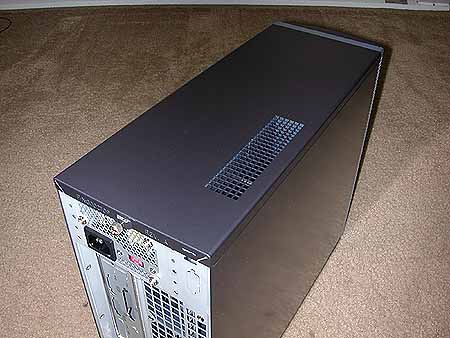 Looking at the top, we can see the external vent for the Intel P4 CPU fan dock. On the center of the rearmost edge, is a single thumbscrew. Remove it, and you can then slide the
top panel back, and off.

Removing the top panel exposes the PSU, top of the CPU dock ductwork, and the hard drive cage. From here both of the side panels can be easily removed, by simply sliding them up
and off.

The leads coming out of the PSU include: 20 pin main power ATX lead, 4 pin +12v auxiliary lead, one branch with two 4 pin Molex connectors routed up top for the hard drive cage, and one branch
with two 4 pin Molex connectors, and one Berg (floppy drive power) connector routed down into the case for the optical(s) and floppy drive. These two branches are just long enough to reach the
drives intended for their use. The two main power leads are sufficiently long enough to reach anywhere on the mATX motherboard.

When choosing 80mm fans for the back panel, bear this in mind, as there are just enough power connectors for a full complement of drives. Try to get fans that use 4 pin Molex pass through
type connections.

Taking off the left side panel shows a number of things. Front and center, is the P4 ductwork. The bottom loop is made to pivot on a hinge, so it can be moved out of the way easily to
access the CPU, or swap motherboards, etc (inset). Visible to the left of it, is the exhaust fan holder. The holder is screwed onto the rear panel, and the two fans simply snap into place.

Also just visible, on the top right corner of the ductwork, is a Chassis Intrusion switch. If used, removing the top panel from the case will trigger this switch. It’s very easily
removed, if not desired.

To the front, is the optical drive cage. Holding two drives vertically, this cage fills most of the front of the case. Below it, is space for the single exposed 3.5″ drive

These two drive cages are easily removable, with the larger optical drive cage held in place by two screws, and the hard drive cage by a single screw. 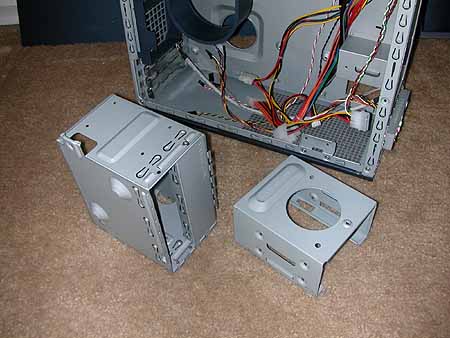 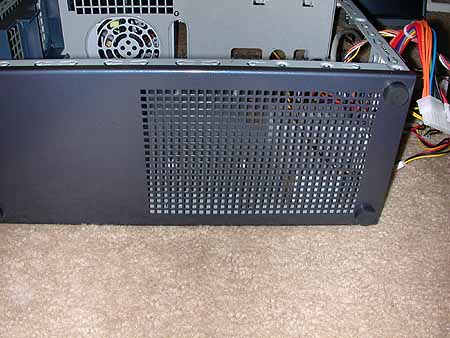 Visible in the last couple of pictures, and clearer here, is the large vent opening in the bottom of the case. Where the front of the case is packed, adding this here is how most
of the intake air gets into the case. This is part of the reasoning for the two stands included. Raising the case slightly allows better airflow into this opening.

Also seen here, is the fan built into the power supply.

Attached at each corner is a small rubber foot. I found these really keep the case from sliding around, and won’t mar your desk like
some plastic feet I’ve dealt with in the past. 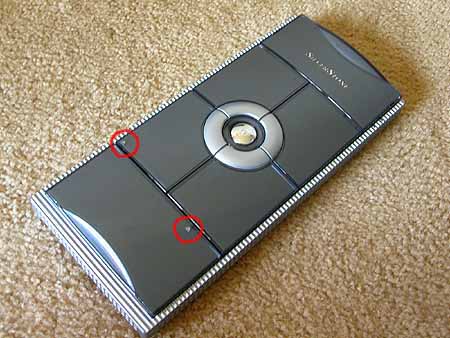 The front bezel is an attractive piece, made of clear plastic and painted on the inside the same color as the case.

In the center of the bezel, is the power button, surrounded by a decorative ring. At the top is the SilverStone logo, which I’ll discuss further in a moment. Below that, just visible
(circled) is a pair of small arrows. Pushing on them opens the two large doors on the front.

Opening the lower door reveals the front access ports, and the external 3.5″ drive bay. There’s provision for different ports available than what is equipped, presumably for variants
of this model case.

Left to right, they’re labeled: Composite (not used), microphone, headphones, Firewire (not used), 2x USB, and S-Video (not used). The leads attached to these jacks are
more than long enough to reach almost anywhere on a mATX board.

Visible in the front bezel shot above, is the SilverStone logo at the top of the bezel. This is actually a clear spot that didn’t get painted on the bezel. What they’ve done is to
mount a pair of bright LEDs behind the name, making it light up when the machine is powered on.

The two LEDs are wired into a 4 pin Molex pass through, so they don’t tie up one of the few 4 pin plugs the PSU has.

Of the two LEDs, one is a constant blue, and the other slowly cycles through three colors, blue green and red. The picture below shows the three colors.

Note: There is only ONE logo on the case (the blue on below)…the top and bottom logos were added via Photoshop. 😉 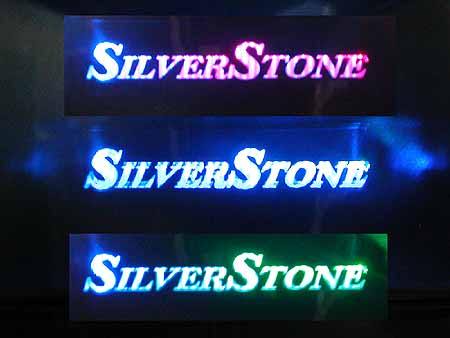 Nice lighting effect. =)
Testing it out

I had originally intended on testing this out with my trusty old ECS K7SEM motherboard, and had even assembled it using that board. When I hit the power button however, nothing happened.

Various swaps and tests later led me to the conclusion my K7SEM is no more. *sighs* Oh well…it was getting a bit “long in the tooth” anyway.

I recently reviewed
another mATX board, but had to return it before the GD98LED arrived. But, the upshot of all this is, when the time came, I was able to get a new board myself, that’s better than both of
the other two combined. =)

Enter the EPoX 8RGMI. I’ll be reviewing this board soon, too. How good is it? Well, I’ll leave that for the review, but let’s just say if it had the four holes around the socket, my NF7-S just might
go up for sale… 😉 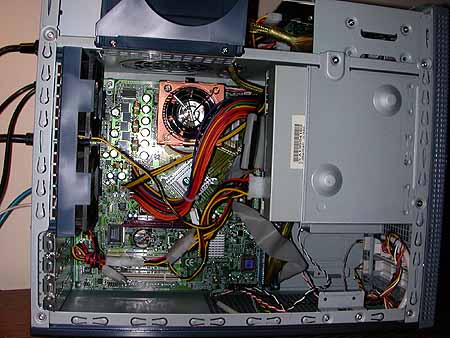 A couple notes on the above: I used this HSF and case fans, as they are very quiet items, which is what I was aiming for. SilverStone markets this as a “Quiet PC” case,
so that’s how I tested it.

I mention specifically the use of onboard devices, and lack of a floppy drive, as this opened up the inside of the case for better airflow.

Now, I want to mention here, that in the screenshots that follow, the CPU temps are a bit on the high side.

First off, the Arctic Silver 5 used hadn’t fully settled in yet. Allowed to, this would bring these readings down 2 or 3 degrees further. Also it seems that like most nForce2
boards, the onboard temp monitor for the CPU looks to read a bit high as well. How far I cannot guess, but I do know from experience that the temps shown here
are definitely higher than the actual.

This is my 3rd XP1600+ Pally, and before nForce chipsets, I used them on several other Via and AMD based boards (I’ve still got a pair on my MSI K7D Master). The same CPU/HSF
combo on that system reads about 8 to 10C lower. Anyways, I know these to be on the high side.

At default settings, and at idle, Ambient (room temp) was 23C. Considering the AS_5 hadn’t fully cured, these numbers aren’t bad. I honestly expected higher from such a small case.
Using the cooling that I did, the system was barely audible. Stronger case fans, and a higher output fan on the heatsink would naturally lower these numbers further, but increase system noise
conversely.

While this case isn’t geared towards overclocking, let’s give this system a bit of a “shove” and see how that effects things. 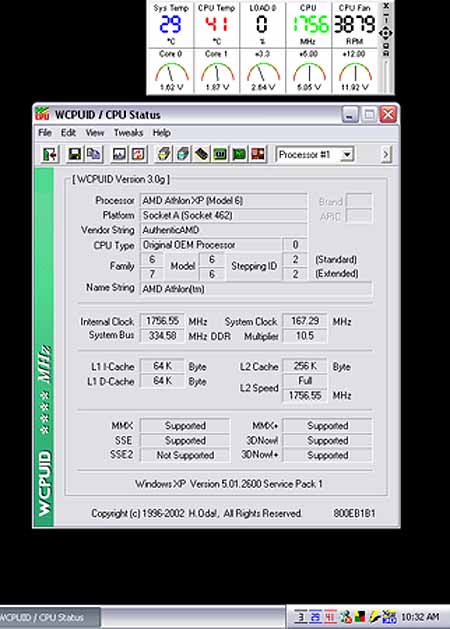 Also at idle, with the vcore raised to 1.85v, and the FSB to 166. Same ambient temperature of 23C. Still some pretty good numbers, considering the size of the system it’s built in. 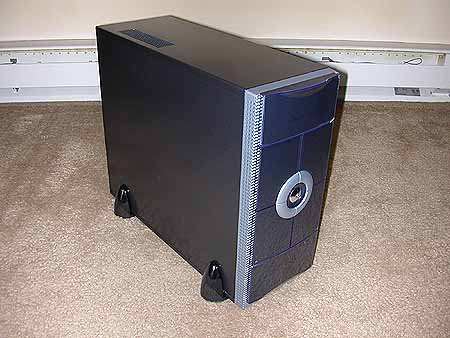 Pictured above, the GD98LED is sitting on carpet. I don’t recommend this while in use, as this would severely block off the ventilation in the bottom of the case.

Front access ports are a welcome addition in any case, and they’re included here. Ease of removing the side panels makes this very user friendly, as components can be changed if desired
in minutes. One thumb screw, and all of the panels come off.

The ventilation this product has is what really amazed me. Most of the mATX cases I’ve used/seen in the past made airflow an afterthought. The GD98LED features that as a priority in the design.

While overclocking in this case might not be recommended, it’s certainly not impossible. With the airflow available, some light overclocking is quite possible. Or would allow some very high end
components to be used.

This is a very handsome case, that with the right components mounted, would make for a superb HTPC.

I’d like to thank Tony Ou at SilverStone for sending this out for us to look at today.

OK, you’ve read the hoopla and the hype. Here’s the other side of the story. Do you know what the core problem with socket 754 processors is? They’re great processors, for OEM machines. If you’re not going to overclock and

Some thoughts on what it takes – Ian Anderson

The Copyright Office will be seeking comments about possibly revising the current exemptions from the anti-circumvention provisions of DMCA, but if you read the instructions, it looks like the only comments they want will practically have to be legal treatises.