I have been getting emails asking me where to buy these – I still can’t find who makes them. If you want something as good, go to RDJD for the K601.

SUMMARY: I find a No-Name Socket 7 Thin Fin heatsink to cool almost as well as the Alpha Socket 7 – for less than half the price!

I was at a computer show and a socket 7 No-Name heatsink caught my eye. We did a review on the Thin Fin P3 heatsink (HERE) available from The Card Cooler and were very impressed with its cooling ability. This is one case where size matters, size being the area of the heatsink’s cooling surface.

So I took it home, tried it out and found it to be very quiet and efficient. Now this is not an expensive cooler – I got this for $15 and was so impressed I bought another 5 for $12 each (I will use them in Celeron systems I am building for a small office). The obvious question then became “Well, how good is this thing anyhow?” Naturally this meant a shootout with the Alpha Socket 7.

As you can see from the picture below, the No-Name Thin Fin is a bit smaller than the Alpha – it sports a 60×15 mm fan turning about 4500 rpm; I have not been able to get any more specs on it – the fan is made by Innovative, the same company that did 60×25 mm 26 cfm fans found on Global Win heatsinks. 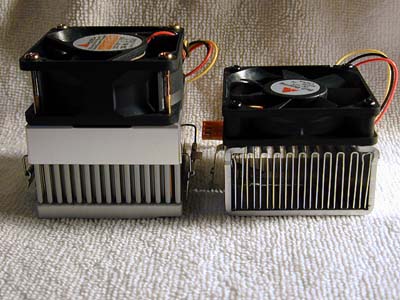 I then mounted the Alpha and No-Name Thin Fin on a slotket with a Celeron 366 using my SOYO 6BA+IV as the test platform. From this setup I computed C/Ws for each (go HERE for methodology). What I found was about what I expected – cooling efficiency not as good as the Alpha but pretty close:

These results were with system temp of 22 C. The CPU temp per the thermal diode for the Alpha was 27 C, for the No-Name 29C, both while running Prime 95 @ 366 MHz. Now with a retail price of roughly $10-$15, the No-Name probably costs about $3-$5 at the distributor level. This is damn cheap but very effective cooling.

I felt that folded-fin heatsinks were going to become more common and what I find even better is that the manufacturing process is cheap such that very effective cooling can be had for very reasonable prices. I’m sure we will see even better designs shortly as heatsink vendors roll out new folded-fin designs.

Meanwhile, if you run across something like this, the odds are that it could be a good deal. If you find an interesting one, drop me an Email.

Why This Is So Hard To Put On A discovery came to light when I was fiddling with a pair of newly acquired Thermaltake Aircoolers. (The famed “Golden Orb,” of course!) The mounting clip is VERY hard to put on,