Today up on the test bench at Overclockers.com, we’re going to have a look at one of the new nFORCE II offerings from the kind folks at Soltek. Soltek, while not one of the first names that rolls off the tongue, has a history of producing solid, well-priced and readily available motherboards.

The SL75 line of motherboards is available in 4 slightly different variations. Today we’ll be looking at the version with the Nvidia nForce SPP+MCP (System Platform Processor + Media Communications Processor) – the non-integrated video version of the chipset – and on-board Serial ATA+PATA RAID. Additional SL75 offerings include both RAID and non-RAID versions with integrated video, as well as a version with neither RAID nor integrated video.

For complete specifications on all of the motherboards in this line please check out Soltek’s site.

As I do with all of the motherboards that I’m lucky enough to be able to evaluate, I’ll be using a number of tools that should shed some light on some of the inner workings of our subject. I’ll again be using the RAM Stress Test Pro card from Ultra-X to exercise the system without having to load Windows and encounter numerous additional variables. In addition, I’ll show you some of the more important system voltages using an oscilloscope and DVMs in hopes of demonstrating the board’s performance and limitations under stress. 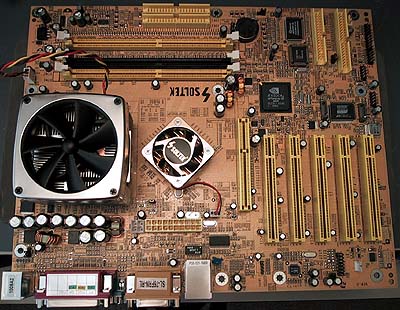 The SL75 line of motherboards, as you can see, is quite a yellowy shade of gold. I haven’t seen a board with this coloring before this one and I must say that it is quite…uh…unique. Not my personal taste, but I suppose a really good choice for the gold fan grill crowd. In any case, the board has a reasonable, but not enormous, set of features which include:

Let’s have a quick look at the physical board…

The SL75 has a usable, but not optimal, layout. As you can see, the ATX power connector is located to the lower left of the CPU socket, with the 12V connector located just above it. The location for these connectors is troublesome because it requires both power supply cables to cross over the top, or be routed around the CPU heat sink fan.

I prefer that the ATX connector be as close to the top right hand corner of a motherboard as possible. By design, the 12V connector is supposed to be close to the CPU socket, and it’s narrow cable bundle tends not to be a problem with airflow – so this one is fine. 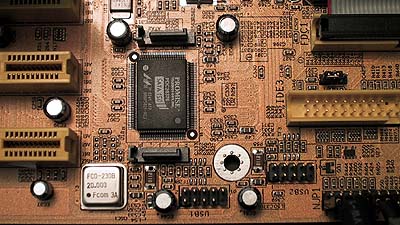 The floppy and Parallel ATA RAID connectors are located on the lower right corner of the board and are oriented parallel to the PCI slots. Again, this isn’t my preferred orientation because it adds to cable routing and airflow problems.

The remaining connectors for the front panel, USB 3-6, and SATA are well located near the bottom edge of the board.
{mospagebreak}

Soltek chose the Phoenix/Award BIOS that most of us are very familiar with. Most of the functions related to overclocking are located on two screens: the Advanced Chipset Features screen and the CPU Ratio/Voltage Control screen. 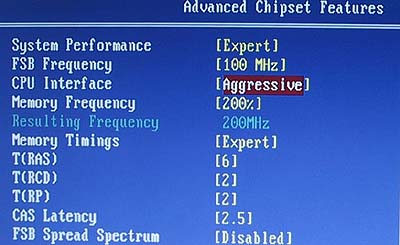 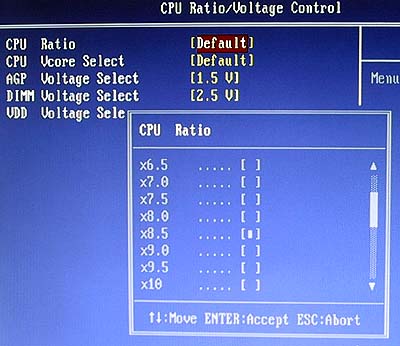 Even though Soltek mentions to us that the SL75 isn’t really targeted toward the overclocking community, the advanced chipset control screen has a multitude of “adjustability” levels. Lower levels of various functions assign parameters for the user, while higher levels open up these parameters for individual adjustment. 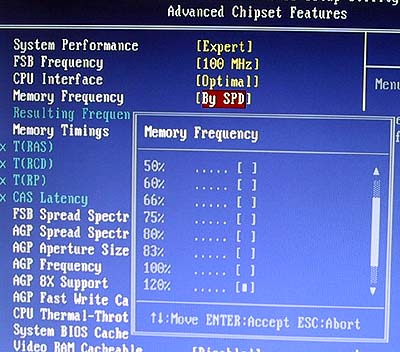 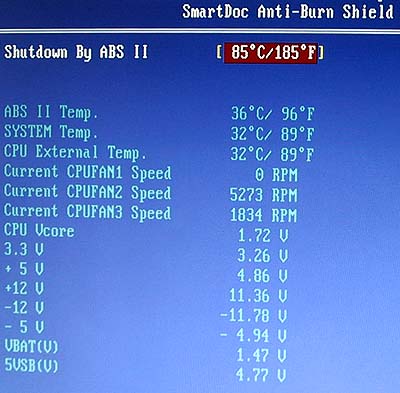 A comparison of the BIOS screen’s readings vs. my readings using a Fluke 8050A 4.5 digit multimeter is below. These measurements were taken at idle while the BIOS screen was active:

OK…Now for a little testing. Our test rig for this review consists of:

For our traditional first test, I like to install the components and let the system boot with the default settings it chooses. In this case, it chose an FSB of 100 Mhz, a multiplier of 10X and a memory clock of 200 Mhz. The system POSTed, booted and then entered the RSTPro auto stress test without fault, but soon errored out while running the memory tests.

Making only a slight adjustment to the Tcas from 2 ticks to 2.5 ticks allowed the board to then run successfully. In further testing, I was never able to run this board and RAM combination with a CAS 2.0 setting reliably above DDR333 speeds.

Overclocking this motherboard and getting stable and reliable operation turned out to be somewhat of a challenge. All of the necessary BIOS tweaks are available, but I found that you can’t just go in and set an aggressive configuration from the start. In order to arrive at high FSB speeds, I had to run the board at progressively more aggressive settings. In other words, if I tried 8*166, it would never work unless I had successfully run it at 8*133 for a while and the board was all warmed up.

While this was pretty frustrating and required a new “OC cycle” to start at each CMOS reset, I was able to run successful RSTPro passes up to 8 x 204 Mhz or 8.5 x 200 Mhz using memory multipliers for DDR speeds up to approximately DDR300. As I mentioned earlier, I was able to run the memory at SPD defaults (2/5/2/2) as long as the resulting DDR rate was less than ~DDR340.

Failures resulting from excessive FSB speed usually manifested themselves as loud beeping, inability to POST or hanging upon entering the RSTPro routines, but failures related to using too aggressive a CAS setting were easily visible in the RSTPro screens.

Running at these settings, I measured the voltages and currents used on the board. I made some very interesting observations:

Actual voltages after on-board conversion being delivered to major components:

As you can see above, Soltek REALLY runs this board with a high Vdimm. I made many measurements with a number of devices and they all verified that the default voltage being generated for the DIMMs was approximately 2.9 volts when the BIOS setting was calling for 2.5 volts. I’ll leave judgments about the merits of default overvolting of the RAM to you, but overvolting of the RAM out of spec (ALL of the DRAM manufacturers mention 2.8 volts as the absolute maximum voltage for their modules) just isn’t a good idea, in my mind.

For the first time in my career, my Corsair DIMM heat spreaders were actually warm (warmer than body temp) to the touch. Maybe this is Soltek’s attempt at greater memory stability, but I feel that overvolting this much can be dangerous – especially if you increase the Vdimm above the default. Under the best of circumstances, running the memory at 2.895 volts will cause it to run quite hot and lessen its life – while MAYBE contributing to stability. Under the worst of circumstances, you might simply fry your RAM.
{mospagebreak}

Taking a look at the Vdimm with the oscilloscope, we see that it is thankfully quite clean and noise free: 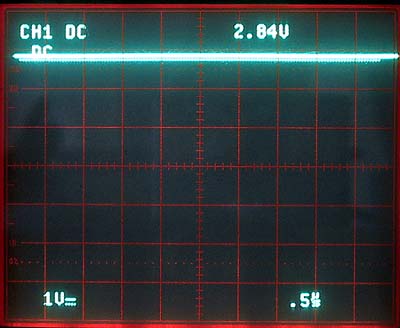 Unfortunately we cannot say the same thing about the Vcore: 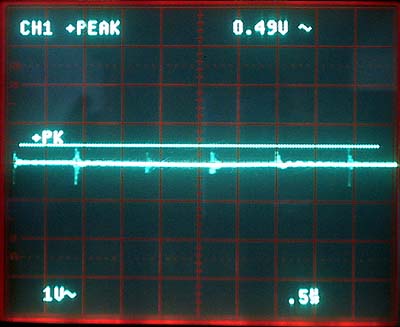 As you can see, there are little noise spikes present throughout the Vcore at the intersections of the 2 phase PWM power cycles. The SL75 utilizes a two phase power circuit controlled by the Intersil HIP6302CB PWM controller.

Downstream of the controller are 2 pairs of Intersil 09N03LA MOSFETS followed by four Sanyo 1500 microfarad ESR capacitors, five unnamed 3300 microfarad caps and two familiar toroidal (doughnut shaped) inductors. The fact that we see noise on the Vcore line is indicative of a few things:

One can be insufficient or poor quality filtering components, such as the capacitors. Another can be due to not placing these components both as close to, and equidistant from, the CPU power plane. Since there is rather low current draw from this motherboard on the 12V line feeding the Vcore, I suspect that the noise is due more to the latter issue.

One very nice aspect of the SL75 is the fact that the PCI and AGP clocks can be locked at a particular frequency rather than a divisor of another frequency. My testing throughout the range of usable FSB settings confirms that the PCI bus clock does, in-fact stay at 33.4 Mhz.

Another interesting aspect of the SL75, which I haven’t found in other RAID equipped motherboards is the ability to create a 3 drive RAID 0 array using 2 SATA drives and one PATA drive. The RAID implementations I’ve seen all separate the SATA from the PATA arrays and some allow only the use of one type of connection.

Summarizing a bit, I’d say that the SL75 is a good board to tinker with and tweak, but probably not the board you would want to use in a long-term, hands off overclocked situation.

On the positive side, the board clearly does have the capability to operate at very high FSB speeds and memory performance is great as long as you stay away from CAS 2.0. The degree of overclocking options in the BIOS should keep most people busy for a long time trying to find the best settings for them. The unique ability to mix SATA and PATA drives in the same array is also a nice plus.

On the down side of things, I don’t know what to make of the fact that you must “ramp up” to a high FSB speed rather than just dialing it in and running the system. Maybe this is indicative of a marginally fitting mechanical component coming into compliance under the effects of thermal expansion – but I have no way to know.

I’m also not too comfortable with a nominal DIMM voltage higher than the manufacturers recommend as their maximum and the ability to potentially fry the DIMMs. Soltek should either make BIOS health screen report the true voltage, or preferably match them to the listed BIOS choices of 2.5 through 2.8Vdc.

For a non-overclocker’s board, the Soltek SL75 does pretty well overclocking. In a non-overclocked environment, the board should run well, but the heat and stress resulting from the natively high Vdimm might cause or contribute to problems over the long term. Given this board’s modest price (~US$90) and its high OC capability, I have an overall positive impression of the Soltek SL75 in spite of the issues mentioned above.

Thanks to the folks at Soltek. for giving me the opportunity to review it for you.

Checking Out Our New Toys With The Iwill P4HT

We asked people what they thought of Via, and they answered, “Not much.” – Ed