One week ago I bought a new CPU (Wing Computers, Solomou 24 Athens) with the Coppermine core, a PIII 650 FC-PGA (SL3XV OEM) with the new stepping cB0. I heard and read a lot about this CPU (best buy, great overclocking abilities, low cost) and I wanted to see what speeds I can reach with it without using exotic methods of cooling (water blocks, peltier, etc). 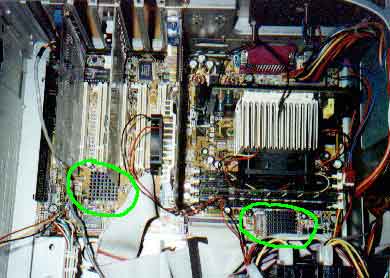 Shown are the PLL and Southbridge chips with heatsinks.

I decided not to push it harder for a couple of days just to make sure that the chip was pretty stable at that speed (I shot at it loads of SETI, PRIME95, NFS 5, DAIKATANA; he he he – torture…torture). When that period of time ended, I decided to increase the FSB step by step with small increments:

The CPU couldn’t post at any FSB above 140MHz.

It was very satisfying that the CPU reached 910MHz. I know other CPUs can do better than that (and with less voltage) but I think that was pretty good for an OEM chip.

Unfortunately the CPU was running very hot (40C at idle and 57-60C at full load). It is the unbelievably hot summer we are having here in Greece – what can I do? This didn’t help to reach higher speeds – that was my belief at the time!

I spent a lot of time with the CPU trying to make it run stable at 910MHz but unfortunately it didn’t. Then I read a post in Overclockers Australia’s Forum which offered me one more chance to make that possible without using extreme methods of cooling (peltier was my last chance). One of the Forum Moderators was saying that additional cooling of the Clock Generator, or PLL chip, (it generates and controls the FSBs) can make flaky FSBs run stable and as a result the CPU can reach higher speeds!

I looked for the chip on my favorite board and when I located it (it has the shape of a small rectangle with an ICS 9250 marking number on it and it is located right beside the Dimm slots and the IDE connectors ) I touched it just to see why this chip needed extra cooling. I was really surprised – I almost burned my finger! That chip was running extremely hot ! Almost as hot as my Voodoo3 3000 AGP does!

I decided to give it a try.

I went to a vendor near my place who sells everything that has to do with PC cooling (heatsinks, water blocks, peltiers, fans) and bought a couple of small heatsinks (small enough to fit exactly on the ram chips of your VGA card) that had thermal tape underneath them and some bigger ones (the bigger the better). Some of you may already have a small heatsink lying somewhere useless; it is time for that heatsink to be useful to you. 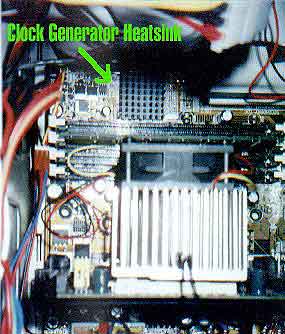 Get some thermal epoxy or some thermal tape like THERMATTACH
T410, T411 (Chomerics) and attach the heatsink on that chip and you will be surprised with the results (some desperate guys used thermal grease and two or three drops of instant glue)! I’ve heard of people who attached a heatsink and fan they borrowed from an old TNT2 or an old CPU on that small chip with amazing results.

I tried it myself but the results weren’t different from the results I had with the small heatsink attached on the clock generator chip, so I decided to stay with the heatsink. Here are my results:

This CPU is better than I thought! I only wish it ran cooler, then maybe it could be stable at the higher FSBs. I’ve heard also that the Clock Generator chip runs cool on some ASUS P3V4x mainboards, but that I cannot verify. Some of you may not experience any improvements by cooling the “greenie” but some of you may experience what I did and even better.

All I can say is that it’s worth the extra effort or money.
Still here reading this? Go get a heatsink and cool that “greenie”!!!