After 6 long months I finally upgraded my computer again. This has been the longest stretch ever. I must say though, it’s been worth it. I bought myself the Shuttle XPC SB61G2, a 2.4C P4, and 512 MB of Kingston HyperX PC3500 ($99 at best buy). I took tons of pictures throughout the installation of my shiny new XPC and I guess I’ll do a little write-up on it.

This is the newest XPC from Shuttle. It uses Intel’s Springdale chipset (Northbridge – Intel 865G, South bridge – ICH5) which supports the 800 MHz FSB P4’s, dual channel DDR, onboard video, onboard 10/100 network, onboard sound, blah blah blah. Hell with it – for specs
go here.

Now onto the exciting stuff – pictures! 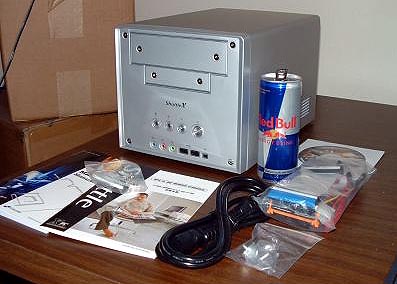 Man this thing is tiny. When I first opened it, I thought they only sent me half! If you’re familiar with RedBull, I put an empty can of it next to the XPC for comparison. It comes with all the cables you need – 1 short ATA-133 IDE cable with just 1 connector (for main hard drive), 1 Regular sized (2 device) ATA-133 cable for CDROM (which is somewhat rounded), 1 Serial ATA cable, 1 serial ATA power cable, Manuals and the generic PSU power cable. 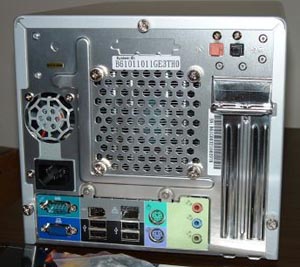 Here’s a picture of the rear where you can see the many connectors. Now I proceed to tear the thing apart. It’s a nice touch for Shuttle to put all thumbscrews on the back, although I needed to use a pair of pliers to get them loose the first time.

Gripe #1: Maybe I’m just used to the 15 lb steel side panels on my old Chieftec case, but the case cover for this thing feels extremely flimsy. It’s as light as a feather, but I almost felt that I could crush it like a pop can. 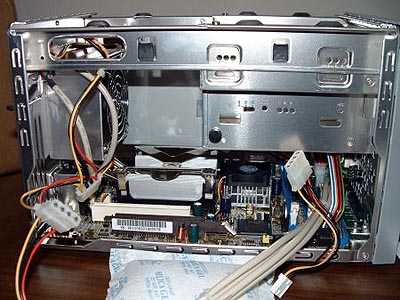 View from the side. Note the 2 lb Silica gel packet they included
– reads “Do not eat” …Mmmm Silica gel…. 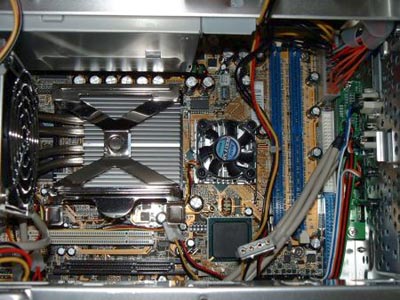 Picture of the inside with the CDROM/HD tray removed. It’s amazing that they could pack all that stuff onto that puny little motherboard. Now I had to take out Shuttle’s ICE heat pipe cooler, but it was rather easy due to the thumbscrews on the back holding it to the case. The clip on it was rather difficult to disengage the first time, probably because I didn’t know what the hell I was doing 😉 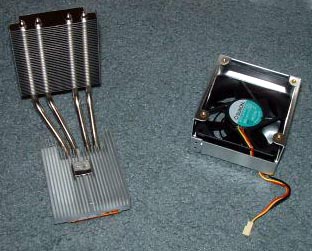 Here’s the whole thingamabob removed from the case. I’m sure there are already plenty of reviews on this already (like this),

so I won’t go into much detail ;-). It is a rather interesting design. When you first see the HSF, it doesn’t look like it would work all that well but once I started up the computer, I was pleasantly surprised. 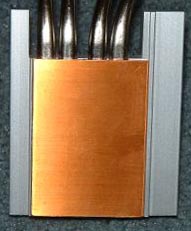 The base needs lapping, though. Somewhat smooth to the touch but I could slightly feel ridges with my nail. 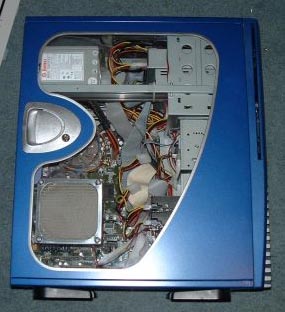 My trusty computer. It’s demoted to being a file/game server (yes, it’s dusty – haven’t opened it in 2 months). You’ve served me well. Now to gut her for the parts I need for the XPC: 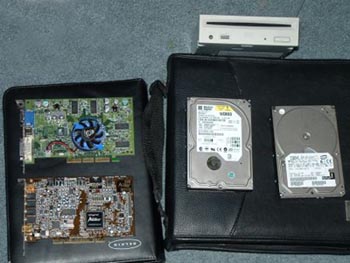 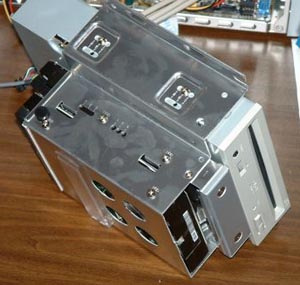 Now to start putting it together. After much fiddling with the awkward shape of the tray, I managed to get the DVD drive secured along with the WD hard drive (bottom). The manual told me to put a floppy in, but what kind of old fossil still uses one of those? 😉 I opted for my other 80 GB hard drive. With 2 hard drives, it’s sure to make this thing even more of an oven on the inside.

Gripe #2: These Shuttle designers must have been on crack. Who in their right mind puts a capacitor next to the connector AND a huge mass of wire connectors right above the IDE connector? I nearly snapped that poor capacitor’s head off trying to get the secondary IDE cable in there. 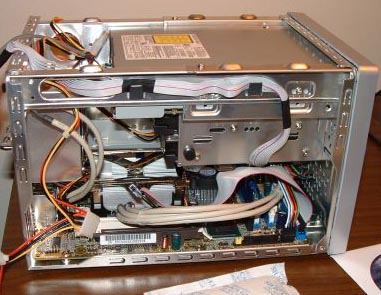 I put the now heavy CDROM/HD tray back in. It took me 45 minutes alone to get all the cables routed and hooked up right in this thing. As you can see, there is absolutely no room behind the CDROM for (according to the designers at Shuttle) unnecessary things like hands. You can see the somewhat rounded (looks like they squared it instead) IDE cable with the handy mounting clips on the side of the XPC. 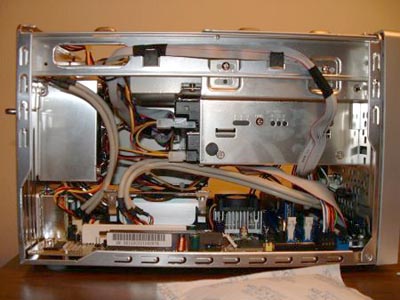 Here’s a side view (sun went down so I’m on indoor light now) with all the cables connected, FINALLY! 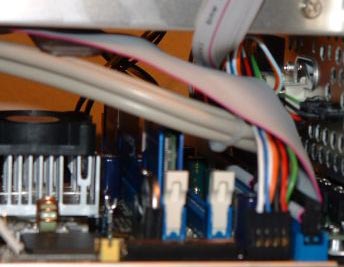 Gripe #3: Now why couldn’t they have switched the first and second IDE connectors around? The first (in front) IDE cable is all twisted in an awkward way to get to the connector on the HDD. There’s this clip underneath the CDROM/HD tray that’s supposed to keep the primary IDE cable in order, but it’s useless because it’s all twisted due to the way the connectors were set up.

I guess that would have made this too easy… 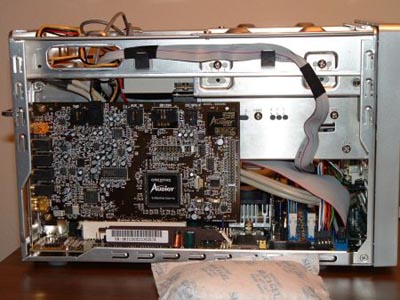 Wahoo! Time to put the cards in. This must mean I’m done with the hard part. Good thing aluminum isn’t that conductive because the Audigy is *almost* touching the CDROM/HD tray… To be safe, I put a sticky thing of neoprene between them so they won’t touch. 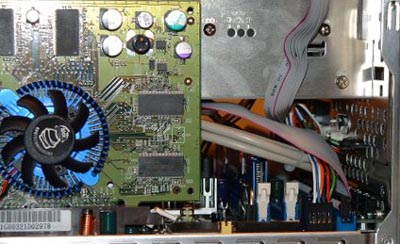 OH MY GOD! I can see light through it! Shuttle didn’t cram enough stuff into that puny case!

This thing is a complete airflow nightmare. When I was putting it together, I thought I might be able to crack an egg on top and make my self some breakfast while I’m at a LAN party… 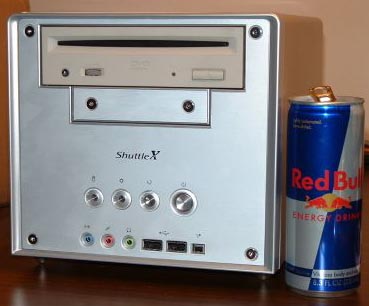 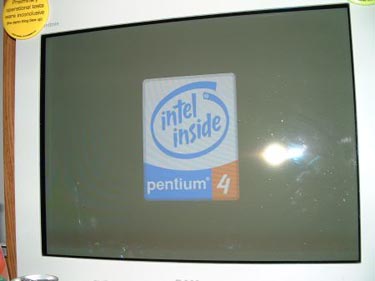 I just had to get a picture of the button on my monitor:
“Preliminary operational tests were inconclusive (the damn thing blew up).”

Did the fun stop here though? Oh no.. It goes on. 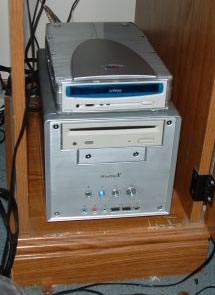 For some odd reason (me thinks the lens is dirty), my slot load would refuse to install Windows correctly. I kept getting read errors off my Windows XP CD. Conveniently the same day the XPC and processor arrived, the USB 2.0 external IDE enclosure came as well. So I slapped my CDRW into there. I had to install Windows from the external drive, but that went flawlessly (although a bit slower). The motherboards BIOS detected the USB drive no problem and happily booted from it. 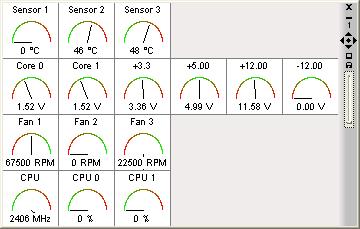 Even though this only has a 200w power supply, all voltages are very solid. For some reason, I can’t get MBM to read the fan on the heat pipe correctly – I highly doubt it runs at 65k rpm.

Sensor 2 is the Case temp and sensor 3 is the CPU temp. As I said before, I was surprised by the results of that heatpipe cooler. These are load temps, not idle. Amazingly, the inside doesn’t get all that hot either.
The air coming out the back though is rather toasty.

In the BIOS there is a fan option called Smart Fan. You set the starting temp and the fan adjusts itself according to CPU temp.

Example: If you have it set on 40C, when its below that the fan spins at 1k rpm and is near silent; then for every 5 degree temp increase, the fan goes up in speed a notch. That’s probably the reason why MBM can’t read the speed of the fan.

I have it set on full speed though, because I’m running folding. It is still not all that loud – the hard drives make more noise than my fans now.

Now for the overclocking results! 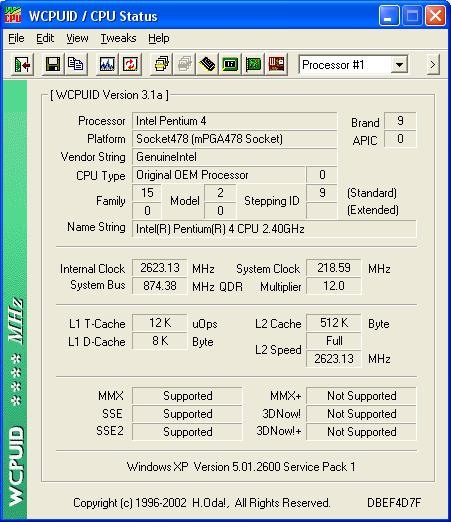 Which are not very good 🙁

That’s the highest I could get my 2.4C running in this oven. But that’s OK, considering its nearly a 50C load temp. I had to raise the CPU voltage to 1.6v to get it stable at 218 MHz FSB. But my RAM timings are 2-2-2-7, which is crucial since this is going to be a LAN party gaming rig.

Overall this has been quite an experience building this tiny computer. I think we take for granted the amount of space we have to work with in regular mid/full tower cases. I am quite happy with the XPC. Now my next purchase is going to be a better videocard and another 512 mb stick of RAM for some dual channel goodness.

I was just approved for a new credit card a few days ago and I bought myself some more things for my XPC: A shiny new Sapphire 9800pro and another stick of 512 MB PC3500 HyperX. 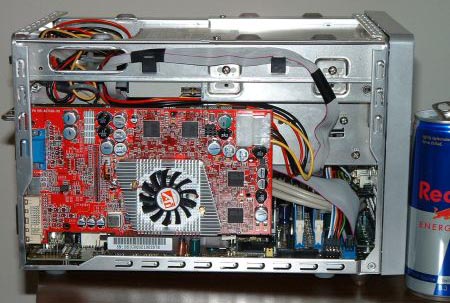 I’m sure there are people that are saying something along the lines of “OMG! That n00b put a 9800pro on a 200w psu!!”. Surprisingly, it didn’t explode ;-). Voltages are still as stable as they were before and I haven’t had one crash. I’ve been gaming rather heavily since I put the card in, so I should have seen stability issues by now. I emailed Shuttle about a higher capacity power supply and they sent this back:

Thank you for your interest in Shuttle Computer products.

Currently we do not offer any powersupply over 200W. We are working on the newer PSU and schedule to release later on in Q3. Please check back with us, or sign up our newsletter, we will send out press release when we launch the new PSU.

Well hopefully it gets released soon. I may have to mod the XPC to put a blowhole in to cool down the PSU a bit. It’s running nearly as hot as my processor, which can’t be good.