NewMod City.com had a Spray Off Competition to coincide with the NMC’s First Anniversary Themed Case Modding Contest. This was hosted by dillusional, and I myself was one of the contest judges along with Masbuskado and special guest judge, FrenkieNL. Full details of the contests can be found in the above links. Being a judge in the above contests I wasn’t allowed to officially enter a project, but that didn’t stop me from being enticed … so here’s a little project from me for the NMC’s Spray Off! 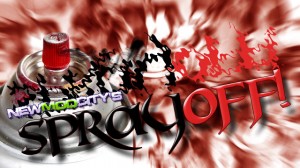 My Theme – Hands of The Gods

Like Masbuskado, I too was very into drawing by hand, sketching,  architectural building, and Egyptian drawings from a young age. I also loved drawing galleon ships, planes, trains, and automobiles (hey, sounds like a movie). Although that was a long time ago, every now and then I would get out the pencils, water colours, or acrylics and oils; another thing haven’t done in a while. So, I have been enticed to do a panel for the Spray Off, and the theme will be “Hands of the Gods.” Hopefully my hands aren’t too shaky and I will be able to pull this one off.

Video Overview – Hands of the Gods

Here are some of the side panels I have left over (orphans) from previous case mods with some of the spray paint cans to be used, and the idea I hope to incorporate into the panel. It’s inspired by a painting by Michaelangelo.

Hopefully it will end up looking something like this:

I have decided to go with the smaller case panel for now. I sanded back and prepped the panel with two coats of medium gray with light sanding in between coats. The actual size of the panel is 41 x 34.5 cm.

After looking at the sketches over a few times I thought maybe it would look better diagonally: reaching up to the gods or reaching down from the gods, depending on how you want to look at it! So, here is what I have in mind.

After another rather hot day (37 °C), I was able to get a couple of plumb purple coats with sanding in between.

Then, it was back to the garage to work on spraying the clouds on the panel to resemble the heavens above. This was done using a stippled effect to give it more depth.

Using the stencils, I have laid down the “Hands of the Gods” base coat in a copper color.

Next comes the tricky part, highlighting and detailing the hands. So, this is how the detailed “Hands of The Gods” turned out.

Some coats of clear gloss provide protection and make the detailing  ‘pop’, thus making it look even more lifelike! One of the other NMC Staff Moderators (Shiryu_ligra) asked me to make desktop pictures of “The Hands of the Gods” which can be found here: “Hands of The Gods-Desktop Pics”. I have also taken some close up photos of the hands after they were clear coated with two coats.

All done and personally signed by me.

Thats all for now: I will do another final clear coat then it will be finished!

Thank you for viewing my “Hands of the Gods”  – Spray Off project.