SUMMARY: THE ENTRIES ARE IN, AND HERE THEY ARE!

When I wrote the review of Sunbeam’s EL Cable kits,
I was a bit surprised to see a contest had been proposed at the conclusion of it.

Our own Joe Citarella proposed the idea, and the good folks at Directron
jumped on board to sponsor it. I’d like to take this opportunity to thank Michael Chang at Directron for offering to help us with this project.

When all was said and done, I had received entries from six people, one by e-mail, and five through the O/C Forums themselves. One person suggested a “gallery” of all
entries submitted, which I thought to be a very good idea. This will be that gallery, and the announcement of the winner for this contest.

Between the six entries, there were 14 individual pictures submitted. I’d like to thank these people for their submissions. Some time and effort were put into them, and it was
great to see other’s ideas for this product. The entries range from the simple to whimsical, and encompass not only computers but other uses for EL cable you might not have considered.

So, without further ado, let’s have a look at our entries. I’ll arrange them by entrant in alphabetical order, and pick our winner at the end.

Note: The decisions of the judge (me…) are final. Any dispute over the decisions thereof should be referred to our Complaint Department. =)

Our first (alphabetical by name) entrant is “da-gokesta” from the O/C forums. He submitted four pictures for the contest, and he writes:

“Ok here are some entries. It’s supposed to look like the OC forums logo, but it was fast. The O is at the top, the C is to the left and under the O is the lightning.”

“I have some el wire around the outside of my monitors? Does that count? Here’s my monitor:”

While this last one certainly isn’t “practical”, it’s my favorite of the lot. I got a good laugh when I first saw it, and still chuckle every time I look at it. Hilariously
funny stuff. 😉

Our second entry comes also from the O/C Forums, and was submitted by “dowmace”, who writes: 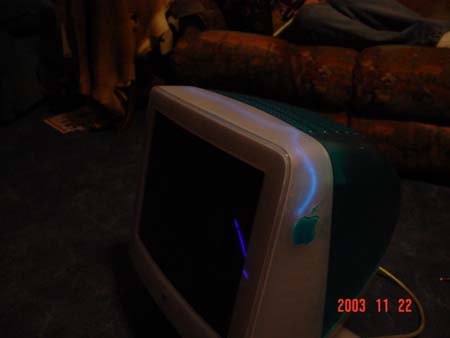 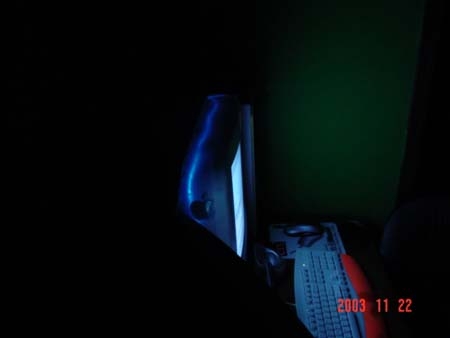 Our next entry is also from the O/C Forums, and was posted by “FizzledFiend”, who writes:

“Sorry for such large images..I took 2 so you can see better what i did. If I ever get the time…er…um the gumption to do this mod over I think i would have used wire loom
first then wrapped the EL wire around the loom instead…I have tried wire loom to clean up wires, but it looks as bad if not worse than bare wires.

It took 3 sets of wires to cover all of these wires and took about 1.5 hours to do. Also I have noticed that EL wire either gets dimmer with time or I somehow got 2 different brands.
I dunno, looked the same packaging…anywho should have bought enough EL wire to have done the mod all @ one time.” 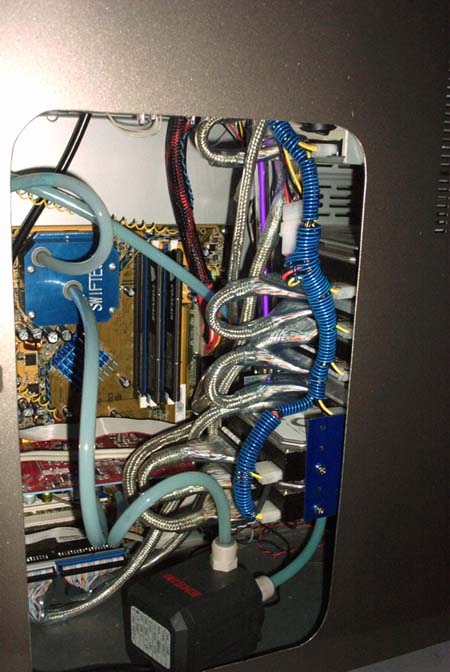 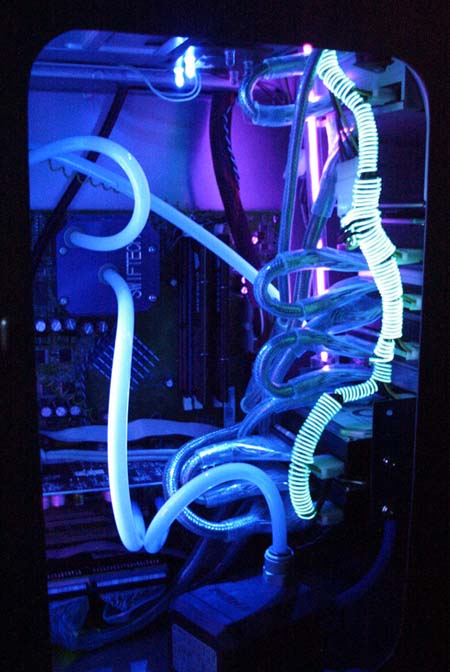 The next entry is the lone e-mailed entry, all the way from Sweden. Peter Strandberg sent me these three pictures, which use the EL cable in an entirely different way. It not only
looks great, but is very inventive, as well. Peter writes:

“Hi. Here is my contribution for the mod contest, It’s the logotype of Audi, the four rings (to rule them all) :). 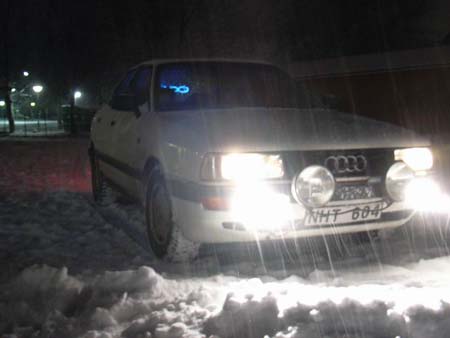 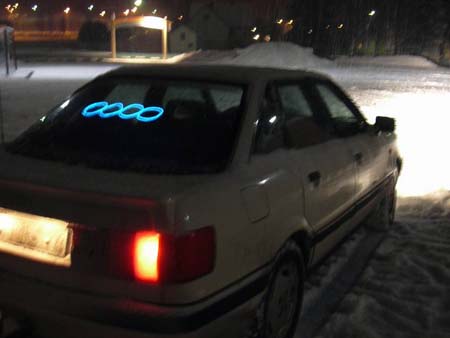 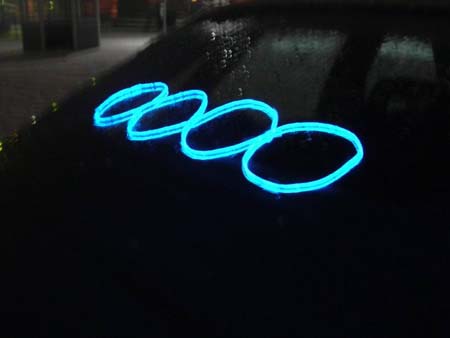 Well Peter, ask and ye shall receive. All of the entries can be found right here. =)

These pictures give me the idea of getting some red EL wire, and tapping into the 3rd brake light wiring of my car… Both run off of 12V DC, so it’s just a cut/spice procedure to hook the EL inverter in.
Obviously, Audi “rings” wouldn’t work on a Pontiac Bonneville, but I’m sure I could come up with something…”Hang Up And Drive!” perhaps?? (I wonder if 59″ of EL wire is long enough to spell all of that out….)

Our next entry is again from the O/C Forums, and comes from “Resqme”, who writes:

“Here is mine. Just some EL wire used in the front where there were four slots cut in the bezel.” 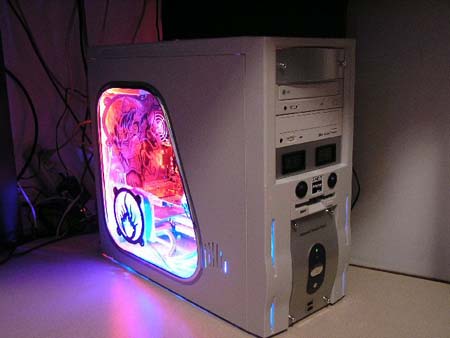 I’m still trying to figure out what all of the colors in the window are…. It’s certainly different, whatever and however it’s done…. Quite colorful, for sure. 😉

Our final entry, the last from the Forums as well, comes from “vonkaar”. While what he’s done is very cool, if the item was still operational after the surgery, I would be
more inclined to reply with something like; “OMG d00d….thatz just soo u83r1337!! U roxorz!!” =) He also has some notes on the pics and mod, and says:

“Anyway, before anyone asks, yes the HDD is dead. Initially I was going to put a small piece of EL wire inside and keep the HDD active, like the LED windowed HDDs I’ve done in the
past. After I saw how much room was inside the thing I decided to simply scrap it. It was only a 2GB drive so no loss. I put 6 feet of EL cable inside the drive =p. The pictures suck
pretty badly but the thing *really* glows at night.

The best part is…

When it’s all said and done, it will be my HDD activity meter . The read/write head and armature still moves incredibly fast… the ‘night’ picture got a bit of the blur from the moving.
It moves a little bit when it’s simply powered on, so I could do a simple HDD activity mod simply by powering it. What I ‘hope’ to do in the end will be the Bit-Tech (I think) mod that uses
the HDD armature in sync with ‘actual’ HDD activity. The blue light at the end is ‘exposed’ EL wire. Most EL wire glows either light blue or white and the “color” is nothing more than the
color of the plastic. I thought it would look cool exposed at the end. 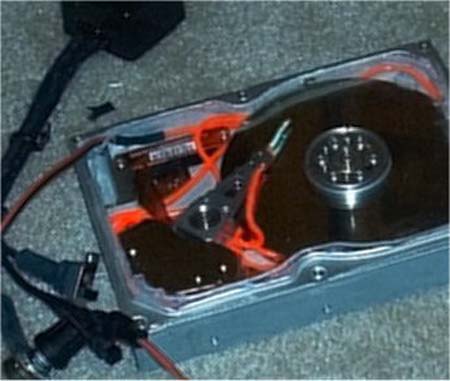 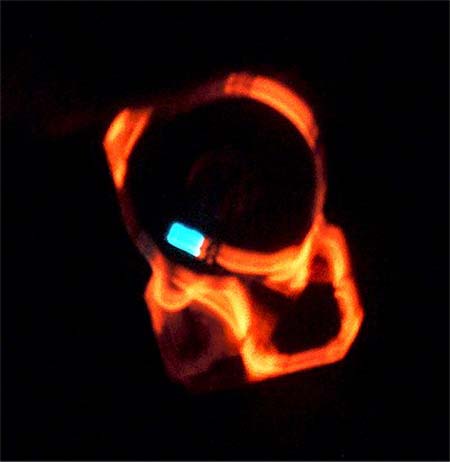 Getting this drive working, and put in a clear acrylic case would be an incredibly cool mod. I hope you can do this and make it work…

In true contest fashion, we ought to have a drumroll preceding the announcements of winners…. So, let’s see if we can get the man considered by a great many people
to be the all time best drummer in the world to help us out… Neil Peart of Rush. 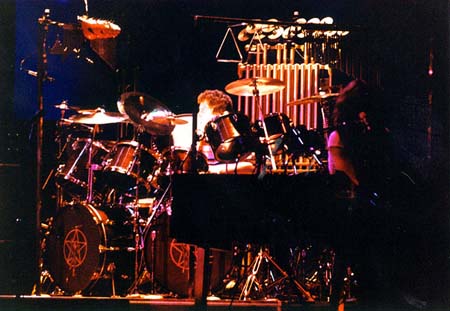 Now, one thing I hate is a contest where one person walks off with the booty, and those who made an effort and came up short walk away empty handed. NO ONE is going to walk away empty
handed here, as we’re going to cut off their hands…. =) No, no, no…just kidding. I did some digging and sifting thru the odds and ends I have here, and have come up with a few things of my own for the remaining entrants.
It’s not much, but I really want to reward these guys for making an effort. Let’s have a big round of applause for the entrants!!!! 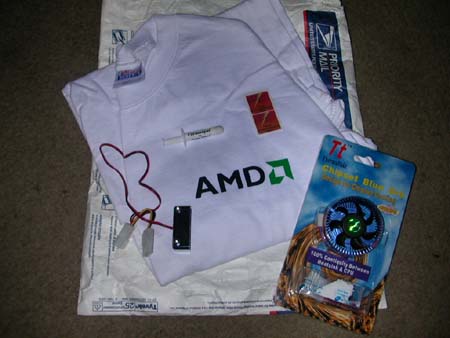 The runner up goodies…

And the First Place prize, of a $50 gift certificate to Directron
goes to “FizzledFiend”

CONGRATS TO ALL THE WINNERS!!

Thank you for taking the time to submit an entry in this contest. And a HUGE THANK YOU goes out to the fine folks at
Directron, for sponsoring this event.

I hope that we can do something like this again in the future, as it was a lot of fun. I also hope that people get some modding ideas from the pics submitted, that they can use on their own
systems.

How responsible is silicon for the current financial crisis?


Best URLs To Peruse Over The Weekend

The following articles caught my eye during the week – if you missed these might be worth a look, including the most embarASSing photo I have seen from space: