I was talking with Brett, my EE pal, and somehow we got to surge protectors. Brett casually says something like “…and of course you know that they eventually wear out.” Huh? Now this may be a “DUH!” for the EEs out there, but it was an eye opener for me. This prompted me to do some research into the topic, and I thought the “EE-challenged” among us might benefit from what I found.

First, I think many of us accept that it’s a prudent step to protect your PC and associated electronics with a surge protector. AC Electrical transmission is inherently noisy and voltage surges, or spikes, are not uncommon – lightning, power company load switching, short circuits, improper home wiring and blackouts are prime sources, for example. These spikes can be as high as 6000 volts – and that’s not too good for electronic circuits – they fry very quickly.

One critical characteristic of transient spikes is that they are very quick – any device that serves to filter out a voltage spike has to detect and trap the surge in nano-seconds. What you need is a kind of “electrical sponge” that soaks up excess energy very quickly and dumps this excess harmlessly.

The most common type of suppression device used is the metal oxide varistor (MOV). MOVs are cheap, react very quickly and can absorb large amounts of current compared to other solutions, such as zener diodes and gas-tube arrestors.

MOVs are variable resistors similar to potentiometers, except that MOVs react almost instantaneously and automatically to voltage spikes. However, similar to a sponge, MOVs eventually “get full”; that is, they can only absorb so many spikes and then they stop working. When they cease to function, the surge protector now becomes a power strip – and you don’t know it! On most surge suppressors, there’s no visible sign that the MOVs are not working.

After talking with Brett, I went to Circuit City and bought a Belkin surge suppressor model# F9G. This particular model features an LED that indicates the MOVs are OK. if the LED is not lit, “…your surge protector was sacrificed to protect your equipment and should be replaced” (in this case, Belkin will send a free replacement).

If you remember anything remember this: ALL MOVs DETERIORATE WITH USE.

In addition, how does the this blocked energy dissipate?

It should also be noted that the MOVs can get very hot – surge suppressors made prior to 1998 are potential fire hazards.

What To Look For – CONTINUED page 2…

There is an Underwriters’ Laboratory standard for “Transient Voltage Surge
Suppressors” (TVSS), number 1449 second edition. Any surge suppressor that does NOT meet this standard is worthless. A surge suppressor that protects both electric circuits and telephone lines will have a UL sticker showing both UL 1449 2nd edition and UL 497a. It should say “UL Listed”, not just “UL Approved” or “UL Tested.”

You should also see something that indicates “Clamping Voltage”. This is the peak voltage the suppressor allows. Without going into how this is derived, accept that for 120-volt circuits, 330 volts provides the most protection. Voltages higher than that should be avoided to protect 120-volt circuits – in this instance, higher IS NOT better, nor is lower.

Surge suppressors are marketed with a “Joule” rating. A Joule measures how much energy the suppressor can absorb – the higher, the better. However, like the sponge, once the suppressor absorbs its Joule rating, it can’t absorb any more – it’s now a power strip.

A positive indication that the MOVs are no longer effective is a real plus, and is the only way you’re going to know that you now have a power strip rather than a surge suppressor.

Another possible indication of quality is the warranty that comes with the surge suppressor. The more the manufacturer is willing to cover, the better the device. However, read the warranty carefully – you’ll find that it’s no slam-dunk by any means to collect. For example, if your device only has AC outlets and you have phone or coax connected to your PC, then you have to prove that the failure was due ONLY to an AC power surge. I also found phrases such as “…in its sole discretion…” to be a BIG loophole.

Finally, there is a stricter standard: The Federal Government standard requires testing and labels devices as Grades A, B and C, Classes 1, 2 and 3, and Modes 1 and 2.

Grade determines the level of surge voltage and current applied during testing, Grade A being the highest, surviving 1000 surges of 6000 volts and 3000 amps. The Class specifies the “let-through” voltage (not clamping voltage), Class 1 being the best, not exceeding 330V. The Mode specifies whether ground is “contaminated”, that is, that the excess voltage is dumped into the ground line. Mode 1 devices do not use the ground to dissipate the spike.

The best products are certified as Grade A, Class 1, Mode 1. However, finding products that meet these standards is no easy task, as meeting these standards is more expensive than UL 1449. In my research, I did find a lot of background material from a company called Surgex that markets very high quality, and expensive, surge suppressors meeting the Grade A, Class 1, Mode 1 standard.

If you see the key words “UL 1449 adjunct endurance testing”, that should indicate a product that meets the Federal standards outlined above.

Without going into detail, an Isolation Transformer is like a voltage firewall – there is no direct link between the incoming line and the line to your equipment. While potentially more effective, it’s also a lot more expensive. For us mere mortals, the surge suppressor is the best option.

After I changed to the Belkin, I took a closer look at the old one I replaced; first I looked at the label:

Hmmm…. no Joule rating, but at least it’s “UL Listed”. It appears to have a “protection light” that might be tied into the MOVs, but I can’t be sure of that. I opened it up: 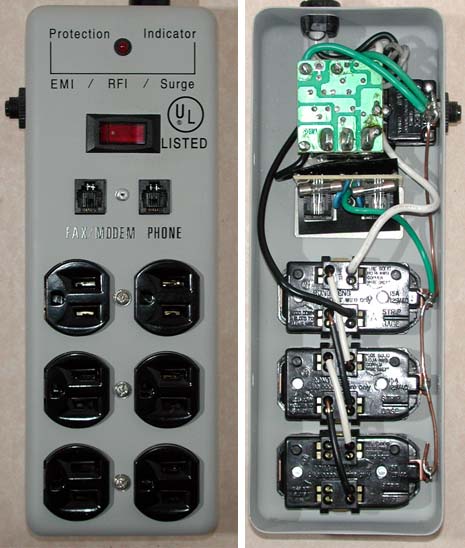 and it looks kind of sparse – not a surprise, as I probably paid something like $20 for it. I used a mirror to look under the PCB: 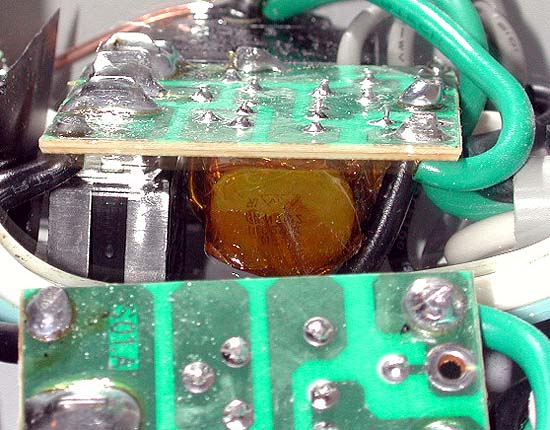 The round thing must be the MOV – the Belkin has 10 of them – this, I think, one or two. Based on my now “extensive” knowledge of surge suppressors, this unit offers minimal protection.

Do some research, read the product’s specs and spend the money for a good surge suppressor. IMHO it’s cheap insurance.

These are informative but marketing tools for Zero-Surge:

What is a Surge Suppressor?

AMD Listens To Me Again :)

Digitimes reports that AMD will come out with a cheaper dual-core processor in about a month (this link will work for free for only a few days). They announced a price of $345 for what looks to be a 2GHz,

Here’s the next chapter in the story. Please refer to Is Linux Ready for Prime Time? and its follow-up for additional details. I should also warn you….it’s long…so go get a cup of coffee…..and I only re-read it once…so my

Perhaps you’ve already heard about the the case of Michael Fiola. Apparently, he got a new laptop from his employers, and shortly thereafter, the employer’s IT people measured very heavy Internet use. They took the laptop, checked it and found