SUMMARY: Imagine living a stone’s throw from Antarctica. Imagine an average summer temperature of 10C/50F and 0C/32F for winter, with weather so changeable that you might see rain, snow, sun, howling winds and dead calm on the same day. This is Ushuaia – “Fin del Mundo” (“End of the World”).

What follows are my impressions after visiting Ushuaia for four days, talking to some very nice people about how they use the internet and what PC hardware is available. Part I – Ushuaia; Part II – The Internet and Part III – PC Hardware. 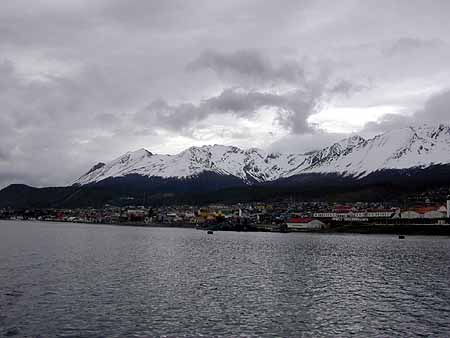 For a number of reasons, I decided to take a trip to Buenos Aires, Argentina. I also decided to visit Ushuaia – this is a city of about 45,000 people on the island of Tierra del Fuego, literally at “Fin del Mundo” – the “End of the World”. Ushuaia is the southernmost city in the Americas – next stop: Antarctica. 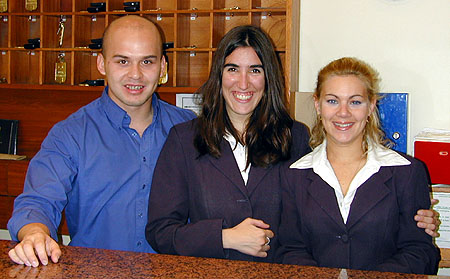 Now, one thing I must say about Argentina is that they have some of the friendliest people around. This is part of the staff at the Hotel Cap Polonio who really went out of their way to make me feel at home. I should mention that the ladies are between boyfriends and are interested in “expanding their horizons”, so if you would like to drop Natalia or Veronica a line, I’m sure they would love to hear from you.

Prior to the first settlers in the late 1800s, Ushuaia and the surrounding area was home to the Yamana, Haush, Selk’nam and Alakaluf Indians for 6,000 years. Like so many aboriginal peoples, interaction with the settlers proved to be disastrous – unknown diseases (eg, flu), attempts to “civilize” the indians and whiskey combined to quickly eradicate them; there are no pure-blood indians alive today.

After establishing an Anglican mission in 1871, Argentina established a prison colony in 1902 as a means to settle the area. This was the principal “industry” until its closing after WWII. Ushuaia grew rapidly from about 3,000 people to its current 45,000 people as Argentina fostered growth during the seventies by granting incentives to electronics companies to set up factories. 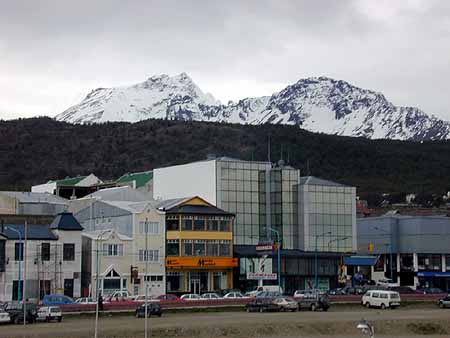 A view from the harbor – buildings are not very tall – there is perma frost and foundations shift a lot. Urban planning has not been high on the priority list until recently.

In addition to industrial incentives, Argentina also made Ushuaia something of a “free port” to encourage people to live there. Consequently, liquor and cigarettes are very cheap. In addition, heat and cars are similarly subsidized by the government. 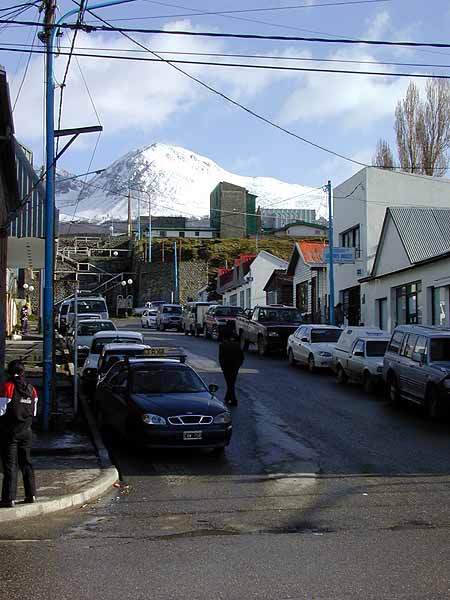 Looking up a local street, note the mountains are very close.

However, the electronics factories became uncompetitive during the 80s with the globalization of the industry and Ushuaia now finds itself struggling somewhat for jobs; unemployment is about 14%. Tourism is taking hold and for good reason: Ushuaia and the surrounding area has some of the most incredible environments one could imagine. In addition, because the seasons are opposite North America, winter is in June and Ushuaia is building ski resorts to take advantage of its winter attractions.

The people who live in Ushuaia come from all over Argentina, so communications with family and friends in other parts of the country are very important. One advantage of starting late as a city is that Ushuaia is “leapfrogging” technologies. According to one estimate, there are about 10,000 mobile phones in use with about 3,000 people using the internet and growing every day. 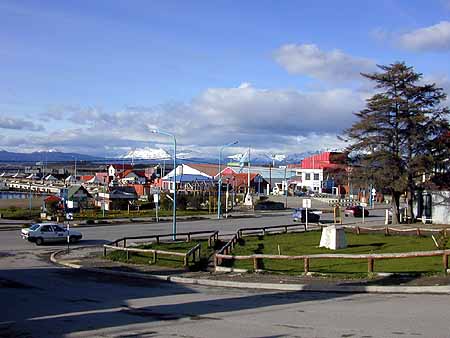 It’s not always cloudy! The main street is San Martin – about 16 blocks long.

Phone connections are limited to 56 K right now, but it looks like data satellite connections are coming to Ushuaia shortly; this should mean higher speeds and possibly reduced pricing – more on this in Part II. 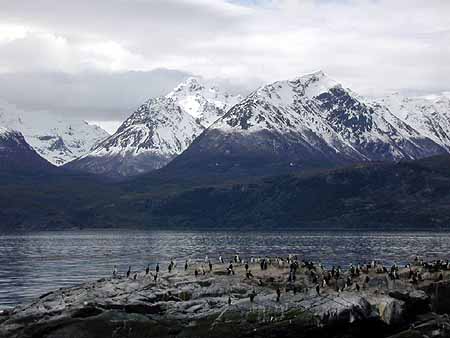 The Beagle Channel is home to an abundance of wild life – I saw many sea birds and sea lions on a quick tour of the channel. Typical of so many rugged environments, it is paradoxically quite fragile. For example, a fallen tree can take up to 400 years to decompose, so any changes to the environment are long lasting. There is a strong environmental awareness in the area and efforts to preserve it are ongoing. 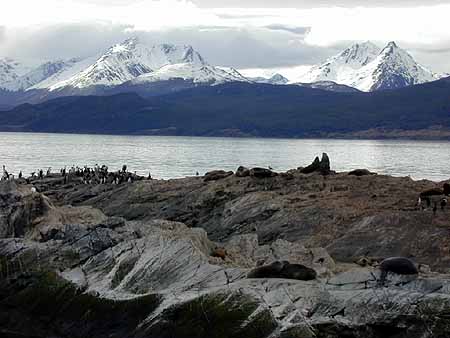 Sea Lions – the smell was terrible! 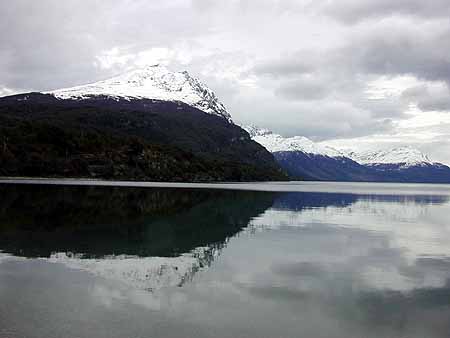 A calm day on one of the many mountain lakes in the region.

Attractions for nature lovers abound – the Parque Nacional Tierra del Fuego abounds with hiking trails and campgrounds, some no more than a cleared area. There are peat bogs, hidden lakes, forested areas and many beaver dams. The beaver, introduced to spur a fur trade, have no natural enemies and are prolific. They are also rapidly changing the environment by damming streams and drowning trees in the process. 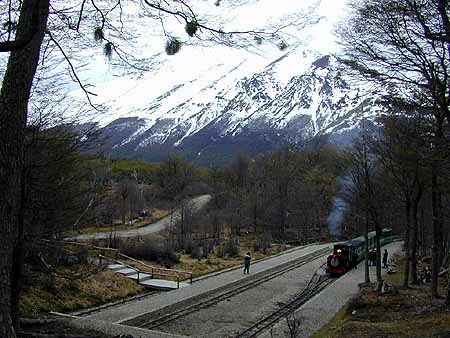 There is a steam train in the park – the train at the end of the world.

Since Tierra del Fuego is an island, introducing non-native species creates problems. Rabbits were introduced at one time and luckily, even though they are great breeders, the environment seems to hold them in check. Trout were introduced to encourage sport fishing, but in the process they eradicated native species. Great care is being taken to ensure that non-native plants or animals are not introduced.

So this is Ushuaia – totally unique and geographically isolated from the rest of the world. Next I’ll cover how Ushuaia uses the internet.

NEXT: Page 2 – Ushuaia and the internet.

Many thanks to Freddy and Paco – a great tour guide and bus driver! Also a big Hola to Eduardo at the Cap Polonio.

SUMMARY: In contrast to the US and what I have seen in parts of Europe, people without a PC can easily rent internet access.

One of the things I needed in Argentina was access to the internet for email. Normally what I do in Europe is prevail on friends to use their PCs. To my surprise, in walking around Buenos Aires I found internet stores all over the place.

Typically these are small stores of about 1000 square feet (300 square meters) packed with terminals, a server and a cashiers desk. There is usually only one person manning the operation using a PC to track time on each terminal and bill accordingly. The prevailing rate in Buenos Aires was $2/hr for 56K, although I did see some stores that featured 256K speeds at higher rates. 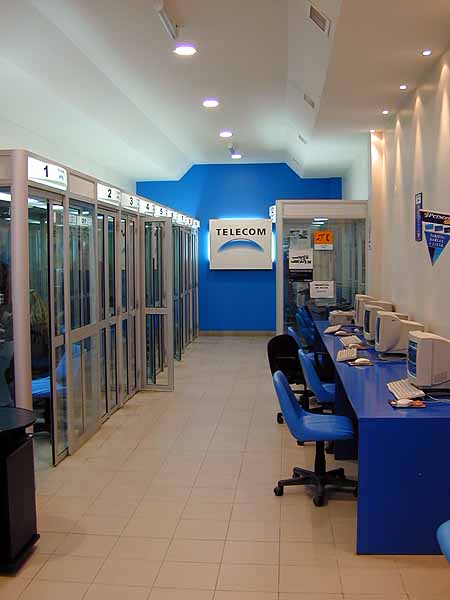 Telecom is a competitor to Telefonica Argentina. Phones to the left, internet terminals to the right.

In Ushuaia, I found the internet stores bundled with telephone booths (not so in Buenos Aires), so these were larger and positioned more along the lines of communications stores rather than just for the internet alone. I found 6 on Ushuaia’s main street of San Martin, ranging from 4-6 terminals to a single PC in a cafe. Speeds were limited to 56K – I asked about higher speed connections and did not find any readily available. 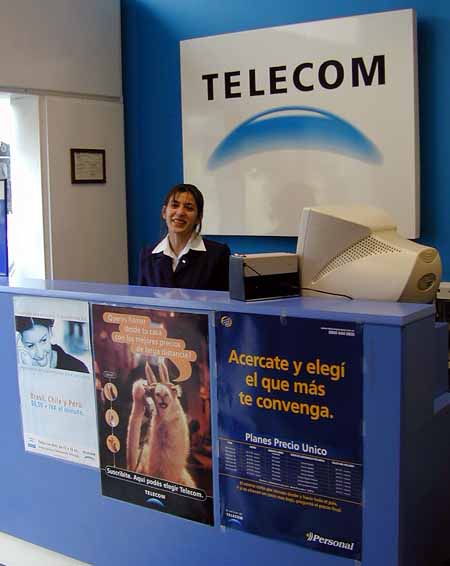 This is Laura who tracks usage time; some bill in quarter hours, some in 5 minute increments. 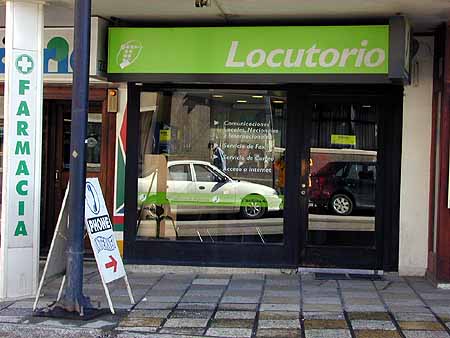 Another internet store; I think Locutorio means something like a “talk store”.

Internet charges in Ushuaia are double what I paid in Buenos Aires – $4/hr. Everything in Ushuaia is more expensive (except the subsidies I mentioned earlier) and the internet is no exception. According to one source, there are something like 10,000 mobile phone users and 3,000 internet customers; for a city of 45,000, these are respectable numbers.

Users run the gamut from teenagers to executives with briefcases – this is definitely not a geek hangout. Based on what I could see on some terminals, email, chat and ICQ are very common URLs accessed. Considering that most people in Ushuaia come from someplace else in Argentina, communicating with the outside world is of very high interest.

Private users pay anywhere from $5/month for basic email internet access (limited hours/month) to $23/month for an unlimited “Premium” account (unlimited access, mailbox, personal web page etc). The most popular plan is $14/month with unlimited access (more details in Spanish HERE). In addition, there are per minute telephone charges; now these are almost all local calls, but it still comes out to something like another $0.50/hour.

All told, basic access looks comparable to what we pay in the US with the exception of per-minute local billing, which is predominant in many areas of the world. What is interesting is the introduction of satellite internet access, something I think we will see increasingly in communications-starved countries. This will give places like Ushuaia high speed access to the world (I should mention that Ushuaia does have something like 50 satellite TV channels).

SUMMARY: PCs in Argentina are not any different from others except that they are more expensive than the US – a fact observed worldwide.

I found four computer stores on San Martin Street in Ushuaia with Regi-Data the largest. I spent some time speaking with them about what they sell and pricing. 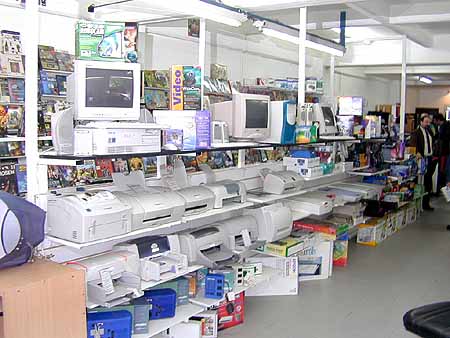 Regi-Data’s display – looks like about any PC store around.

Predictably, overclocking is not a big factor in this market – in fact, pretty much unheard of. Understandable considering that, for most people, a PC is a major investment and “risking” the CPU by overclocking is a road that few can afford. 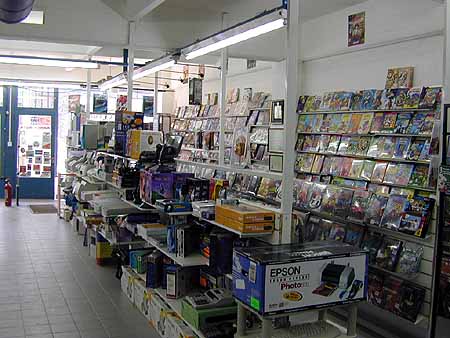 Lots of software; brands are those many are familiar with, like Epson and Lexmark printers.

In visiting the computer stores, I did not find any overclocking boards like ASUS or ABIT; more common are Intel, AOPEN, QDI, DFI, etc. In Buenos Aires, I did find ASUS A7Vs and ABITs. Durons are just starting to filter into the market there but have not found their way south yet. It is, however, well known that Durons overclock like crazy and on price-performance trounce Celerons. One store in Buenos Aires told me they sold maybe one Celeron in the last six months.

If you do overclock, finding heatsinks like an Alpha is very difficult. This is still a market where “stock” products abound and the “exotics” are just that – rare, exotic animals. Water cooling? Loco!

I don’t think you will find Quake running on these machines too often.

In summary, the computing scene in what is one of the most remote areas of the world is not all that different from what you might see just about anyplace else – just understandably more expensive and maybe more conservative. Overclocking and tweaking are not that common either, although growing quickly in the larger cities like Buenos Aires. 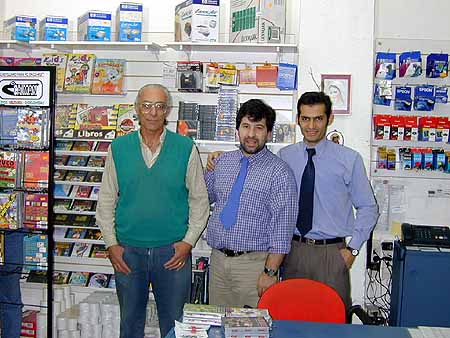 I want to thank the staff at Regi-Data for allowing this loco Norte Americano poke around and look at things. 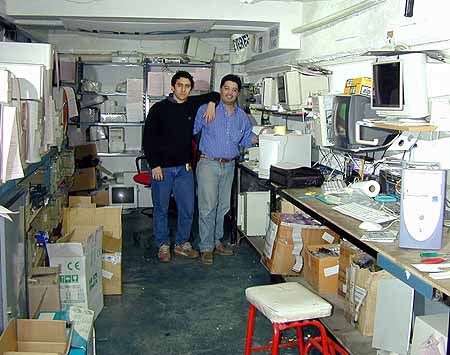 nVidia Learns From ATI These Detonator drivers don’t do a whole lot most of the time (and anyone who think this evens the playing field against the R9700 is a nVidiot), but there does seem to be a problem with

The words “bargain” and “Microsoft Office” are usually allergic to each other. You may be aware that MS is offering a version called “Microsoft Office Student and Teacher Edition 2003,” which includes Word, Excel, Outlook and Powerpoint for as little