SUMMARY: An excellent heatpipe solution for Socket A cooling. 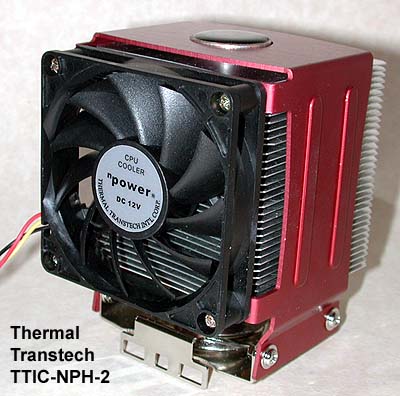 The good guys at Thermal Transtech International Corp. were nice enough to send a sample of their AMD Socket A heatpipe CPU cooler #TTIC-NPH-2 (for a good explanation of heatpipes go HERE.)

A heatpipe is basically a closed tube:

Inside is a liquid that evaporates when heated. As it travels up the tube and condenses back to a liquid, heat is released. The liquid then travels back down to the heatpipe’s base, evaporates again and the cycle repeats.

A look from the side 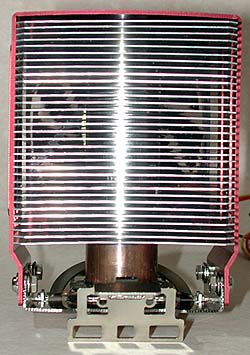 The base of the TTIC Heatpipe is fairly smooth: 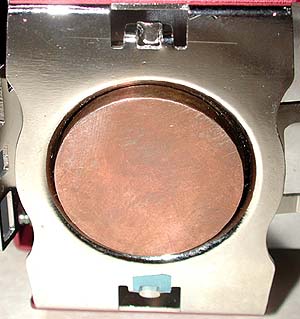 The clip engages all three socket lugs – I found it fairly easy to mount – and it does not require a screwdriver.

The TTIC Heatpipe was tested on the CPU Die Simulator which gives results that are unaffected by motherboard influences.

A very effective, relatively quiet heatpipe solution for Socket A cooling. To date, this is the best heatpipe for CPU cooling I’ve tested.

I’d been sitting for a couple of weeks staring at the lower corner, right hand side of of my monitor, unable to resist watching Mother Board Monitor’s update of my system and CPU temps. Just a month before, I’d been

SUMMARY: I tested one of the first Glaciators off the line – Impressive performance at reasonable noise levels. Millenium’s Glaciator has finally made it to production; as many of you know, Millenium Thermal Solutions came up with a heatsink design