An excellent choice for P4 cooling, although noise preferences must be considered – Joe

SUMMARY: An excellent choice for P4 cooling, although noise preferences must be considered. 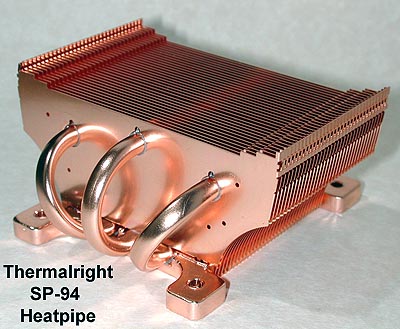 The good guys at Thermalright were nice enough to send one their first heatpipe heatsink to us for a test spin. This unit is available only for P4 cooling. In contrast to some heatpipes I have tested, the heatpipes are soldered to the copper base – some used thermal paste instead, with performance suffering as a result.

Parts shipped with the heatpipe include a bracket which installs on the back of the motherboard: 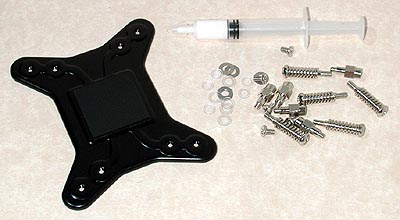 Assembly is fairly straightforward but does require motherboard removal. The spring-loaded bolts hold the heatsink firmly in place. 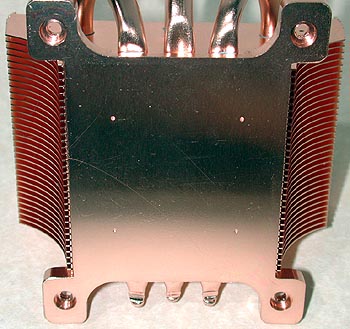 The Thermalright Heatpipe was tested on an Acorp 4S845A motherboard with a modified P4 1500 to read CPU case temps. For testing, I used a Delta FFB0812SHE, 68 cfm @ 4800rpm, 48.5 dBA; this features vanes in the base which straighten airflow into the heatsink. I varied rpms to give a range so users can match performance to noise tolerance.

Die Simulator results place the Thermalright Heatpipe, at a loud 4838 rpm, in the topmost rank of P4 heatsinks tested to date (Heatsink Ranking).

Note that for best performance, socket orientation must be such that the heatsink’s pipes should be either parallel to the floor or the pipes should be at the top of the socket.