Today, AMD has released its latest Threadripper CPU, dubbed Threadripper 2, with a monster 32 core 64 thread 2990WX and the 16 core 2950WX. The new parts are based off the Zen+ architecture and continue AMD’s onslaught of additional cores trumping similar processors from Intel by price and number of cores and threads. The 2990WX flagship is priced at $1799 MSRP while the 16 core 2950X is priced at $899. The 2990WX we have seen available for pre-order (now for ordering) at Newegg.com for $1800 and is sold out at the time of this article. The 2950X will be available on August 31st. 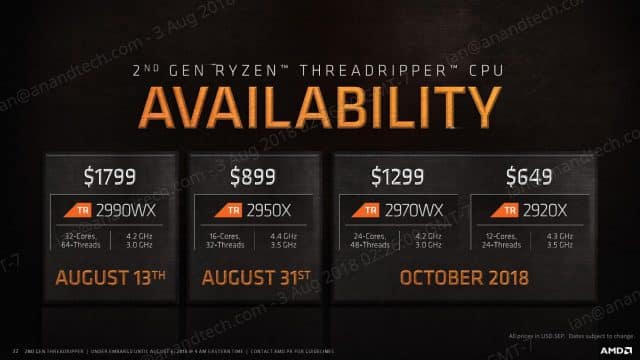 As one can see from the AMD press deck we received above, later in the year, AMD will be offering two other variants with the 24C/48T 2970WX priced at $1299 as well as the 2920X 12C/24T CPU with an MSRP of $649. The four CPU processor lineup should give power users (read workstations, creative content providers, etc) a lot of horsepower to get things done using software that is able to handle all the threads they offer.

The latest CPUs seem to go right for Intel’s jugular on the price per core and the sheer number of cores with current Intel processors on the HEDT platform maxing out with the 7980XE at 18 cores and 36 threads priced at $2000 MSRP (currently priced on Newegg for $1850). We’ll have to wait a bit and see how Intel decided to counter this release with an updated Skylake-SP product we will likely see sooner than later.

At a high-level, AMD uses the same 32-core EPYC silicon but is upgraded to the Zen+ on 12nm for more frequency and less power use. The EPYC processors these were based on use 8-channel RAM but on this platform (and previous Threadripper), that was cut back to quad-channel. The EPYC parts also had 128 PCIe lanes which were cut down to 64 (60+4 for the chipset*). The new TR2 CPUs gain AMD’s Precision Boost 2 which we talked about in the Ryzen 7 2700 and Ryzen 5 2600 review from a couple months back and works in conjunction with XFR2 in order to bring the fastest clock speed while still fitting in thermal and power envelopes. 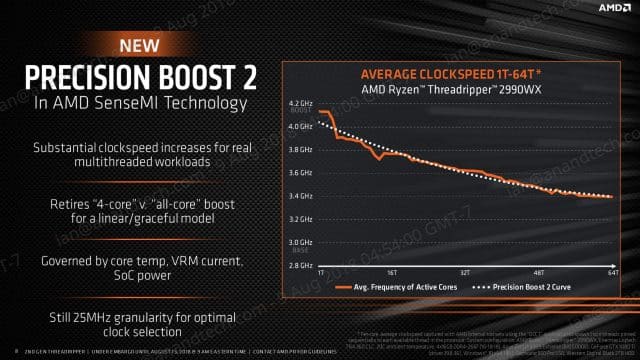 We are currently working with AMD on procuring a Threadripper 2 for review ourselves, but for now, we would like to share a few others reviews until we can get a hold of one and tested in the Overclockers.com way. These articles cover the CPUs very well and should give a lot of the details many are looking for upon release including changes and how the interconnect works, etc.

If there are others, please feel free to link them in the comments below!

Just when some may have thought the dust has settled on AMD’s ‘new’ GPUs, we are seeing the first signs of the gaps being filled in with the R9 270 being released today. This, and perhaps a 250X and 260 should fill in the performance differences nicely between the already released 250, 260X, and 270X that we will see on the front page shortly. AMD markets this card as ‘the highest performing 150W card’, so let us see how that actually works out with our new suite of benchmarks!