An aluminum extrusion, twin fan heatsink that looks cute but is short on performance. — Joe

SUMMARY: Cute looking, but not for aggressive CPU cooling. 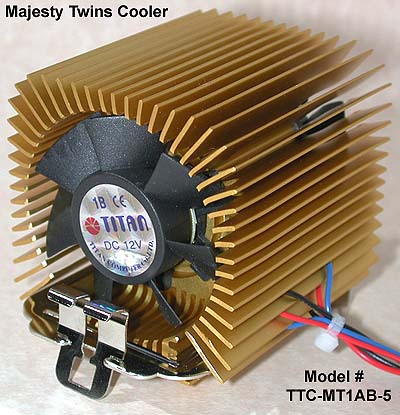 Titan was nice enough to send an interesting twin fan cooler called the Majesty Twin. It is made of aluminum and has fans front and back, one blowing in and one out. The fans are rated at about 12 cfm each. One good thing about this cooler is if one fan fails, there’s always the second one to keep things “under control”. 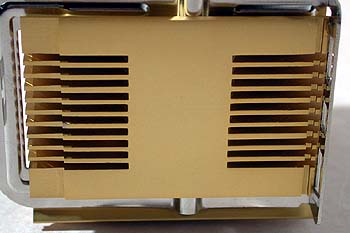 is smooth and free from machining marks. Note that there are openings in the base to dump some cooling air onto the CPU carrier, contributing somewhat to cooling. 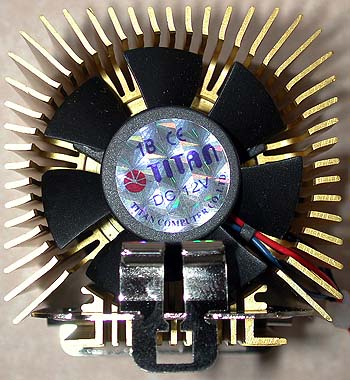 gives some idea of fin surface area. Behind the fans is a solid aluminum core, so the unit is an aluminum extrusion machined to seat the fans inside the fins. The clip is very good – mounting was quick, easy and not CPU threatening.

All told, I like the looks of the Majesty – sort of reminds me of a porcupine.

I prepared the Majesty Twin by boring a hole completely through the base so I could epoxy a thermocouple above the CPU. The thermocouple is attached to an Omega HH23 Digital Thermometer. Ambient temps were measured with a thermocouple placed about 1 inch from the fan’s intake. I used Prime 95 to stress the CPU on an Iwill KK266+ and Iwill BD133u (MBM temps are on-die). Arctic Silver grease was used in all tests. CPU Case Temp is the temp at that point where the CPU contacts the heatsink, CPU Back Temps are measured by a thermocouple on the center back of the CPU.

Two fans make more noise than one (DUH!) but not twice as much. The 50mm fans are rated at 5500 rpm, 12.4 cfm. I measured fan noise with a Radio Shack Sound Meter placed 8″ from the fan’s intake and recorded 64 – about the same as for a single YS Tech.

The Titan was also tested on the CPU Die Simulator which gives results that are unaffected by motherboard influences.

Cute, but not terribly effective for aggressive CPU cooling. Considering the fans’ output and the heatsink’s aluminum composition, I would not have expected to see much in the way of cooling performance.

The Majesty Twin’s C/Ws place it outside of what we consider acceptable for aggressive CPU cooling – C/Ws of 0.32 or below.

Thanks again to Titan for sending this our way. Titan does not have much presence in the US market and is looking for distribution, so if interested, drop them a line.

Appeasing The Volcano: Slowing Down The TT Volcano 12

Slowing down the fan. – Charles Smutz