Begin an avid Intel overclocker, I couldn’t resist ordering one of the new Celeron 1.2 GHz CPU’s based on Tualatin core. For those of you that aren’t aware, this is the start of a new version of the Celeron. Although it is very similar to Celerons made on the Coppermine core, there are some nice improvements.

Perhaps most notable would be the die shrink from 0.18 micron down to 0.13 micron technology. The smaller die size allows for higher clock speeds to be reached and also less heat is generated.

Coming in a close second would be that the CPU now has 256K of 8-way associative L2 cache. Previous Celerons based on the Coppermine core only had 128K of L2 cache and it was only 4-way associative.

Also, the Tualatin CPU’s use an integrated heat spreader. This is basically a metal cap that fits over the core and is primarily there to protect the core from damage and to make it easier to mount the heatsink. It should be noted that Celerons at 1.1 GHz and below are still based on the coppermine core.

The Tualatin core used in the Celeron 1.2 GHz has some interesting history. The Tualatin core is basically a Coppermine Pentium III with a smaller die size (also adds data prefetch, if you want to be a stickler about it). Intel developed it to reach higher clock speeds for the PIII lineup and perhaps also to make more efficient mobile CPU’s (i.e., ones that put out less heat).

Intel has also developed a server version of the PIII based on the Tualatin core. The server version adds an additional 256K of L2 cache bringing the total up to 512K. Intel has ended up concentrating most of their efforts on promoting Tualatin in the mobile market and to a lesser extent in the server market.

I guess we were lucky that Tualatin even made it into the desktop market. Why? Because Intel would rather you buy a Pentium IV. Intel has purposely kept the price high on Pentium III’s (especially the Tualatin versions) so that it would make the Pentium IV look like a better buy.

Intel has pretty much killed the PIII desktop line and the highest CPU we will probably see (not counting the server version) is the 1.2 GHz version which has been out for several months. So Intel has basically decided to take the desktop version of the Tualatin and change the name from Pentium III to Celeron. In the process, the only crippling change that they made was to have it run on 100 MHz front side bus (FSB) while the Pentium III version run on a 133 FSB.

Alright, that’s enough of the boring stuff. I’ll head toward the results now. Please note that your results may differ and also there were some modifications that had to be done to the CPU to get these results. Although the modification is relatively safe if done correctly, I accept no responsibility if your system or CPU gets damaged.

The CPU itself was made in Malaysia in week 38 and was just packaged on October 16th. The default voltage on the CPU is 1.475V. In order to get higher overclocking results, the voltage will have to be raised.

The Abit ST6-R will only allow you to raise the voltage 0.125V above the CPU’s default. This would get us up to 1.6V. I knew I was going to need more voltage than this. I used a modification known as the “wire trick” or “pin wrapping” to set the CPU’s default voltage higher.

It basically involves taking a very thin and short piece of wire and wrapping it around 2 of the CPU pins on the bottom of the processor. I was able to increase the default voltage on the CPU to 1.675V by doing this. To get a better idea of exactly what pins you need to connect, look for my posting HERE.

There is a link so that you can download the spec sheet for the Pentium III Tualatin. This modification works exactly same way with the Celeron Tualatin.

For cooling, I initially used the Gladiator heatsink, but near the end I switched to the Millenium Glaciator to get better results. I also coated the integrated head spreader with Arctic Silver. I first booted up at 1.2 GHz and default voltage and everything worked fine.

I then upped the voltage up to 1.675V and headed straight for 133 FSB (1.6 GHz) but the system would not even post. I should note that in the BIOS I actually set the FSB to 132 MHz but the WCPUID actually indicates that this is 133.37 MHz.

I then raised it up to 1.775V and she posted and loaded windows OK. It ran Sandra benchmarks OK, but would lockup in Quake3 and crash back to the desktop in 3DMark2000. I then upped the voltage to 1.8V but pretty much got the same results. I was getting a little bit discouraged but I knew I was close.

I was initially using the Gladiator heatsink with a 26 cfm YS Tech fan. I switched to the Millenium Glaciator and temperatures dropped by about 2-3° C and everything was finally stable using 1.8V. I was able to loop 3Dmark2000 without any crashes for right around 30 hours. I also took a 2CoolPC ducting unit and put in the case for extra cooling. So there you have it – a Celeron 1.2 GHz @ 1.6 GHz which is essentially the same as Pentium III 1.6 GHz CPU. 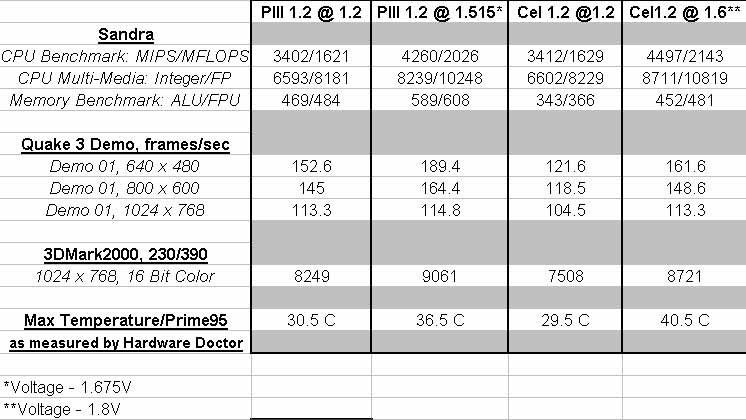 Sorry about not having a wide variety of benchmarks, but hopefully this gives you a good idea of what to expect. All of the benchmarks were done using 2-2-2-7/9 memory settings (even at 167 FSB). From the benchmarks, you’ll notice that my Tualatin PIII 1.2 @ 1.5 GHz beats the Celeron 1.6 GHz in most of the tests despite the Celeron being 100 MHz faster.

Memory bandwidth makes all of the difference in this case.

No, I don’t mean someone so ugly you need to put ten bags over the head before loving.  Well, at least John Dvorak didn’t mean that.

AM2+ Denebs: Doomed To Die

What lies underneath the metal cap. — Julina Stenning.